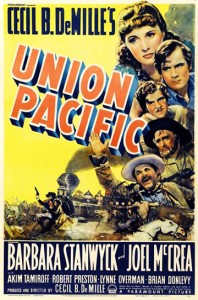 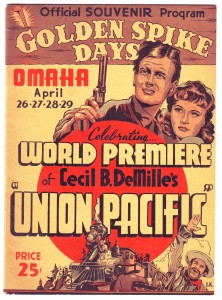 In the movies’ greatest year, we had this rare western by one of the cinema’s greatest showmen.  It obviously had a big budget, being made in the DeMille style, and was promoted very expensively.  As well as being a great year for movies generally, 1939 was also a good year for westerns, with this, Dodge City, Stagecoach, Destry Rides Again, Frontier Marshal and the misbegotten curiosity The Oklahoma Kid. 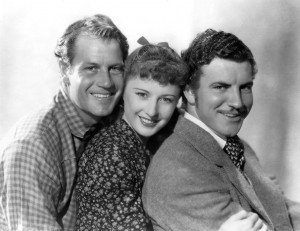 Joel McCrea, a bigger star than John Wayne at the time, is Jeff Butler, a troubleshooter for the Union Pacific Railroad at the End of Track, wearing two guns with pistol butts facing forward.  His childhood and Civil War friend is Dick Allen (Robert Preston, charming in his first big part), now in the process of drifting over to the dark side for a big score.  They are both romantically interested in Molly Monahan, played with a painfully thick Irish brogue by Barbara Stanwyck.  Brian Donlevy, as one would expect, is the principal villain as Sid Campeau, the slimy saloon owner who corrupts Allen.  (See a young Anthony Quinn briefly as a sleazy gambler and Campeau confederate Jack Cordray, who tries to shoot Butler in the back.  The screen’s original Tarzan, Elmo Lincoln, is said to be an uncredited player in this, too.) 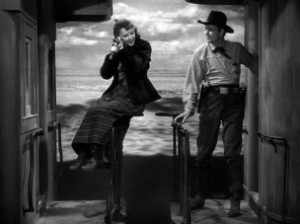 Its overarching story is the driving of the Union Pacific railroad line westward after the Civil War to meet the Central Pacific, overcoming all obstacles:  outlaws, Indians, snow, unmet payrolls and unfriendly mountain terrain.  The golden spike used in the meeting-of-the-lines scene is the real spike from 1869, borrowed from Stanford University.  McCrea and Preston are very good in this, Stanwyck a little less so, although that may not be her fault with her part written so faux-Irish.  Butler ultimately values his friendship with Allen and is able to escape hanging his friend, even when it becomes obvious that Allen has been involved in train robberies.  As one would expect, Allen redeems himself as he dies at the end.  At this stage of his career, Preston seemed to specialize in this kind of a role–the friend who goes bad (see North West Mounted Police, Whispering Smith and Blood on the Moon, for example). 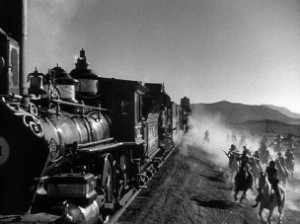 There’s a fair amount of spectacle here, with two train crashes (one caused by Indians, one caused by snow) and a major Indian attack, in addition to the nefarious outlaws.  It’s in black and white, but so were most movies in 1939, especially westerns.  (The exception:  see Dodge City, below.)  Compare this with the later (1941) technological western and winning-of-the-west epic Western Union, featuring Randolph Scott as the conflicted lead who has to sort out his loyalties while (a) being tempted by the dark side and (b) playing off straight arrow Robert Young.  Both movies are quite watchable.

DeMille didn’t make many westerns, but some would say that he invented the feature-length western with The Squaw Man in 1914.  By 1939, he’d been making movies for more than 25 years already. 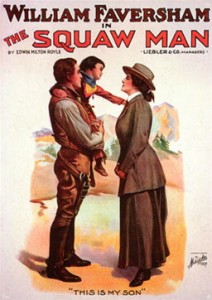