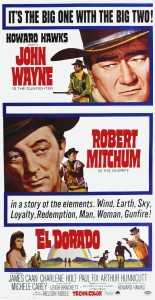 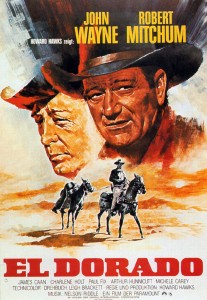 Seven years after Rio Bravo (1959), director Howard Hawks largely remade the same story with the same leading man:  John Wayne as gunman Cole Thornton in El Dorado.  Wayne is seven years longer in the tooth (now at age 58), and it shows.  Although he has a (much younger) romantic interest in Charlene Holt’s Maudie, the romance doesn’t really provide the audience with the same kind of interest that the (much younger) Angie Dickinson did in Rio Bravo.  El Dorado is still quite watchable, if not in the same classic category as Rio Bravo; i.e., it’s not as bad as the eventual third remake (and Hawks’ last film), Rio Lobo (1970).

Why isn’t it as good as Rio Bravo, aside from an older lead?  Two reasons:  the story is slightly more complicated and doesn’t hang together as well (i.e., the writing is not as good), and the cast by and large isn’t as differentiated and doesn’t have the same chemistry.  Robert Mitchum as alcoholic sheriff J.P. Harrah is older than Dean Martin and has a different chemistry with Wayne—more equal.  He’s good, though different.  Neither of the female characters has the same charisma as Dickinson, although the writing isn’t as good for them here, either.  Ed Asner as Bart Jason is in his unappealing glowering villain mode (e.g., Skin Game) without much variety in his small one-note part.  Christopher George as Jason’s hired gunman Nelse McLeod is snakily charming, and George apparently became a favorite of John Wayne’s (getting future parts in Chisum and The Train Robbers); too bad for him it was so late in Wayne’s career. 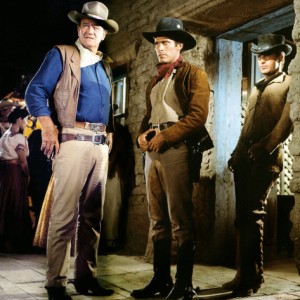 A young James Caan becomes slightly tiresome with his silly hat (we don’t care about it as much as the characters seem to), inability to shoot a gun, frequent quoting of the Poe poem of the title and especially with his unconvincing imitation of a Chinaman.  A significant part of his problems may be in the writing of his unnecessary character; cf. Ricky Nelson in Rio Bravo and Stuart Whitman in The Comancheros, both better in similar parts as Wayne’s apprentice.  Caan was a better actor than Nelson, but the script doesn’t work in his favor.  At least there’s no singing here.

R.G. Armstrong is Kevin MacDonald, head of the numerous MacDonald clan.  Thankfully, he’s not always spouting Bible passages, as he seems to in most Sam Peckinpah movies in which he appeared.  The ensemble never really comes together.  The one role that may be better than the original is Arthur Hunnicutt as bugle-playing Bull, in the Walter Brennan cantankerous old deputy part.  (For other Hunnicutt performances, look for him in The Tall T, The Big Sky, Two Flags West, Broken Arrow and even with a cameo as a too-old Butch Cassidy in Cat Ballou.) 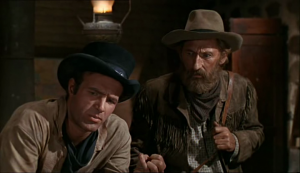 Wayne’s Cole Thornton is an aging gunman, not so convincing here with a pistol.  He sometimes seems to wear it around his butt; he’s better with a longarm as a favorite weapon (Hondo and Rio Bravo).  The story is in two parts.  In the first part, Thornton is offered a job in the town of El Dorado by Bart Jason, asked to use his gun skills to drive the largish MacDonald family off their ranch so Jason can get their water rights.  Thornton refuses but unintentionally kills one of the younger MacDonald sons, played here by Johnny Crawford of the television show The Rifleman.  Sister Joey MacDonald (Michele Carey, with big hair, a useless hat, tight pants and a supposedly feisty attitude) shoots Thornton in the back, giving him a continuing injury which results in occasional pain and paralysis in his right (shooting) hand.  (You can see the climax coming now, right?)

In part two, several months later in another town Thornton encounters McLeod, hired by Jason for the job Thornton had refused.  McLeod is now headed to El Dorado with a band of gunmen.  Thornton helps out knife-throwing Mississippi (Caan) in a bar room dispute, acquires him as an unwanted partner, and hears that his old friend Harrah has become a drunk over a bad woman, although he’s still the sheriff.  Thornton gets to El Dorado barely before McLeod and tries to sober up Harrah.  After a little more development, the shooting of one MacDonald son and the kidnapping of another by the sleazy Jason minions, Thornton participates in a climactic shoot-out which would be unchivalrous except for Thornton’s impairment. 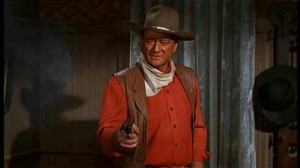 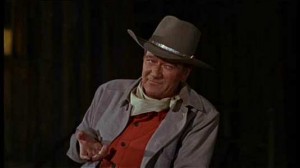 Taken directly from Rio Bravo is a scene in which Thornton and Harrah pursue an assassin into a bar and the boozy Harrah gets the evildoer while facing down a crowd that treats him contemptuously.  This time the scene is not as good as the original, although Mitchum does kill a piano.  (If the bartender seems sort of familiar, he is played by Jim Mitchum, Robert’s brother, and there’s a physical resemblance.)  In the end, it seems that Thornton gets Maudie (or she finally gets him), but the movie doesn’t really care much about that.

There are some noticeable continuity problems.  Consider the wounded characters (Thornton and Harrah) constantly switching the arms their crutches are under, or Joey MacDonald’s wet and not wet butt in the scene where she shoots Thornton.  This wouldn’t seem to be careful direction from the normally masterful Hawks.  Other elements (lighting, camera angles, composition, etc.) are what you’d expect from a master. 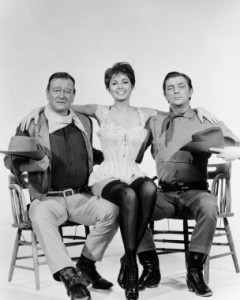 Production still of stars John Wayne, Charlene Holt and Robert Mitchum. One of them seems to be underdressed.

Robert Mitchum said later that when Howard Hawks asked him to be in the film, Mitchum asked about the story of the film.  Hawks reportedly replied that the story didn’t matter because the film had some “great characters.”  That attitude toward the story is the cause of the movie’s weaknesses.  There are too many characters and the story never entirely comes together, despite the fact that the screenwriter is Leigh Brackett, an excellent writer who worked on Rio Bravo and a number of other Hawks classics.  Of course, she also worked on Rio Lobo, which was to be even worse than this one.  The script here has some good lines.  Thornton:  “Either one of you know a fast way to sober a man up?”  Bull:  “A bunch of howlin’ Indians out for hair’ll do it quicker’n anything I know.”  But the whole is somehow less than its parts.  This, The War Wagon and Big Jake are similarly watchable, but not great, westerns from the same late period in Wayne’s career—not as bad as either Rio Lobo or The Train Robbers.  And better than Chisum and Cahill U.S. Marshal, even.  Even if he was John Wayne, he needed a good premise, good writing, and roles that took his age into account.

This didn’t mean that Wayne’s career was basically done or stuck in endless repeats, though.  He would yet play one-eyed marshal Rooster Cogburn in True Grit the next year (1968), for which he won his only Oscar, aging rancher Wil Andersen in The Cowboys (1972), and J.B. Books in The Shootist (1976).  He was at the top of his game in all those, and they are better movies than El Dorado.

Shooting on the film started in late 1965. The movie was trade-screened to exhibitors on 15 November 1966 but not released until June 1967—about the same time as The War Wagon.  Both did well enough at the box office. 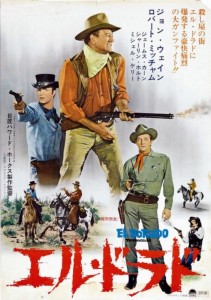 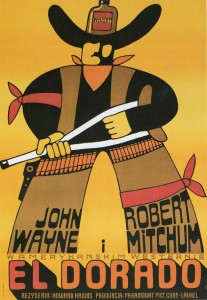 Howard Hawks didn’t really make many westerns–only five–although he did have a long and illustrious career as a director of movies.  If you throw out his last movie and worst western (Rio Lobo), the remaining four (Red River, The Big Sky, Rio Bravo, and El Dorado) stand up pretty well.

Trivia:  A belt buckle that John Wayne sports in many scenes features the Red River D brand, an homage to his first collaboration with Howard Hawks twenty years earlier in Red River (1948).  The opening credits feature a montage of original paintings that depict various scenes of cowboy life in the Old West.  The artist was Olaf Wieghorst, who appears in the film as the gunsmith Swede Larsen and provides Mississippi with his sawed-off shotgun sidearm.  This same kind of montage was used for the opening credits in Chisum.

More trivia:  El Dorado is not only the name of the town where the Robert Mitchum character is sheriff and where much of the action takes place.  It is also the name of a poem by Edgar Allan Poe, quoted more than once by Mississippi.  Name another western in which the Poe poem is quoted by a character.  For the answer, click here.