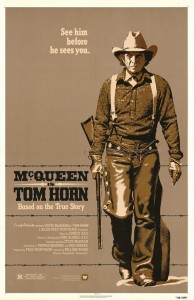 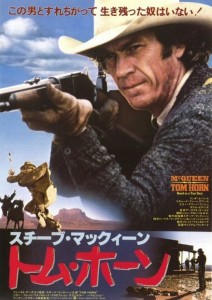 This was the penultimate movie for 50-year-old Steve McQueen, who was dying of cancer in 1980.   It’s the story of a famous stock detective who hunted down rustlers in Wyoming around the turn of the century after a career as an Indian scout in Arizona.  He is now, and was then to some degree, an anachronism and a symbol of a freer and more open time on the frontier.  Even in Wyoming, the frontier was closing down and law had to be served.  Based in some significant measure on the memoirs of the actual Horn, some parts are remarkably accurate historically and others less so. 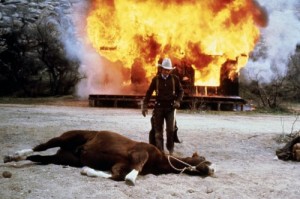 Death and devastation seem to accompany Horn, regardless of how much of it he actually intends.

Horn’s principal tool is his rifle, with which he is remarkably accurate at long distances.  “The rifle Horn uses to such deadly effect in the film is an original Winchester Model 1876 in .45-60 caliber, fitted with a custom tang sight.  Manufactured from 1877-1894, the Model ’76 was an obsolete arm by the turn of the century, when the events of the story take place.  All the available historical sources state that Horn actually used a .30-30 Winchester Model 1894 for his controversial activities as a ‘stock detective’ in Wyoming.”  That is to say that Horn’s rifle in this movie is slightly anachronistic, but that’s quite common in westerns.

Beginning in 1901, in what looks to be too small a town for Cheyenne at that time, Tom Horn is hired by a group of Wyoming ranchers as a stock detective to stop rustling.  By most accounts, Horn’s method of stopping them was to pick off supposed rustlers at long range; this shows him mostly facing his opponents with the above-described rifle.  A couple of Horn’s victims were shot in Brown’s Hole on the opposite (southwestern) side of Wyoming.  The movie shows Horn as probably not being guilty of the murder (of a fifteen-year-old boy) for which he was hanged, but inarticulate and unable to cope with the process that condemns him.  Horn is finally done in by a conspiracy among the ranchers who hired him and then needed to distance themselves from the effects of his work.  And by an inaccurate transcript of a drunken conversation, which he does not bother to correct.  Horn’s last words, to the sheriff:  “Keep your nerve, Sam, ’cause I’m gonna keep mine.” 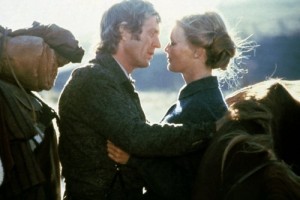 The dying McQueen makes Horn’s world-weariness and unwillingness to defend himself believable, if not entirely understandable.  Linda Evans is Glendolene Kimmel, a school teacher and romantic interest of Horn’s.  Richard Farnsworth is excellent as John Coble, the prime mover among the ranchers who remains loyal to Horn.  Slim Pickens is effective as Sam Creedmore, the sheriff in Cheyenne.  Rather an elaborate execution by hanging at the end, with an automated gallows.  Not enough background is given on why Horn is a legend of the west (i.e., his activities as a scout against the Apaches in Arizona), or his relationship with Glendolene.  The movie is shot with lots of stark browns and grays, and the second half is slow-moving. 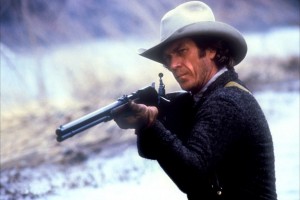 This is an end-of-an-era western, shot in early 1979 and released in 1980 at a time when very few westerns were being made and McQueen’s career was no longer very active (no major commercial films since 1974’s Towering Inferno).  “If you really knew how dirty and raggedy-assed the Old West was, you wouldn’t want any part of it,” Horn tells Glendolene, who ultimately does not stick with him.  The actual deputy U.S. Marshal Joe LeFors, who set up Horn and testified against him, is here renamed Joe Belle (played by Billy Green Bush) for some reason.  There is a brief performance by an aging Elisha Cook, Jr. as a stable hand.

The making of this movie almost defines the term “troubled production.”  That by itself doesn’t mean a movie will be terrible, but when that many things go wrong, it becomes much harder for such a collaborative effort to turn out well.  Five directors worked on this film, but most were either fired or left because of disagreements with McQueen, who is credited as the producer.  It is widely believed that McQueen directed much of the movie himself.  One of those said to be associated in the early stages was Sam Peckinpah, but he and McQueen had a falling out (as Peckinpah often did with producers).  “Neither Don Siegel nor Elliot Silverstein made it past pre-production.  Electra Glide in Blue director James Guercio only lasted for the first three days of the shoot, and cinematographer John Alonzo and McQueen himself also had a hand in the finished film at one point or another, with credited director William Wiard apparently hired only to placate the Directors Guild when they wouldn’t allow the star to direct himself.  The screenplay went through many changes along the route as well, with Thomas McGuane’s 450-page epic being constantly chipped away, Abraham Polonsky’s rewrite being rejected and Bud Shrake’s final script eventually alternating with McGuane’s depending on which version the star felt like filming that day.  And just to add to the good news, the picture suffered from major budget cuts due to studio politics and the threat of a William Goldman-scripted Robert Redford rival project (eventually made for TV with David Carradine as Mr Horn).  It shrank from a three-hour $10m epic about the Indian tracker and interpreter’s life to a $3m small-scale Western about its ignominious end.”  Score by Ernest Gold.  Shot in subdued color, in Arizona. 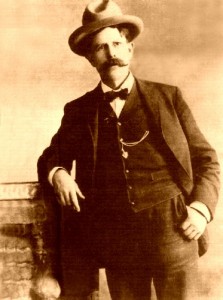 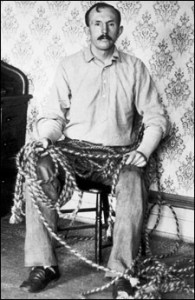 The citified gent on the left is the actual Joe LeFors, the competent Wyoming lawman who pursued Butch Cassidy, captured Horn and extracted a (perhaps inaccurate) sort-of-confession by getting Horn drunk.  On the right is the real Tom Horn in 1903 while incarcerated awaiting his execution.  He’s making the rope that will be used to hang him.

McQueen didn’t actually make many westerns, although he seems very much like a western star.  Tom Horn was also played by John Ireland in the 1967 Fort Utah, which hardly anyone has seen, and by David Carridine in the 1979 made-for-television version of the story, Mr. Horn.  This is better than both of those, but that’s not saying much.  The definitive version of Tom Horn’s story has yet to be made.

McQueen did make western screen history with one element of the production design here.  This movie marks the re-introduction of the traditional big cowboy hat to westerns, after several decades of 1950s-styled hats.  Now a western with any pretension to authenticity is likely to include more historically-correct hats, which have been worn with great success by Tom Selleck (see Quigley Down Under, for example), among many others.