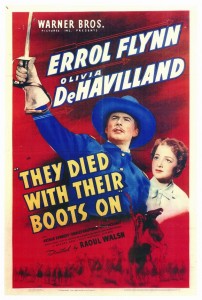 From the heyday of the Flynn-de Havilland partnership comes this old-fashioned, adulatory and not-very-factual biopic of George Armstrong Custer, depicting both his Civil War service and his demise at the Little Bighorn.  In fact, it was their eighth film in seven years and their last film together.  Errol Flynn in a mullet is Custer; De Havilland is his wife Libby.  This was clearly a big budget production for its time, and it has a longer-than-average running time, too—140 minutes.  Flynn and De Havilland are watchable, but the plot neither makes much sense nor does it follow history very well. Plebe Custer doesn’t get along with Ned Sharp at West Point.

The first half of the movie shows Custer at West Point, doing badly, making it into the Union army during the Civil War as a cavalry commander, wooing and marrying his wife Elizabeth Bacon, developing a headlong and heedless attacking style and then becoming an Indian fighter after the war.  In the later portion of his career, it shows him fighting on behalf of the Indians against those dishonest whites who would sell them alcohol, not slaughtering them in search of further military acclaim.  And, of course, in the end he dies with his entire Seventh Cavalry at the Little Bighorn. 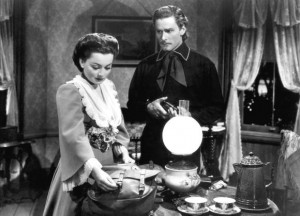 Taking a final leave of Libby before heading for the Little Bighorn.  And Custer still doesn’t get along with Ned Sharp.

The historical Custer was a relentless glory hound without much scruple.  This film captures his headstrong quality but makes him out to be much more admirable and somewhat smarter than he actually was.  Flynn was always watchable at this stage of his career, and de Havilland makes an admirable Libby.  A young Arthur Kennedy is Ned Sharp, an unscrupulous Civil War nemesis of Custer and a later an unscrupulous sutler whom Custer tricks into dying with the Seventh Cavalry.  A young Anthony Quinn is Crazy Horse, who was never captured by Custer as this movie depicts.  The plot points about Custer cleaning up Fort Lincoln and fighting a corrupt Indian agent-supply system are fiction.  Here Custer fights supposedly fictional reports of gold in the Black Hills; actually, Custer led the expedition that first found gold there, and he abetted the influx of whites to the area instead of resisting it.  The movie omits the massacre of peaceful Cheyennes that Custer carried out on the Washita. At his last stand. Worth watching for Flynn and de Havilland, and to get a sense of how Custer used to be seen 70 years ago after his widow had spent the 50 years after his death publicly tending the flame of his heroic memory.  (The real Libby died in 1933.)  The action is good.  Well made for its time.  Hattie McDaniel is what she usually was, a mammy-type domestic to young Libby—a stereotype that doesn’t play so well now.  George Grapewin is California Joe, a crusty and colorful civilian scout for Custer.  Sidney Greenstreet is Gen. Winfield Scott, who initially advances Custer’s career (although it seems unlikely the two ever really met and the elderly Scott played no active role in the Civil War).  An aging Jim Thorpe was said to have been an uncredited extra on this movie, and he claimed to have decked a belligerent (and typically drunk) Flynn.  Custer was as bad a student at West Point as this movie depicts, however.  The depiction of Indians is fairly sympathetic for 1941.  In colorful black and white.  Music by Max Steiner. 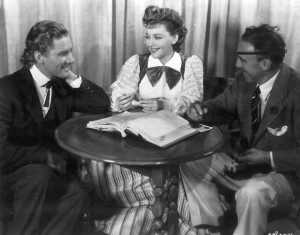 Walsh with his stars.

Raoul Walsh was a main-line director from 1913 into the 1960s, today remembered more for gangster movies (The Roaring Twenties, High Sierra, White Heat) than for westerns, although he made a number of those, too.  This one goes with his The Big Trail (1931, starring John Wayne in his first leading role) and Colorado Territory (1949, a remake of his High Sierra in an older western setting with Joel McCrea and Virginia Mayo) as eminently watchable examples of his work in westerns.  One of his earliest films was a quasi-documentary The Life of General Villa (1912 and 1914, both now lost), starring Villa himself.  Walsh, who did some directing with Christy Cabanne, had a bit part playing Villa as a young man, although his career as an actor was largely over by 1915.  The Villa film was made when Walsh was only 19 and Villa was still regularly in the U.S. news in a positive way, two years before his attack on Columbus, New Mexico, provoked a punitive (and largely futile) expedition under Gen. Pershing.  The film has apparently been lost, and its making became the subject of a 2003 HBO film And Starring Pancho Villa as Himself.