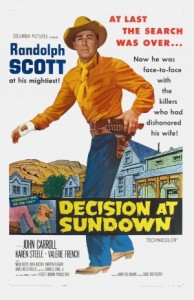 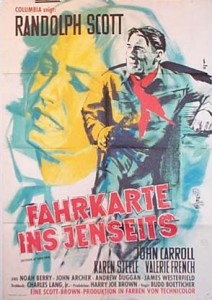 Unlike most of the other Ranown westerns of the late 1950s, this one takes place mostly in a town.  The opening shot is not a lone rider making his way through the distant rocks of Lone Pine.  And the normally solitary Randolph Scott character has a sidekick played by the amicable Noah Beery, Jr..  And it’s written by Charles Lang, not Burt Kennedy, who wrote the best of the Ranown westerns directed by Budd Boetticher.  There are stories, however, that Kennedy did most of the writing without being credited.

However, Bart Allison (Scott) is seeking vengeance for matters relating to the death of his wife, as is usual with Scott characters in Boetticher movies.  He’s after Tate Kimbrough (played slimily by John Carroll), the corrupt town boss of Sundown, who’s about to marry spunky and beautiful young Kate Summerton (Karen Steele, who was Mrs. Budd Boetticher).  Allison is a Civil War veteran who’s heard that a dalliance with Kimbrough while he was gone led to his wife’s suicide.  There are good side characters in this one:  Ruby James (Valerie French) is Kimbrough’s long-time living-above-the-saloon paramour who’s not entirely reconciled to the marriage; Doc John Storrow (John Archer) has his own questions about Kimbrough, as does local rancher Morley Chase (Ray Teal). 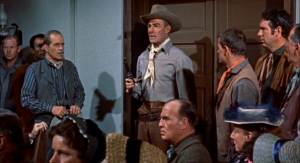 Breaking up the wedding.

By speaking up at Kimbrough’s wedding, Allison and Sam immediately are hunted by Kimbrough’s minions, including his pet sheriff (Andrew Duggan).  The battle takes most of the movie, as Kimbrough’s men take out Sam and Allison kills the sheriff.  In the end, however, though Kimbrough is a moral leper, he doesn’t actually deserve Allison’s vengeance because Allison’s wife dallied with a number of men.  The resolution is interesting; Allison gets his revenge, but not the way he thought he would.  And he’s not happy about it.  He’s not as admirable a hero as most of the Scott-Boetticher characters.  This is yet another case where the hero played by Scott doesn’t get Karen Steele, who probably ends up with the doctor. 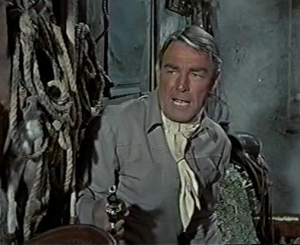 This is an interesting variation on the cowardly townspeople theme, though.  (High Noon, At Gunpoint, The Tin Star, the original 3:10 to Yuma, etc.)  It’s not, perhaps, one of the very best of the Ranown westerns, but better than an average western nevertheless.