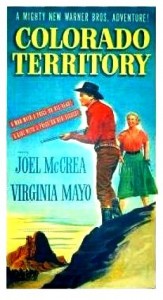 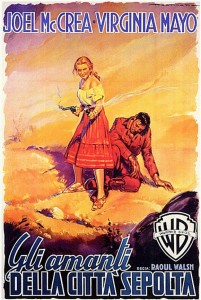 Raoul Walsh’s 1941 gangster movie High Sierra is here remade by the same director as an excellent western, set in Colorado Territory in 1871.  Long-time outlaw Wesley McQueen (Joel McCrea) is in a Missouri jail, waiting transportation to Leavenworth.  He gets sprung from jail at the instructions of The Old Man, acting through one of his agents with the curious name of Pluthner.  McQueen heads west, toward Colorado Territory, where The Old Man, kind of a criminal mastermind by the name of Dave Rickard (Basil Ruysdael), lives.

On the stage west, McQueen meets a Georgian named Fred Winslow (Henry Hull) and his daughter Julie Ann (Dorothy Malone, with dark hair and her trademark eyes).  When outlaws attack the stage, killing the driver and shotgun rider, McQueen fights them off and brings in the stage.  He heads for the meeting place with a new gang, a deserted mountain village called Todos Santos.  The Winslows head off for their new ranch, Rancho del Sol, which they find to be less than advertised—less water, less stock, etc. 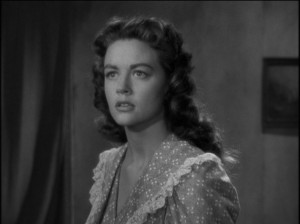 The women:  Dorothy Malone as the ultimately faithless Julie Ann.

McQueen at this point would like to go straight, and he’s not impressed by the other gang members The Old Man has lined up:  Duke Harris (James Mitchell), a bully and killer; Reno Blake (John Archer), slick and cowardly with a waspish tongue; and Colorado Carson (Virginia Mayo), a part-Pueblo dance hall girl from El Paso.  He tells Colorado to leave, since he can see she ignites trouble between Duke and Reno.  He wants to go straight, and he’s attracted by Julie Ann. 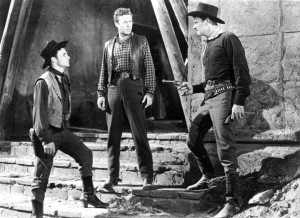 McQueen heads for Pacheco to talk with The Old Man, stopping by Rancho del Sol.  The Winslows aren’t doing well, and he hears some backstory about Fred’s worrying about Julie Ann’s attraction to a Randolph back home—much above the Winslows in social class, and who’s never going to marry her.  The Old Man’s in rough shape health-wise, but he talks McQueen into leading this last score.  McQueen has strong misgivings about all aspects of the job:  Reno, Duke, a garrulous, corrupt train conductor (Ian Wolfe), and especially about Pluthner.  He leaves $1000 with the Winslows, but feels (a) he’s sinking deeper into a moral morass, and (b) Julie Ann may not be as pure as he imagines anyway.  Colorado’s obviously attracted to him, and she seems like she could be a better match for somebody like him notwithstanding her past.

As the gang carries out the robbery, the talkative conductor has squealed to the marshal, and Duke plans to kill McQueen during the robbery.  McQueen is successful in getting the loot, and he escapes with Colorado, a posse in hot pursuit.  As he stops by Pacheco, he finds The Old Man dead and Pluthner going through his stuff.  Pluthner pulls a gun; McQueen kills him but is wounded in the shoulder. 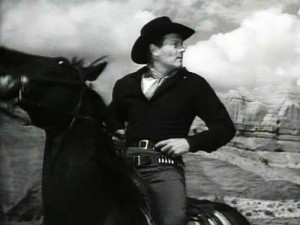 McQueen (Joel McCrea) looks to get away after a final robbery gone wrong.

At Rancho del Sol, Colorado patches him up, and he realizes that his future, if there is any, lies with her.  In fact, Julie Ann tries to turn McQueen in to the posse for the reward on his head.  At Todos Santos, McQueen and Colorado conclude that they have to head for Mexico immediately, and Colorado hides the $100,000 in loot above the confessional in the old church.  McQueen tries to draw off the posse, heading for an old canyon pueblo called the City of the Moon.  The posse overtakes him there, as does Colorado.  With a ruse, the marshal lures McQueen out to where he is hit by an Indian sniper.  Colorado, blazing away with two guns, is shot down, too.  (See the Italian poster for the movie, above, which focuses on this scene very colorfully.)  They are together in death. 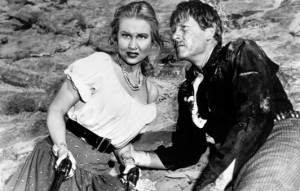 Colorado Carson (Virginia Mayo) and McQueen (Joel McCrea) are trapped by a posse.

As with Pursued, Yellow Sky and Blood on the Moon, this has a strong noir influence.  McCrea’s basic decency makes a reforming McQueen believable, although some think he’s too decent to be credible as an outlaw.  Watch how naturally McCrea rides in this; he and Randolph Scott were probably the best riders among major western stars.  This may be one of Virginia Mayo’s best roles, although the dark makeup she wears doesn’t go with her light eyes and natural coloring.  When posters feature a prominent female image, you can’t always count on the female being central to the movie.  This one features strong female roles.

In black and white, making good use of mountain settings.  The pueblo where the final shoot-out takes place looks like it might be Canyon de Chelly.  The movie was filmed around Gallup, New Mexico.  A good screenplay by John Twist, with very effective dialogue, although some of it has a 1940s flavor now.  Something about this one spawned an unusual number of colorful posters internationally. 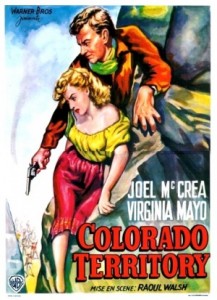 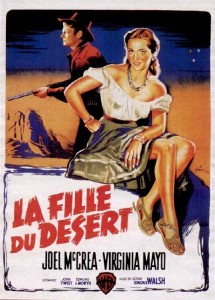