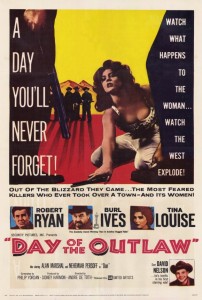 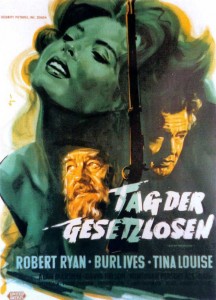 Apparently a low-budget, late black and white western filmed in 1959.  The cast features good actors (Robert Ryan, Burl Ives) who were not big stars.  A decade before The Wild Bunch, Ryan was already aging and craggy-faced.

It is winter in the remote town of Bitters, Wyoming, where a range war is about to break out between recently-arrived farmers who want to fence the range and long-term stockmen who built the town.  Representing the stockmen is Blaise Starrett (Robert Ryan), who’s been conducting a year-long affair with Helen Crane (Tina Louise), wife of Hal Crane (Alan Marshall), a leader of the farmers.  Starrett makes the same arguments as Ryker, the long-time rancher in Shane, about having cleared the country of Indians, outlaws and gunfighters, only to have clueless easterners and farmers move in thinking to take advantage of his years of danger and work without making any contribution themselves.  This speech is one of the movie’s longest.  After watching Shane, we can see that Starrett seems to be on the losing side of history, and morally he’s in the wrong because of his affair with Helen Crane, who has decided (mostly) to stay with her husband.  The connection with Helen seems to fuel the animosity between Starrett and Crane, but there’d be enough reason for it even without that. 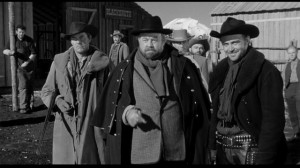 After the movie’s extended set-up, Starrett is facing off with three farmers including Crane, when in comes an armed gang of outlaws and thugs led by former Union cavalry captain Jack Bruhn (Burl Ives).  They take over the small town and threaten everybody in it, especially the women.  Bruhn’s been wounded by the cavalry pursuing the gang and needs medical attention.  The outlaws are clearly a depraved bunch, barely held in check by their strong-willed captain (much like the Lee J. Cobb character in Man of the West, made about the same time).  The exception to this depravity may be young Gene (David Nelson), the gang’s newest recruit, who is not yet thoroughly corrupted and who is attracted to the youngest and blondest of the town’s four women (Venetia Stevenson).  There’s a tense scene where the women are forced to “dance” with the outlaws, with the threat of rape hanging over them. 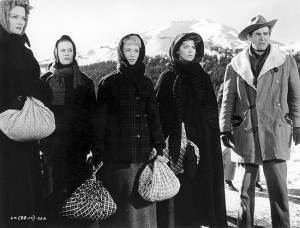 The gang is still pursued by cavalry and eventually forces Starrett to guide them out of Bitters through the mountains and snow.  He reluctantly does it to protect the women of people he doesn’t like, and that’s his redemption as a moral character, because he thinks he’ll probably die on the trip along with the outlaws.  In the process Bruhn dies of his wounds and the rest of the gang die one by one by various means on the grueling trek, even though Starrett doesn’t have a gun to shoot it out with them.  The only survivors are Starrett himself and Gene, whom Starrett gives a job on his ranch.  His role in keeping Gene from turning bad is also redeeming.

Echoes of Shane come from the name Starrett (also the name of the farming family that takes in Shane), the conflict between stockmen and farmers, townsman Elisha Cook, Jr. (a farmer in Shane), and a not entirely believable fight scene in which the aging, seemingly none-too-robust Starrett defeats the brutish Tex (Jack Lambert) from Bruhn’s gang.  Since Bruhn can’t allow that result to stand, two of his other men finish off Starrett, with this brutality seen only at a distance. 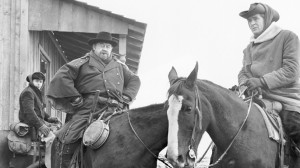 The leads Ryan and Ives are excellent and generally believable here; Starrett isn’t entirely good and Bruhn isn’t completely bad despite the scum he leads and his status as a military renegade.  There is a vague reference by Starrett to something Bruhn did during the Civil War, involving the Mormons in Utah.  For an unspoken and tenuous rapport between the bad guy and the good guy, compare this to Boetticher classics The Tall T and Seven Men from Now.  To the extent the cattlemen-farmer dispute is resolved, it seems to come out on the opposite side of Shane—i.e., Starrett mostly wins, but in this one he’s a cattleman.  He still doesn’t chase off the farmers, though. 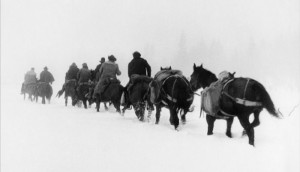 A stark and adult western with some noir flavor, among the best and last work by one-eyed journeyman director Andre de Toth (Ramrod, Man in the Saddle, The Indian Fighter).  Usually he worked with bigger stars (Joel McCrea, Randolph Scott, Kirk Douglas) and was not terribly imaginative.  The film has a good script by Philip Yordan.  In structure, the first 30 minutes is the set-up of the town, characters and local dispute; the second 30 minutes is the introduction of the gang and the contest of wills with Starrett and Bruhn; and the final 30 minutes is the grueling and fatal trip over the mountains.  This excellent western rises above the usual formulas, even though some of them seem in play here.  One of two westerns featuring the Nelson brothers in 1959; the other is Rio Bravo, with David’s brother Ricky in a prominent role.  For Burl Ives in a similar role, see him facing off against Charles Bickford in the epic The Big Country, probably his best-known western.

The excellent black-and-white cinematography is by Russell Harlan, who did Four Faces West, Red River, Ramrod, The Last Hunt (another wintry western), Rio Bravo and To Kill a Mockingbird.  Filmed in Mount Bachelor, Oregon.