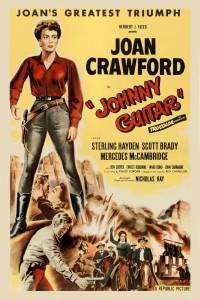 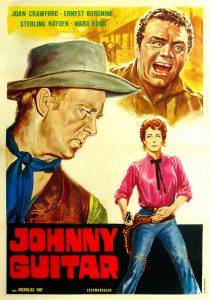 An unusual cult favorite with a large cast, noir influences and bright colors; similar to Fritz Lang’s Rancho Notorious in having a big female star from Hollywood’s golden age in the lead and in the melodramatic noir sensibility, among other things.  More obviously an artifact from the time it was made than any attempt to re-create the 19th century west for its story, it’s nevertheless an interesting artifact.

Former saloon girl Vienna (Joan Crawford in her hard-edged mode, a veteran of 30 years in the movies at this point) has finally built up her own saloon in the wilds of Arizona, although local ranchers (Ward Bond as baron John McIvers) and business people (Mercedes McCambridge as banker-rancher Emma Small) see her place as a haven for outlaws and rustlers.  The railroad is coming through, which they think will bring in hordes of new settlers to take their land, and Vienna stands to make a lot of money then. 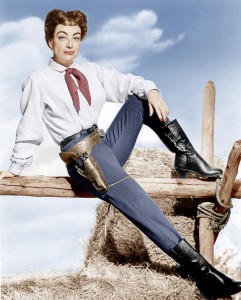 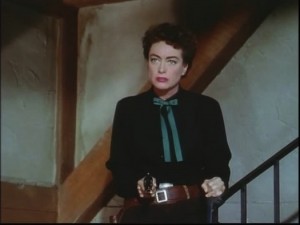 Things come to a head when the local stage is robbed, Emma’s brother is killed in the holdup, and a tall, guitar-playing blond guy from Albuquerque shows up, apparently responding to a call from Vienna.  This is the titular Johnny Guitar (Sterling Hayden), who initially spends his time fending off hostility both from McIvers and his group and from four apparent outlaw-miners, especially Bart Lonergan (Ernest Borgnine).  McIvers gives Vienna and the four 24 hours to clear out; Vienna makes it clear she’s not going.  Johnny Guitar fights with Bart, and wins.  As he’s leaving, young gunman Turkey Ralston (Ben Cooper) shows off and Johnny Guitar grabs a gun and bests him.  It turns out his real name is Johnny Logan, and he and Vienna have a lot of history, although they haven’t seen each other in five years.  She instructs him to leave his guns in his saddlebag. 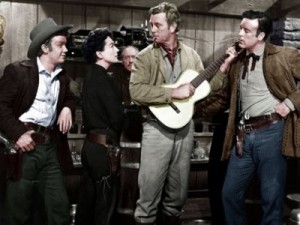 The four outlaw-miners include Bart, tubercular Corey (Royal Dano), Turkey and their leader the Dancin’ Kid (Scott Brady), a former paramour who now fancies Vienna more than she fancies him.  There are clearly a number of conflicts coming up.  The four aren’t yet real outlaws and didn’t rob the stage; they have a silver mine, but it’s played out now.  They decide that if they’re being chased out, they might as well rob the local bank (owned by Emma) before they go.

Vienna goes to the bank the next morning and withdraws all her money.  While she’s there, the four rob the bank, while Vienna tries unsuccessfully to talk them out of it.  McIver and Emma lead a vengeful posse in pursuit of the four, but Emma’s also convinced that Vienna had something to do with the robbery.  During the chase, the passes on the escape route are dynamited by railroad crews, and the four retreat to the Lair, their large house in a hidden, defensible position.  Turkey is hurt when his horse falls, and even more when his horse runs under a low-hanging branch and knocks him off. 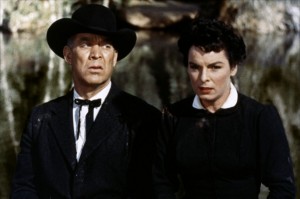 Having lost the four, the posse comes to Vienna’s, which is closed.  Vienna is playing the piano in a white dress; Johnny Guitar is out of sight.  The posse finds the wounded Turkey hidden under a table, and McIvers and Emma promise him he won’t hang if he gives up Vienna as an accomplice.  Turkey cracks (Vienna tells him to save himself, so she’s kind of acquiescing although not taking responsibility for the lie), and he does it.  The posse proceeds to hang them both from a bridge anyway despite their promises.  At the last second Johnny Guitar cuts Vienna down, and they make a break for the Lair.  Vienna’s saloon is in flames. 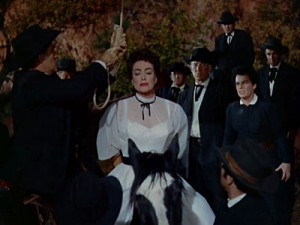 The posse follows Turkey’s horse to the entrance to the Lair, and Emma convinces lookout Bart to turn on his compatriots.  He knifes Corey and Johnny shoots him as he’s trying to shoot the Kid in the back.  Emma wounds Vienna and the posse kills the Kid but refuses to go farther with Vienna.  The furious and implacable Emma then pushes Vienna into a shootout, which Vienna wins, and the posse slowly leaves.  Presumably Vienna and Johnny get back together on a long-term basis.  Maybe Vienna rebuilds her hard-won saloon.

Joan Crawford dominates the film with her character Vienna, who’s always working out what her various relationships will be.  Sterling Hayden is slightly flaky as her gunless gunman in a supporting role, although the movie is named after him.  He apparently didn’t get along well with Crawford during the filming.  Ward Bond’s McIvers has some scruples, but not enough.  Emma is said to be a one-time rival of Vienna for the Kid’s affections, but McCambridge is an implacably anti-Vienna wild woman for most of the movie, somewhat over the top in her performance.  Crawford and McCambridge did not get along well, either, and maybe that fueled some of the hostility.  McCambridge later admitted that she was battling alcoholism at the time as well.  Frank Ferguson as Marshal Williams, the voice of reason and restraint in the mob, John Carradine as Vienna’s caretaker, and Royal Dano as the consumptive, book-reading Corey are all particularly good. 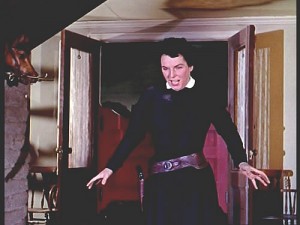 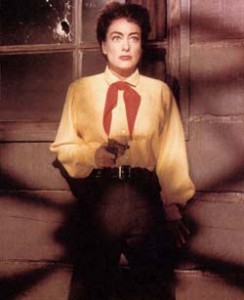 Director Nicholas Ray was known for his noir work (In a Lonely Place and others) in the early 1950s, and that sensibility is present in this melodrama, along with bright Technicolor touches and Crawford’s fierce eyebrows and crimson lipstick.  Some see this as an allegory for the political McCarthyism then dominating Congress, with the posse’s mob mentality and its leaders’ mistaken judgment and misplaced hostilities.  Taken as a whole, this is enjoyable to watch, if a bit overwrought.  It seems torn between its desire to have the Vienna character be a strong, self-sufficient woman (she wears pants for most of the film) and the occasional nod to 1950s social mores.  The all-female shootout between Vienna and Emma is a hallmark in the history of westerns.  Peggy Lee wrote and sings the title song.

[Other films with a 1940s-50s take on lynching include The Ox-Bow Incident (obviously), The Moonlighter, Three Hours to Kill and this.  The first two even have a black peripheral character present at the lynching to make the point that they really want us to be thinking about the problem of lynching of blacks in the south.]