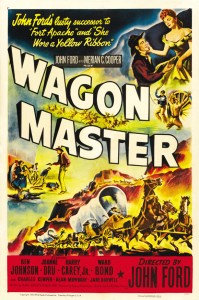 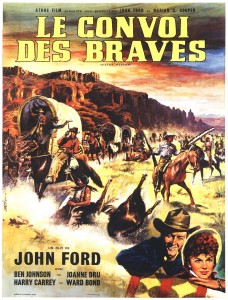 The title of this movie is sometimes written in one word, but in the movie titles it’s two.  Even lesser John Ford westerns, like this and 3 Godfathers, are better than average westerns.  This one, although well cast, is lacking in star power, with leads going to actors who usually played supporting roles in Ford’s westerns.  It is normally thought that the title refers to Ward Bond’s character, who went on to play the role of the wagon master in the television series Wagon Train before his death in 1960 at the age of 57.  But in the film Bond refers to Ben Johnson’s character as the wagon master.

Here Bond plays the role of Elder Wiggs, leader of a band of Mormons stranded in Crystal City, a town that doesn’t like them, as they try to make their way toward the San Juan River country, not too far from the Monument Valley and Moab locations where this was filmed.  Wiggs encounters the horse trading Blue brothers Travis (Johnson) and Sandy (Harry Carey, Jr.) who are familiar with the desolate country and hires them to guide the beleaguered Mormons. 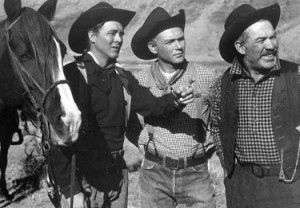 The first problem encountered is a medicine show (or “hoochie-coochie show,” as Wiggs refers to it) wagon, also kicked out of Crystal City and now stranded in the desert when its team of mules took off.  They’re consoling themselves with Dr. A. Locksley Hall’s elixir.  Hall (Alan Mowbray, who played the alcoholic Shakespearean actor in Ford’s My Darling Clementine) and his troupe reluctantly join the Mormons, who with equal reluctance are willing to give them replacement stock and take them as far as the cutoff to California.  Travis is drawn to Denver (a woman with a past, and named after a city, like Dallas in Stagecoach), the most attractive of Hall’s entourage.  (John Ford’s older brother Francis plays Mr. Peachtree, a minor member of the Hall group.)

The next problem is water, scarce in this dry part of the southwest.  Third, they encounter the Cleggs, a Deliverance-style band of related outlaws led by Uncle Shiloh Clegg (Charles Kemper), wounded in their most recent holdup—in Crystal City, as it happens.  He needs medical attention and decides not to leave the train after he gets it.  The Cleggs’ willingness to resort to violence and gunplay seems to put them in charge, to the dismay of the non-violent Mormons. 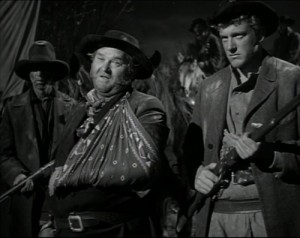 Next up, Indian trouble:  they encounter what seem to be hostile Navajos, played by the actual Navajos Ford normally used as Apaches or Comanches in his Monument Valley epics—except for Jim Thorpe, a Sac and Fox, in his last film appearance.  However, the Navajos actually seem inclined to trust Mormons more than normal white men, and the two groups bond over a campfire dance.  Reese Clegg attacks a Navajo woman, and in order to prevent bloodshed Wiggs orders him whipped.

A posse from Crystal City, where the Cleggs robbed the bank and which evicted both Hall’s wagon and the Mormons, catches up with them, seeking the Cleggs.  The Cleggs won’t let Hall’s wagon leave at the appointed place, and it looks like the Mormons are in for it from the Cleggs as well.  They come to a place where the Mormons have to dig a track for their wagons, including their unwieldy wagon with seed grain needed for their colony on the San Juan.  Still resentful at Reese’s whipping, Uncle Shiloh is on the verge of making Wiggs take the seed grain wagon on the track at full speed, insuring both Wiggs’ death and the destruction of the Mormons’ vital seed grain.  But Sandy, attracted to one of the Mormon girls (Kathleen O’Malley), is slipped a gun by her younger brother and starts shooting.  His brother Travis grabs a gun from a downed Clegg and together the two of them finish off the nasty Cleggs.  Wiggs’ comment to Travis:  “I thought you said you never got involved in gunplay.”  “I said, only shootin’ snakes.” 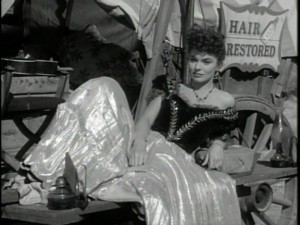 The medicine wagon and a prominent occupant:  Joanne Dru as Denver.

As far as we know, Sandy ends up with Prudence and Travis with Denver, although Denver is rather uncooperative through most of the movie, even when Travis tempts her with the prospect of joining him at a ranch in a special valley he knows (reminiscent of Ringo’s pitch to Dallas in Stagecoach).

Historically, the story seems grounded in the actual story of the Mormon pioneers’ grueling journey to the San Juan River country in far southeastern Utah.  A couple of times they sing “Come, Come Ye Saints,” the Mormon signature hymn, although there is also a rendition of the inevitable “Shall We Gather at the River.”  There’s some actual familiarity with Mormons behind all this, although there are stereotypical elements in the portrayal of the Mormons, too.

Bond and the young Johnson are excellent, as are Mowbray (with a whiff of W.C. Fields about him) and Kemper in lesser roles.  Ben Johnson, with his cowboy background, did his own stunts and was one of the best riders in westerns (along with perhaps Joel McCrea and Randolph Scott).  Carey is fine in a slighter role.  Joanne Dru (married to actor John Ireland at the time) here reminds one of her role in Red River, although that was directed by Howard Hawks; she’s good at playing an attractive semi-bad girl.  James Arness shows up in an early role as Floyd Clegg; Hank Worden is a mentally-impaired Clegg.  Charles Kemper is very good as the slimy Uncle Shiloh Clegg; he was killed in an automobile accident not too long after making the movie.  Jane Darwell is Sister Ledyard, who blows a horn to get attention or to get things moving. 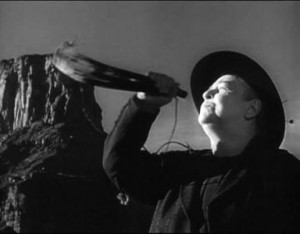 The movie is short, at less than 90 minutes, but well put together.  It is one of the better wagon train westerns; it would make a good double feature with Westward the Women, from about the same time.  There’s a fair amount of music from the Sons of the Pioneers, as in Ford’s She Wore a Yellow Ribbon and Rio Grande.  This was made between those two cavalry movies.  Ford was clearly enamored of the singing group during this period, although they’re an element that hasn’t aged particularly well for the tastes of modern audiences.  There’s a strong strain of Fordian nostalgia here, as in many of his westerns.  Ford is said to have claimed this was his favorite of his movies, and it’s quite good, if more modest than some others.  In black and white.