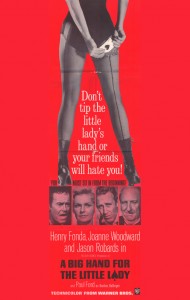 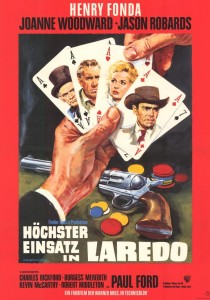 A drama-comedy whose comedic overtones get stronger toward the end, with a large and excellent cast.   It was the final film for both character actor Charles Bickford and Chester Conklin, a comedian from the silent era.

The annual big card game is taking place in the back room of a saloon-hotel in Black Rock, presumably in Texas.  The players are wealthy local cattle barons and merchants—Jason Robards, Kevin McCarthy, Charles Bickford, Robert Middleton and John Qualen.  Into town arrives a small family on their way to San Antonio:  A father, Meredith (Henry Fonda), a mother, Mary (Joanne Woodward), and a small son.  While they wait for a wagon wheel to be fixed, Meredith gravitates toward the poker game, which Mary insists he avoid.  Gradually he is drawn in by the lawyer Otto (Kevin McCarthy), converting their savings into poker chips. 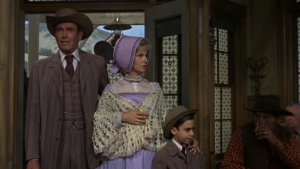 As the movie slowly builds, Meredith loses all of his savings until he gets what he excitedly claims is a big hand, but everybody else seems to feel the same about their own hands and he needs at least $500 more to stay in the game.  He sweats as the tension builds, he keels over of an apparent heart attack, and he is taken to the house of the doctor (Burgess Meredith).  Out of desperation, Mary takes over the hand, although she seems to have little idea of how to play it or even how to play poker, for that matter.  Eventually she goes across the street to the bank, trying to persuade the banker P.L. Barrington (Paul Ford) to lend her the $500 to stay in the game.  For collateral, she shows him the great hand.  He tosses them all out, but eventually joins them at the game and bankrolls her. 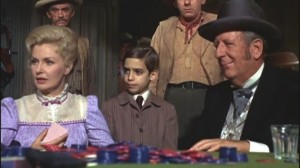 [Spoilers follow.]  Overcome by the tension, one by one the regulars fold, and Mary wins without ever having to show them her hand.  They are dazzled by her rectitude as a “good woman.”  Turns out it was all a con set up by Barrington, who was cheated by the same group 16 years previously.  Fonda emerges after the con as lively as ever, and the movie ends with Fonda, Mary (whose real name is Rosie) and several others in a new cutthroat card game.  The film builds slowly, but it works well as a character study with excellent actors.

The big card game is one of the long-time elements of western movies, featured most prominently in recent years in Maverick (1994).  One of the reasons it works well here is that we’re used to seeing Fonda as a lead in westerns, and when he keels over in the middle of the movie, it becomes much less predictable.  Joanne Woodward (Mrs. Paul Newman) was an excellent actress, winning an Oscar for Best Actress in 1957 for The Three Faces of Eve.  Of the remaining group of character actors assembled for this film, Jason Robards and Paul Ford are the strongest.