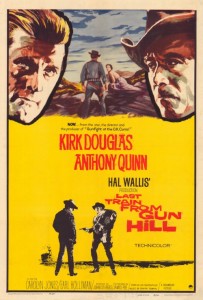 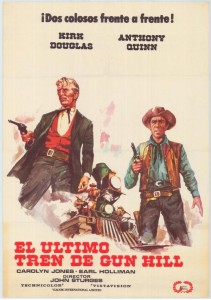 Matt Morgan (Kirk Douglas) is the town marshal in Pauley, married to a Cherokee woman.  His wife is raped and murdered by a couple of young men passing through, and Morgan recovers their horses.  He recognizes the saddle on one as belonging to an old friend in Gun Hill, cattle baron Craig Belden (Anthony Quinn).  It was his son Rick (Earl Holliman) who was using his saddle and committed the crime. 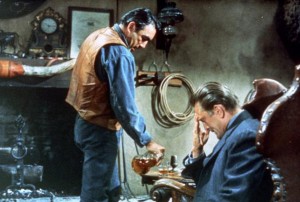 On his way to Gun Hill on the train, Morgan meets Linda (Carolyn Jones), a saloon girl and Belden mistress recently emerged from the hospital after a beating from Belden pere and now returning to Gun Hill.  Gun Hill is a corrupt place, completely controlled by Belden.  Morgan confronts Belden, who denies any participation by his son in the death of Morgan’s wife.  But Morgan captures Rick and holes up in the Harper House hotel, where he is besieged by Beldon’s men.

With some help from Linda, Morgan gets out to try to make it with Rick to the last train out of Gun Hill at 9:20 p.m.  At the last minute, Rick’s partner in crime, Lee Smithers (Brian Hutton), tries to shoot it out with Morgan and kills Rick instead.  Morgan gets Smithers and now has nobody to haul back to Pauley.  He and Belden shoot it out, at Belden’s insistence. 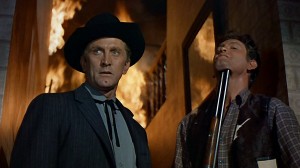 The bones of the plot may sound fairly pedestrian, but it’s better than that.  It’s a well-put-together John Sturges western from the end of his early period.  Douglas gives a good performance; he’s obviously in good shape from the way he’s able to carry a supposedly unconscious Earl Holliman (not a small person) over his shoulder for an extended period on screen without showing any strain or becoming lopsided.  His anguish at the death of his wife is believable, as is his determination to uphold the law and not take it into his own hands—one of the two central conflicts of the movie.  Anthony Quinn is very good, too, in a character reminiscent of the one he plays in Warlock.  Jones and Holliman are good in different ways, in limited parts.  Reminiscent of the plot in 3:10 to Yuma in terms of trying to catch a train against armed resistance.  In color.  Music by Dimitri Tiomkin, cinematography by Charles Lang, Jr.  The screenwriter was said to have been the blacklisted Dalton Trumbo. 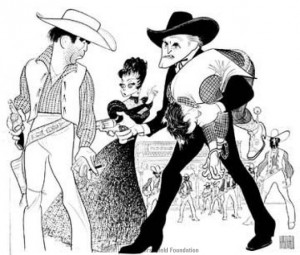