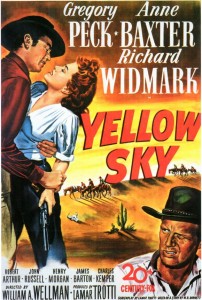 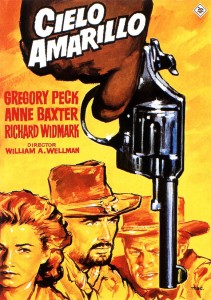 Talky, noir-ish western with a small cast.  James “Stretch” Dawson (Gregory Peck) is the leader and perhaps the toughest of a gang of seven outlaws.  In 1867, the gang robs a bank in northern Arizona or New Mexico and is pursued by a posse into the desert.  One of them is killed, and they set out across the waterless waste.  (An outlaw gang pursued by a posse is a traditional set-up for a desert/isolation story, used, for example, in 3 Godfathers, Quantez and Purgatory, among a number of others.)  The survivors include Dude (Richard Widmark), a gambler with a gold fixation; Lengthy (John Russell), who likes both gold and women; Bull Run (Robert Arthur), a young man; Walrus (Charles Kemper), a hefty guy with a drinking problem: and Half Pint (Harry Morgan), the least developed character of the six. 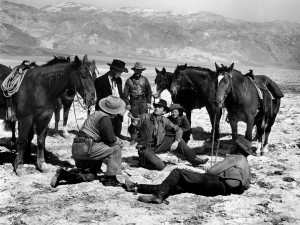 On their last legs, they arrive at Yellow Sky, a ghost town, where they find water, an old prospector (James Barton) and his tomboyish granddaughter Mike (real name:  Constance Mae, played by Anne Baxter).  Trouble starts almost immediately, with various lusts coming into play.  And then Dude discovers that the prospector and Mike have gold.  With numbers on their side, Stretch makes a deal to split the gold 50-50.  Lengthy and Stretch are developing interests in Mike, and some backstory develops with Stretch.  It turns out he’s a Yankee veteran of the war on the border fighting Quantrill, and his intentions toward Mike may be more or less honorable, in contrast to Lengthy’s. 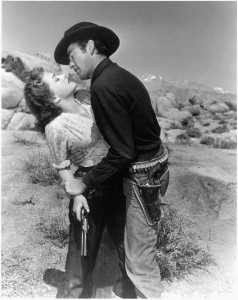 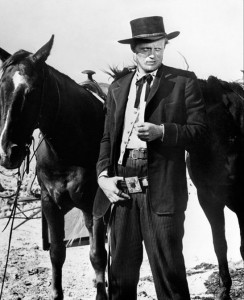 As matters develop, eventually the gang with Dude as the dominant personality rejects Stretch’s leadership, and Stretch joins the prospector and Mike as they shoot it out.  Bull Run is killed, and Dude turns on Lengthy.  Stretch gets Walrus and Half Pint to join him, and in the end has to shoot it out with Dude and Lengthy in an old saloon.  None of the saloon shootout is shown—just the bodies on the floor afterward.  Stretch returns the stolen bank money, presumably to settle down to a permanent relationship with Mike.  This is one of the first westerns where an outlaw gets to return his ill-gotten gains and walk away (unlike, say, Joel McCrea in Four Faces West, Fred MacMurray in The Moonlighter or John Wayne in 3 Godfathers, all of whom have to serve some jail time as part of their rehabilitiation). 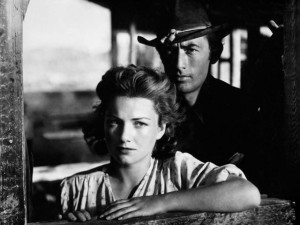 The story relies on believing Peck’s basic decency, even when he seems to be a bad guy.  Peck was initially reluctant to play an outlaw, feeling that he was miscast.  Hank Worden and Jay Silverheels have uncredited tiny parts.  Watchable but a bit talky, with an excellent cast.  This may have been one of John Russell’s best roles.  Charles Kemper is largely forgotten now, but in the late 1940s and very early 1950s he was an excellent character actor in such westerns as this, Wagon Master and Stars in My Crown before his early death in an automobile accident.  Harry Morgan shows up in a surprising number of good westerns, from The Ox-Bow Incident to this to High Noon to Support Your Local Sheriff, to mention just a few.

This was an early entry in the series of “adult” or psychological westerns of the 1950s.  The setup has some similarities with The Law and Jake Wade, made a few years later.  Some say this is an adaptation of Shakespeare’s The Tempest, but if so it’s not a very close one.  Director William Wellman said in the book “The Men Who Made the Movies” that he had no idea of the connection.  Wellman also made such excellent westerns as The Ox-Bow Incident and Westward the Women.  Produced by Lamar Trotti, who wrote The Ox-Bow Incident, among many other films.  Shot in Death Valley and the Alabama Hills in Owens Valley in black and white.  Music by Alfred Newman.