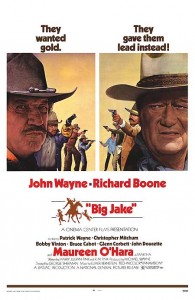 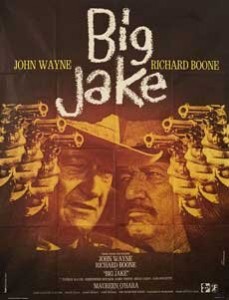 A better-than-average John Wayne western from his late period (post-True Grit), maybe the third best after The Cowboys and The Shootist.  Wayne plays Jacob McCandles, long estranged from his family and thought dead by many.  At the start of the movie in 1909, his family is attacked by evildoers led by John Fain (Richard Boone, in one of his better villain performances).  They shoot his oldest son Bobby (played by Bobby Vinton) and kidnap his grandson Little Jake (Ethan Wayne), demanding $1 million in ransom.

Big Jake is called back by his wife (Maureen O’Hara, in the last of their five movies together) and undertakes to lead a group into Mexico to deliver the money, aided by sons James (Patrick Wayne) and Michael (Christopher Mitchum), who are fans of new technology, longtime Indian scout Sam Sharpnose (Bruce Cabot) and Dog.  There is friction, if not outright hostility, between Jake and the sons, and the writing for and acting of the sons is probably the weakest element of the movie.  Others hear about the money and would like to steal it.  There’s a good shootout scene when the ransom is delivered, with excellent dialogue between Big Jake and John Fain, although some criticize the film as too violent and bloody.  The juxtaposition of old West ways and new technology with its limitations is effective. 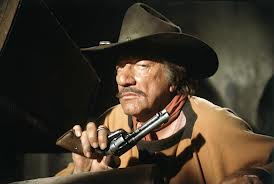 These westerns in which John Wayne and Maureen O’Hara play an estranged married couple (Rio Grande, McClintock!) always seem to make the resolution of the estrangement a lot easier than it would be in any real relationship.  It isn’t clear why the Boone character wears an orange serape the whole movie.  Did they think we wouldn’t recognize him without it?  Did they suppose it made him look larger?  Is he related to Clint Eastwood’s Man With No Name?  The narration at the start, setting the late-west, early modern nature of 1909, is unnecessary and a bit clunky.  In general, the film isn’t stitched together all that well and has too close an eye on what seems to have sold in previous Wayne movies, but it’s nevertheless quite watchable.

Director George Sherman was an old timer, and this was his last significant film.  It is said that he was in bad health during the filming and that Wayne took over for him frequently.  There are some instances of less-than-great camera angles during fights; in general the directing isn’t remarkable.  The writing is by the same husband-wife team that wrote Dirty Harry about the same time.  Note some of the trademarks:  the recurring “I thought you were dead,” usually answered by “Not hardly.” And the lines repeated between Boone and Wayne are effective.  Good score by Elmer Bernstein.  Dog seems very like the feral character Sam from Hondo, made 20 years earlier.  This was also made by Batjac, Wayne’s production company.