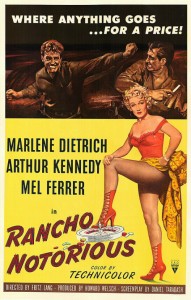 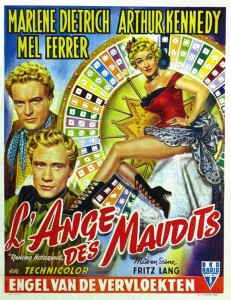 Altar Keane (Marlene Dietrich) is a former saloon girl who runs a horse ranch in the southwest where outlaws can take refuge while on the run.  She gets 10% of their ill-gotten loot as a fee.  (Among the outlaws staying there are George Reeves, Jack Elam and the blacklisted Lloyd Gough.)  The ranch is called Chuck-a-Luck because she won the money to start it at that roulette-like game.  Her paramour is gunfighter and bank robber Frenchy Fairmont (Mel Ferrer).

When Kinch (Gough) robs an assay office in Whitmore, Wyoming, he rapes and kills Beth Forbes (Gloria Henry), fiancée of rancher Vern Haskell (Arthur Kennedy) and kills his own partner Whitey (who wears an egregious wig).  Haskell laboriously becomes good with a gun and tries to track down the rapist-robber over the next year.  He keeps hearing stories about Altar Keane and a place called Chuck-a-Luck.  In one town he helps Frenchy break out of jail, and Frenchy takes him to Altar Keane and her ranch, where he becomes another of the guys on the run there.  He sees Keane wearing a brooch he’d given his fiancée and tries to find out where she got it, feigning an attraction to Keane. 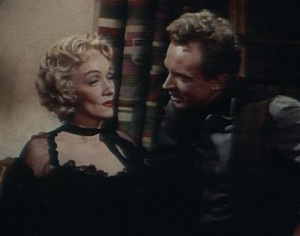 The outlaws get shot up in a bank holdup when Kinch prematurely takes a shot at Haskell.  Haskell turns Kinch over to the local sheriff, and the rest of the gang (except for Frenchy) turns on Keane for telling Haskell about Kinch.  In the ensuing shootout, Haskell kills Kinch, but Keane takes a bullet for Frenchy and dies.  Haskell and Frenchy apparently ride off together, a la the ending of Casablanca. 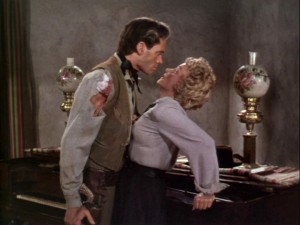 Haskell is a typical Lang hero with a fixation on vengeance after a terrible wrong.  But the Van Heflin-esque Kennedy is not particularly memorable in the lead role.  There a faintly amoral air to the movie, and a slightly European feel from the cosmopolitan Dietrich and Ferrer and Austrian director Fritz Lang.  Lang is not particularly interested in gunplay or action, except for the final shootout.  He tries to persuade us that Dietrich is fascinating; her character is the subject of most of the movie.  She inevitably reminds us of her role in Destry Rides Again 13 years earlier (where she played a character named Frenchy), and was said to have hated working with the Prussian-minded Lang.  The movie has a truly terrible theme song, which intrudes at several points throughout the movie, and there are several obviously painted vistas in a curiously lurid Technicolor. 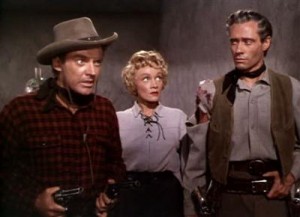 Lang’s most famous films are M and Metropolis, made when he was still in Europe, and this was the last of three westerns he made (along with The Return of Frank James and Western Union).  In the U.S., he mostly made films noir and suspense/thrillers.  This is an interesting, not-completely-effective, noir-ish, almost campy artifact, reminiscent in some ways of Nicholas Ray’s Johnny Guitar from the same era.