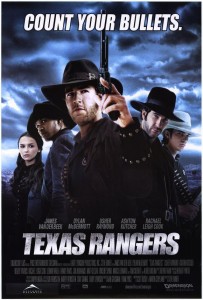 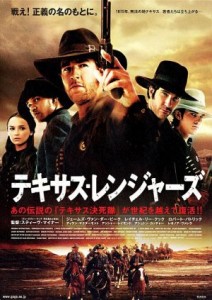 With a fairly good (youth-oriented) cast and excellent production values, this film suffers from poor direction and inadequate writing.  It’s only 90 minutes long, and there’s not much flow to the story and not nearly enough character development.

It’s 1875 in southern Texas.  Consumptive Civil War veteran and former preacher Leander McNelly (Dylan McDermott, playing an actual historical Ranger captain) is somewhat theatrically digging his own grave when he is approached to form a new company of Texas Rangers to fight the huge outlaw gangs along the Rio Grande and the Nueces Strip, especially the ruthless semi-army led by John King Fisher (Alfred Molina).  Captain McNelly has lost his own family to these brigands, and with a couple of experienced and faithful sergeants (Robert Patrick, Randy Travis) begins recruitment of a company of rangers in Brownsville.  Signing up are a number of green youngsters, including educated Philadelphian Lincoln Rogers Dunnison (James Van Der Beek) and rough Missourian George Durham (Ashton Kutcher).  Both of their families have been slaughtered by Fisher’s outlaws. 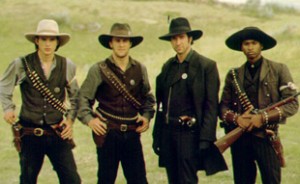 This is intended to be a story of Dunnison becoming a man, but we don’t see enough of that story for it to be believable.  He keeps a record of the expedition for McNelly and gets to know him.  McNelly is as ruthless in his own way as Fisher, although he’s not gratuitously cruel.  McNelly leads his company of 30 rangers in an attack on Fisher and is defeated by much larger numbers.  Twelve of his rangers are killed, and they retreat to the large, prosperous ranch owned by Richard Dukes (Tom Skerritt) to lick their wounds and recruit more rangers.  At the Dukes Ranch, Dunnison and Durham both are attracted to Dukes’ daughter Caroline (Rachael Leigh Cook), who inexplicably likes the feckless Durham more.  Rescued female captive Perdita (Leonor Varela) says she overheard Fisher planning to attack the Logan Ranch, and the barely-recovered rangers head in that direction, only to realize that they have been misled and the real attack is on the Dukes Ranch.

They double back but arrive at the devastated ranch too late and can only follow Fisher’s men with their stolen cattle to the Rio Grande.  The rangers try to trade Perdita for the captive Dukes, but Fisher hangs him anyway.  McNelly and his men follow Fisher’s outlaws across the Rio Grande to their Mexican stronghold and attack them there.  McNelly is badly wounded, and Dunnison is saved by Perdita and kills Fisher.  Back at the Dukes Ranch, the dying McNelly confers leadership of the ranger company on the young Dunnison, and they ride out at the end of the movie, presumably to continue cleaning out bandits and outlaws from the Rio Grande area. 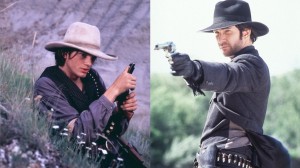 For the most part, the movie is well enough cast.  Dylan McDermott is appropriately implacable and hard as McNelly; Alfred Molina is even more despicable than you’d expect a bandit chieftain to be.  Van Der Beek, formerly known for the youth-oriented television series Dawson’s Creek, is fine as the city-educated Dunnison.  Other young elements of the cast are obviously influenced by the success of Young Guns some years earlier.  Ashton Kutcher is just plain bad as George Durham, and Rachael Leigh Cook might have been all right if she’d been given a real role and any motivation or development.  Instead, she joins a long line of extraneous and underused females in western movies.  Usher Raymond is good as a young black scout with equality issues.  Randy Travis isn’t bad, mostly because he doesn’t have to act much and has very few lines.  James Coburn provides uncredited voice-over narration at the beginning of the film.

The use of white armbands by McNelly’s men during attacks was historical.  There are some historical inaccuracies as well, including the fact that Fisher rarely raided in the U.S and wasn’t killed until 1884 (with his friend gunman Ben Thompson).  After his involvement with McNelly, Fisher became the sheriff of Uvalde County.  More appropriate antagonists would have been the Mexican bandit chieftains Juan Cortina and Juan Salina.  The weapons and use of dynamite are also inaccurate.  But for this kind of western, one expects more theatricality than accuracy.  Photographs of real Texas rangers during the 1870s and 1880s show more sombrero-looking hats than those used in this movie.  This film was apparently shot in Alberta, which, while beautiful, doesn’t look much like southern Texas. 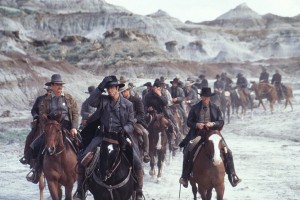 The bones of a good movie are here, but Miner and the various producers didn’t make one.  They didn’t trust their writers enough to develop the various characters, and the result is a string of episodes where motivation and change are simply thrown in without being developed so we can care.  Steve Miner, the director, is best known for such fare as Halloween and Friday the Thirteenth movies, and although those make money, they obviously didn’t prepare him for films that require more in the way of character and actual story.  The Weinstein brothers are listed as executive producers; they know how to make movies, but they didn’t spend enough time or effort on this one.  Or maybe they interfered too much.  Compare it with American Outlaws, another attempt by some of the same people to use a youth-oriented cast to tell a quasi-historical western story.  Both have a strongly anachronistic feel. 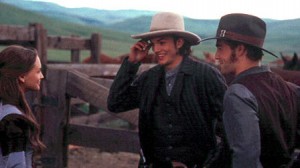