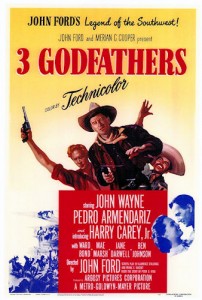 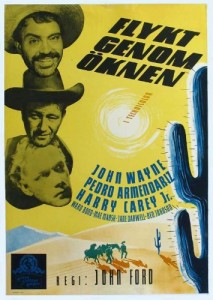 If one were asked to name a Christmas western, 3 Godfathers would be the first that came to mind.  One might also add the made-for-television Jericho.  The official title of this version appears to have the numeral 3, instead of spelling out Three Godfathers.

This was at least the sixth remake of this story, including two previous silent versions by John Ford and a 1929 talkie directed by William Wyler.  Audiences at the time this was released probably thought it was better than current audiences would.  In fact, this is probably among the least-watched of Ford’s post-WW II work.  It seems old-fashioned, and it was not the first time that Ford had told this story.  It was made during the last period when not only was the reformed-badman theme in vogue but so was a kind of overtly sentimental religious outlook that was part of society’s general consensus.  That consensus has since disappeared.  For purposes of comparison, look at Wayne’s Angel and the Badman and Joel McCrea in Four Faces West, both from about the same time.  If we can’t exactly share those sentiments in our more cynical time, we shouldn’t lose the ability to appreciate the stories, since they were part of life in the American west, too.

Bob Hightower (John Wayne), Pedro Roca Fuerte (Pedro Armendariz) and William Kearney, the Abilene Kid (Harry Carey, Jr., “introduced” in a story his father had starred in twice) ride into Welcome, Arizona, formerly known as Tarantula, planning to rob the local bank.  They meet Perley “Buck” Sweet (Ward Bond), the canny local sheriff, and his wife (Mae Marsh).  They hit the bank and as they are making their escape out of town, Sweet wings the Kid and puts a bullet hole in the bandits’ water bag.  They take out into the desert, heading for Mojave Tanks—three men on two horses. 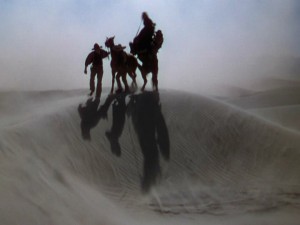 At Mojave Tanks, they find Sweet has used the train to get two men there already.  They move on to Terrapin Tanks, only to find that a tenderfoot has ruined the granite tanks with dynamite, seemingly out of greed.  They lose their two remaining horses and are now afoot in the desert.  They find the tenderfoot’s wife—Perley Sweet’s sister (Mildred Natwick)–in her Conestoga wagon, out of water and about to give birth.  Her husband has disappeared four days previously, chasing their own horses.  Pedro, having had an Indian wife, is deemed the one best qualified to help with the birth, and a baby boy is born.  Before she dies, the new mother makes the three promise to be godfathers to the newborn and to save him from the desert.  Also being reborn in this grueling process is the faith of Robert Marmaduke Hightower (Wayne), who starts off as a nonbeliever. 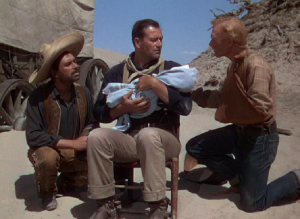 The three stagger out toward New Jerusalem with the baby, guided by a scripture on the Nativity and saving their water for the wounded Kid and for the baby.  First the Kid dies, and Pedro takes the baby.  He falls down a bank and breaks his leg.  Realizing he can’t go on, he sends Hightower with the water over the mountain toward New Jerusalem.  Hightower can’t make it, but is urged along by the shades of his companions and the promise made to a dying woman.  As directed by the Bible, he finds a donkey and its colt—enough to stagger into New Jerusalem’s saloon with the baby. 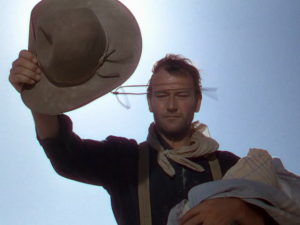 Buck Sweet finds Hightower there just as the cowboy collapses.  When he revives (in jail), he’s willing for Buck and his wife (Mae Marsh) to take over custody of the child temporarily while he’s in jail.  The judge delivers a sentence in a barroom, after Hightower reaffirms his intention to keep the promise he made to the baby’s mother.  Because of his personal reformation and the care he has taken of the child, he gets the minimum, only a year and a day at Yuma.  Even the banker’s daughter seems taken with Hightower and promises to write to him. 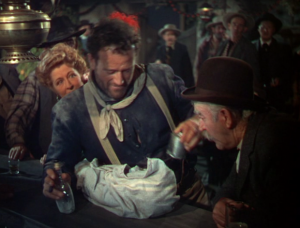 Just ahead of the posse, Hightower delivers the baby to a bar in New Jerusalem, causing them to burst into the song “Silent Night.”  He collapses.

Interesting to note that the charismatic Pedro Armendariz had equal billing with Wayne in this film.  He’s very good as an actor, and as a rider—watch him handle the horse as the three make their getaway in Welcome.  However, Armendariz had blowups with Ford during filming and never worked with him again.  There are many Ford regulars in this cast:  Ward Bond, Mildred Natwick (who seems older than the 28 to 30 she’s supposed to be), Jane Darwell, Hank Worden, Harry Carey, Jr., and an early role for Ben Johnson.  They do fine, although the story does not move quickly during its period in the desert. It was the last film for Guy Kibbee, who plays the judge who sentences Hightower.  Mae Marsh had started in movies in 1910 at the age of 15, appearing in such classics as Birth of a Nation and Intolerance for D.W. Griffith.  By 1940 she was a favorite character actress of John Ford, appearing in The Grapes of Wrath (1940), How Green Was My Valley (1941), 3 Godfathers (1948), and The Searchers (1956).

The movie was a bit old-fashioned even when it was made, and it seems a little more so now.  It shows more than usual of Ford’s sentimental streak, and the Christmas overtones are certainly leaned on.  About the same time this was released (1948), Wayne was starting some of his strongest work:  Fort Apache (with Ford), Red River (with Howard Hawks) and The Wake of the Red Witch.  The next year would see She Wore a Yellow Ribbon (with Ford) and The Sands of Iwo Jima, which garnered Wayne his first Academy Award nomination.  Although not as strong as these other films, this doesn’t need to be ashamed in their company, either.  It’s a kind of a tale, with a sort of sentimental Christianity about it, that has gone out of fashion now, but it’s worth watching.  It features the singing of Ford’s usual “Shall We Gather at the River,” and also “Bringing in the Sheaves.”  Filmed at Lone Pine, in color.  The cinematographer was Winton Hoch, who won an Oscar for She Wore a Yellow Ribbon the next year and later shot The Searchers with Ford. 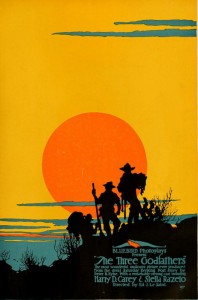 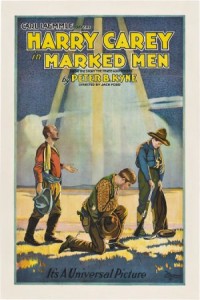 Posters for the 1916 and 1919 versions of the story, both starring Harry Carey.

Note:  In the original story by Peter B. Kyne, the Hightower character does not survive, unlike the quasi-happy ending in this version.  The Kyne novel, published in 1913, was first made into a movie in 1916, starring Harry Carey as Bob Sangster (the John Wayne role here).  Carey, a mentor to a young John Ford, had died in 1947, the year before this movie was released.  Ford’s first version (and the second on film) was a silent movie Marked Men, in 1919, also starring Harry Carey.  His second (the third movie of this story) was called Action, only two years later in 1921, with Hoot Gibson.  Action is now considered to be lost, as are 60 of Ford’s 70 silent films.  William Wyler did a version in 1929 as Hell’s Heroes, starring Charles Bickford and Raymond Hatton.  A fifth version, Three Godfathers in 1936 by Richard Boleslawski, starred Chester Morris, Lewis Stone and Walter Brennan.  This sixth version followed in 1948, and is by far the best-known now.  The seventh and last version (so far) to be put on film was The Godchild in 1974, with Jack Palance, Jack Warden and Keith Carradine as escaped Union POWs during the Civil War.  Some of the themes (three unsuitable stand-ins for parents under desperate circumstances) were used in Japanese Studio Ghibli’s 2002 anime Tokyo Godfathers, but that really isn’t a remake.