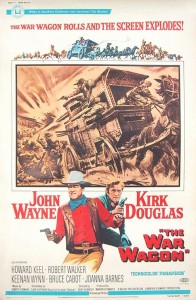 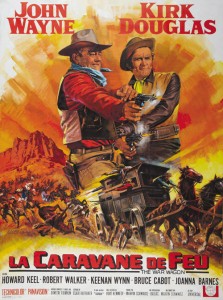 Fairly good late period John Wayne, better written by Clair Huffaker than most of Wayne’s regular fare.  This is an assembling-the-team-and-pulling-the-caper western (like The Badlanders and The Train Robbers) by Wayne’s Batjac production company.  It also represents Burt Kennedy’s move from writing (the best of the Budd Boetticher-Randolph Scott films) and television directing to directing movies.  This was about as good as director Kennedy would get, though, except for his Support Your Local … pair starting the following year.

Honest rancher Taw Jackson (Wayne) gets out of prison after three years and returns on parole to Emmett, New Mexico, about 43 ½ miles from El Paso.  He lost his ranch and was framed for some unspecified crime by Frank Pierce (Bruce Cabot), owner of the Pierce Mining Company, when gold was found on the ranch.  The wagon of the title is Pierce’s armored stagecoach, used for delivering gold to the railroad, accompanied by more than thirty armed guards on horses.  The sheriff is clearly in Pierce’s pocket.

Jackson aims to get back some of his gold when an unusually large shipment ($500,000) is due to move.  He first recruits amoral old enemy Lomax (Kirk Douglas), gunman, gambler, womanizer, bon vivant and, not incidentally, safecracker.  He had made arrangements in prison with Billy Hyatt (young Robert Walker, son of Robert Walker and Jennifer Jones), alcoholic but good with explosives, and with dishonest Wes Fletcher (Keenan Wynn), who hauls freight for Pierce and provides both information and a means of transporting the loot (in barrels of flour).  The final member of the team is Levi Walking Bear (a ludicrously cast Howard Keel, but he’s mostly comic relief), for his connections with the Kiowas led by Wild Horse, who is to provide a diversion for the wagon’s outriders during the robbery.

Pierce outfits the wagon with a gatling gun just before the run, but with a few ups and downs things work out mainly as planned.  When the outriders are distracted by the Kiowas, Billy uses nitroglycerin to blow up a bridge and separate them from the wagon.  Lomax and Walking Bear set a trap to remove the wagon’s driver.  Pierce, inside the wagon, has a falling out with two of his henchmen at a critical moment, and they shoot him as he shoots them.  Fletcher shows up at the appointed place with his young blond wife (bought from her parents and played by Valora Noland), and the team puts the gold loose in the flour barrels.  Wild Horse, however, tries to double-cross them until distracted, and perhaps blown up, by nitroglycerin.  The Indians shoot Fletcher and the flour/gold wagon bolts driverless.  The barrels roll out toward the starving Kiowa women and old people, and the gang appears to have lost its loot—except that Jackson finds a few bags that Fletcher had surreptitiously stolen.  Presumably, Jackson gets his ranch back, and Billy gets Fletcher’s young, blond wife.

Kirk Douglas had been a significant movie star for 20 years when this was made, but a point is made of his athleticism, such as frequently leaping on to horses without using the stirrups.  He wears a hat less than most actors in westerns, as in The Last Sunset.  Douglas is dressed in very tight-fitting clothes, including a suede tunic-vest that must have been difficult to get into, matching suede boots, black form-fitting stretch pants and black gloves with a large ring on the outside of one finger.  The Douglas-Wayne interplay is very effective; they made three films together in as many years.  According to the production notes on the 2003 DVD release, Keenan Wynn’s battered hat that he wears in the picture was Leslie Howard’s Confederate cavalry hat from Gone With the Wind which Wynn purloined from MGM.  Wynn first wore the hat in a 1942 MGM screen test and “wore it in every picture he made.”  Although Wynn plays a crazy/dishonest old man, he was in fact nine years younger than Wayne.  According to Wayne, the (gratuitous) fight in the saloon was his 500th on-screen fight.

There are a number of the Wayne regulars along for the ride.  Harry Carey, Jr., Bruce Cabot, Sheb Wooley, Chuck Roberson.  Bruce Dern, a slimy Pierce henchman who gets killed early in the movie, would be the first to kill John Wayne in a western a few years later in The Cowboys.  The gold dust looks rather obviously like iron pyrite.

To see John Wayne as an outlaw again, look at 3 Godfathers, The Angel and the Badman, The Searchers, and The Train Robbers.  Maybe The Sons of Katie Elder.  He’s showing his age here; he’d already lost a lung to cancer, and it’s not terribly believable when he and Douglas seem to leap from the crashing war wagon.  But it’s an enjoyable and watchable movie anyway, if not among his best—better and more coherent than the previous year’s El Dorado, even though the estimable Howard Hawks directed that one. 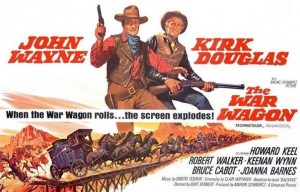 Filmed in color by William Clothier in Durango, Mexico.  Music by Dimitri Tiomkin, but it’s not one of his more memorable scores.  Theme song sung by Ed Ames.

This was the first of three John Wayne movies in which one of his old acting pals plays a dubious Indian:  Howard Keel here, Neville Brand in Cahill U.S. Marshal, and Bruce Cabot in Big Jake.  Young Robert Walker didn’t have much of a movie career, but you can catch him in another western:  Young Billy Young, with Robert Mitchum, also directed by Burt Young.