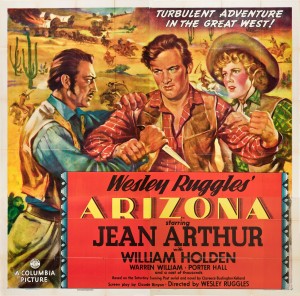 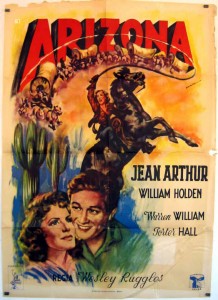 Set in Tucson before and during the Civil War.  Phoebe Titus (Jean Arthur) is the quintessential strong western woman, running a pie business, starting freighting operations and building her dream ranch.  The movie revolves around her.  Pete Muncie (William Holden) is originally passing through on his way to California, but they catch each other’s eye.  When this movie was released, in a reversal of the usual pattern Jean Arthur was 40 and Holden only 22, but the difference isn’t very visible on screen.  This and Texas are among the earliest films for both Holden and Edgar Buchanan; this was Holden’s first western and first starring role. 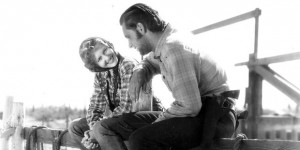 In Tucson the local bad guys are led by saloon owner Lazarus Ward (Porter Hall), until Ward is taken over by new arrival Jefferson Carteret (Warren William).  They sell guns to the Indians (Apaches) and organize other forms of theft and evildoing.  Muncie takes his time getting ready to settle down, and Titus’ freighting business allows her to build up the money she needs for her ranch.  The Ward-Carteret gang steals her money, and she borrows it back from Carteret.  Muncie takes it to Nebraska to buy a herd.  On his return, he is attacked by Apaches paid by Carteret, who shoots his own partner Ward in the back.  After his wedding the next day, Muncie shoots it out with Carteret, offscreen (as in Stagecoach).  The focus remains on the new bride Phoebe as she stands in the local store ordering supplies for her ranch, hearing gunshots outside and wondering whether she’s already a widow.  The camera stays on her face, and there is real acting going on there. 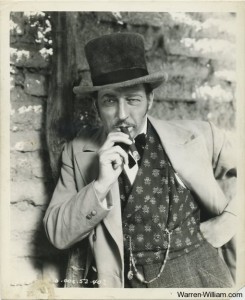 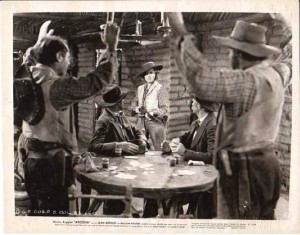 Arthur anachronistically wears pants for almost all of the movie, and the plot is kind of uneven, but it’s watchable and Arthur in particular is good.  Edgar Buchanan, a former dentist in real life, plays the first of his reprobate judge roles, in which he would specialize for the rest of his career.  Long for a western in 1940, at just over two hours, and some feel it has pacing problems.  In black and white.

Jean Arthur didn’t make a lot of westerns, but she’s in some good ones.  Look for her as Calamity Jane in The Plainsman, for example, with Gary Cooper.  Her final movie, for which she was enticed out of retirement in her 50s, was Shane.

One of the lasting legacies of this film was the creation of the set, the Old Tucson Studios, used as a setting for western towns in hundreds of movies and television shows since, including, for example, Rio Bravo and Tombstone.