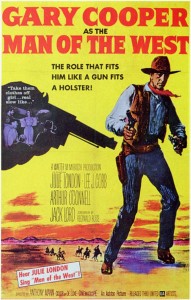 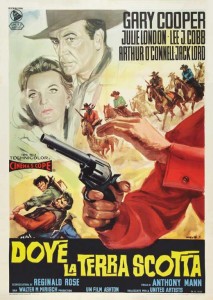 Link Jones (Gary Cooper) to his cousin Claude (John Dehner):  “Don’t you talk anymore, Claude?  We used to talk, you and me, when we were kids.  What happened?  Things have kind of gone to hell, haven’t they?  And you’re still at it – stealing and killing and running.”

This psychological western has a pretty meaningless generic title, and it’s not as good a film as the westerns director Mann made with James Stewart.  Except for the 1960 remake of Cimarron, this was Anthony Mann’s last western and the third of his post-James Stewart period (after The Last Frontier and The Tin Star and before Cimarron). 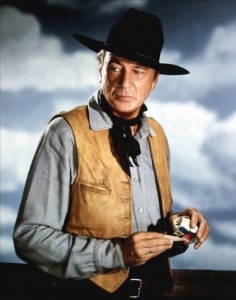 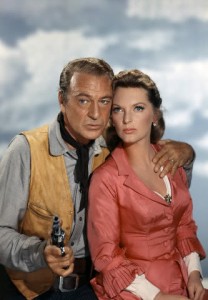 Publicity stills of Gary Cooper and Julie London from Man of the West.

Gary Cooper was always watchable in a western, but he seems too old for the role he’s playing in this one.  He’s Link Jones, a reformed outlaw in west Texas in 1874 on his way to Fort Worth to hire a schoolmarm for the new school in his town.  An unsuccessful train robbery leaves Jones, saloon singer Billie Ellis (Julie London) and talkative gambler Sam Beasley (Arthur O’Connell) stranded a hundred miles from anywhere.  Jones used to know the territory, and they hike to an apparently abandoned ranch.  It’s not abandoned but is being used for the moment by the Dock Tobin gang with which Jones used to run and which pulled the botched train robbery.

In fact, Tobin (Lee J. Cobb) is Jones’s uncle, and the two most effective members of the gang are Jones’s cousins Coaley (Jack Lord) and Claude (John Dehner).  The others are the mute Trout (Royal Dano) and Ponch (Robert Wilke). 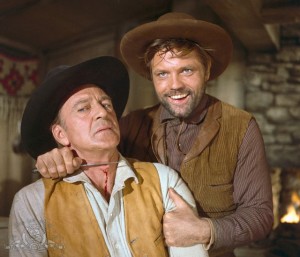 Jones, who’d abandoned the gang a decade earlier, makes like he intends to rejoin them and tells them that Ellis is his woman (although he actually has a wife and two kids back home in Good Hope).  Tobin wants Jones back, but he’s just barely in control of this gang of brutal scumbags, and the rest of them aren’t at all sure of Jones.  The two most disturbing scenes are when Coaley makes Ellis strip while holding a knife at Jones’ neck, and later when Jones beats the crap out of Coaley and rips Coaley’s clothes off in retaliation.  Tobin seems to see Link as a more capable successor than either of his own sons, and they both resent it and don’t trust him as much as Tobin is inclined to.

Jones joins the gang for a bank robbery in what turns out to be a ghost town now, and he kills Trout, Ponch and Claude, one by one.  Returning to the wagons, he finds that Ellis has apparently been raped by Dock, and Jones and Dock have it out.  At the end, Link and Ellis set off for civilization, Link with his town’s money back and the gang all dead (and Link’s unsavory past with them), and Ellis in love with Link but knowing there’s no future in it.

Link (Gary Cooper) and Dock (Lee J. Cobb) talk about the past.

Some would draw parallels between Link Jones and Clint Eastwood’s character William Munny in Unforgiven.  Both have a past filled with outlawry and violence, from which they have moved on to a life of law-abiding peace.  Both are called back to their old skills early in the movie and must use them to accomplish what needs to be done.  But Link goes back to his peaceful life when he’s done; William Munny never can.

It’s kind of a bleak western.  Cobb wears an unconvincing hairpiece and seems distracted and half-crazed for much of the movie.  Dano, being mute, has no lines, and Ponch very few.  Dano and London were in Saddle the Wind the same year.  This movie was not a critical or commercial success, blamed in part on Cooper being too old for the part.  (Cobb, playing his supposed uncle, was in fact ten years younger than Cooper.)  The fight with Coaley is not entirely convincing, partly because of Cooper’s age and physical limitations.  French critics liked the film, though.  Adapted from Will C. Brown’s novel The Border Jumpers.  In color.