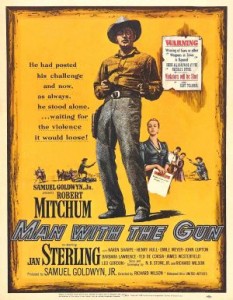 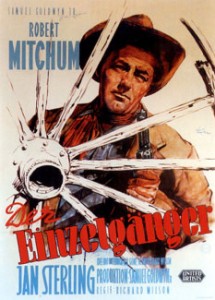 Robert Mitchum is Clint Tollinger, who is made marshal in the town of Sheridan in order to clean it up.  Sheridan is controlled and terrorized by Dade Holman (Joe Barry), the local land and cattle baron.  Tollinger specializes in quick taming of wild towns and is good with a gun, but the town becomes uncomfortable because of that, especially when some businesses suffer.  Tollinger is in town to see his estranged wife Nelly Bain (Jan Sterling), who is madam of a bunch of unusually attractive “dance-hall girls” (including a very young and uncredited Angie Dickinson as Kitty).  Impetuous young swain Jeff Castle (John Lupton) gets shot by Holman’s men, and his girl friend (Karen Sharpe) seems to be transferring her affections to Tollinger.

Tollinger can take care of most of the trouble and politics thrown at him until the madam reveals the fate of their daughter.  Unbalanced emotionally by the news, Tollinger then burns down Holman’s saloon and shoots it out with its manager Frenchy Lescaux (Ted de Corsia) after goading Lescaux into the confrontation.  Holman develops a trap for Tollinger; in the final shootout, Tollinger wins but is shot when he defers to the swain at the last moment so he can look good for his girl.  Presumably Tollinger’s wound is not fatal, though. 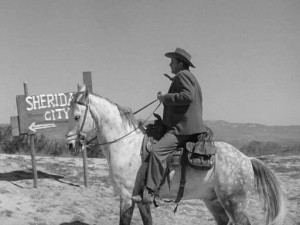 Tollinger (Robert Mitchum) rides into the town of Sheridan.

Kind of a western-noir, this compact movie is one of those westerns from the 1950s dealing with the uneasy relationship between a gun-slinging law enforcer and the townsmen he’s protecting (High Noon, The Tin Star, Warlock, Lawman, etc.).  It’s also a gunslinger coming to terms with his past (The Gunfighter, Lawman, The Shootist, etc.)  Mitchum is very good at playing a character who is quite competent but possibly more on the edge than anybody realizes, with unresolved fatherhood issues in this case.  The resolution of the movie doesn’t feel entirely satisfying. 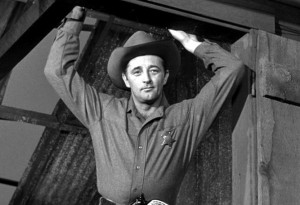 Facing down bad guys from the upper story of a barn.

Claude Akins, never a subtle bad guy, has a small role as Jim Reedy, one of Holman’s gunmen, who tries to get Tollinger with a gun hidden in his hat.  Henry Hull is the sheriff and Tollinger’s deputy in a colorful role verging on irritating.  James Westerfield is a supposed traveling drummer, who’s actually Holman’s lawyer; he’s a bit unctuous in the role.  Joe Barry, who plays Holman, isn’t seen until the film’s climax, and that works quite well.  Except for Mitchum, there’s not much star power here. 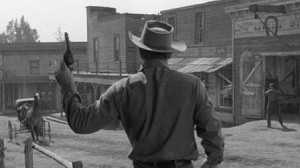 Better than most westerns, this is worth watching, although not often seen any more.  Shot on a back lot in black and white; the town has an unusual hillside feel to it.  The cinematographer was Lee Garmes.  Music is by Alex North, who later did Spartacus and recycled some of the music from this in it.  Director Wilson, a protégé of Orson Welles, did a similar movie again with Yul Brynner in Invitation to a Gunfighter in 1964.  This one is better.