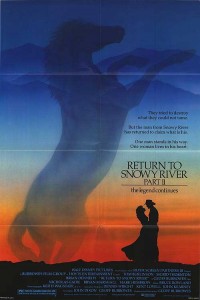 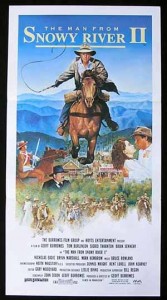 Young Jim Craig returns to the Snowy River highlands after a three-year absence, during which he has developed a herd of 100 horses so that he can marry Jessica Harrison without the young couple starting out in poverty.  Her father (Brian Dennehy, replacing Kirk Douglas from the original) would prefer that she marry young Alistair Patton (Nicholas Eadie), cavalryman and son of his banker.  Jessica has an unseemly and unladylike interest in horses, as well as a good way with them. 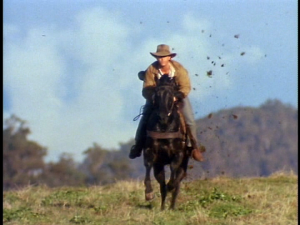 Meanwhile, Jim’s old equine adversary Stalker Brumby is defending his own herd in the wild as Alistair tries to hunt them down.  About midway through the film, Jessica decides to go with Jim against her father’s wishes, and Alistair and his henchmen steal Jim’s horses and try to kill him.  He survives and chases them by obtaining the cooperation of the old stallion Stalker Brumby, and when he wins he lets the stallion loose again.  There is an unspoken mystical relation between them.  And Jessica’s truculent father seems to come around. 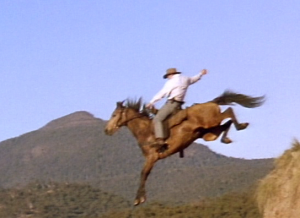 The film as shown in the U.S. is a little short on resolution.  A wedding scene was shot but not included in the final cut of the film, so it’s unclear whether Jim and Jessica actually get married.  The movie doesn’t really wrap up the fate of the nefarious Alistair Patton, either, leaving it to one’s assumptions.  It seems a little too short.  It’s a bit more formulaic than the first Snowy River film, with the class conflicts, the Australian underdog attitude, the need to go horse-hunting in the highland forests, the lingering photography marked by flying water, aerial photography and plunges down near-vertical terrain.  Like the original, it does give a sense of the sheer joy of riding a horse going full out.  But the editing isn’t as careful as it might be, lingering too long on some of the lyrical shots and taking away momentum from the action.  Brian Dennehy is an excellent character actor, but he is lacking a bit of the star presence of Douglas.  The young lovers don’t seem quite so young; it’s been six years since the first movie, which was released in 1982.