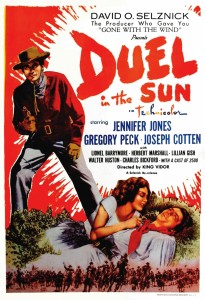 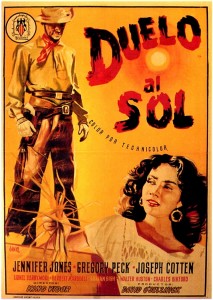 David O. Selznick’s sprawling and over-ripe western melodrama has not aged well in the more than sixty years since its release.  In some ways it seems even older than it is.  Social attitudes and movie tastes change, as this movie illustrates; and maybe the public just doesn’t have the taste for cinematic melodrama it once did.  Some of the fault lies in the overheated and clunky writing.  For a skilled director like King Vidor, the acting seems un-subtle, and there’s lots of old-fashioned violin music by Dimitri Tiomkin on the soundtrack.  Both Vidor and Tiomkin amply demonstrated elsewhere that they can do much better.  There are lightning and tempests in the background to emphasize how passions are out of control.  There’s opening narration in the weighty tones of Orson Welles.  The whole thing seems old-fashioned even for its time.

At the movie’s heart are the two McCanles brothers, the heirs of the Spanish Bit Ranch, a huge Texas ranching empire owned by Senator Jackson McCanles (Lionel Barrymore).  The brothers are set against each other by mixed-race temptress Pearl Chavez (Jennifer Jones, who was in general more likely to play saints and nuns than half-Indian seductresses).  Lillian Gish is Laura Belle McCanles, the McCanles mother, who brings Pearl into the household initially.  For once, Gregory Peck plays the bad brother, the more macho but increasingly evil Lewt McCanles.  Senator McCanles is a more or less typical overbearing cattle baron who wants his own way, except that he never seems to have a very good grip on what he’s doing.  It’s not one of Barrymore’s better performances, although he could be an excellent character actor with better material and direction. 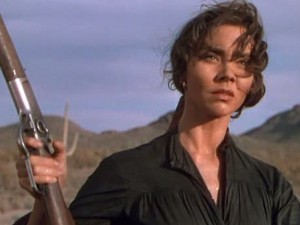 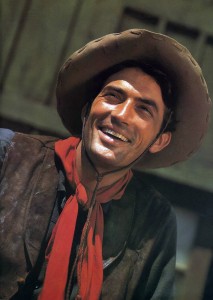 Lewt gets worse and worse through the movie, refusing to marry Pearl or let the decent Sam Pierce (Charles Bickford) marry her, either, after Lewt heartlessly has his way with her.  He causes a nasty and colorful train wreck worthy of Cecil B. DeMille (DeMille loved to film trains crashing).  The Senator chases good son Jesse McCanles (Joseph Cotten, never entirely comfortable in westerns) away to Austin, where he gets engaged to a railroad heiress.  Finally, Lewt shoots Jesse down in cold blood, and, when it looks like Jesse will survive, Pearl decides she has to shoot Lewt or he’ll eventually be successful in his attempts to kill his good brother.  They (Pearl and Lewt) shoot each other in the desert and die in each other’s arms. 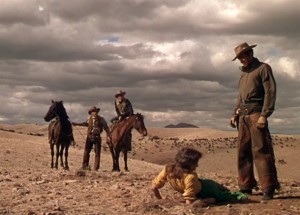 Both Jones and Peck seem miscast in this epic, although Jones was nominated for an Oscar as best actress for her performance here.  And there are some social attitudes that don’t play so well these days.  For example, Butterfly McQueen is a stereotypical black domestic named Vashti, painful to watch now.  An underlying assumption seems to be that one of the reasons for Pearl’s sexual voracity is her mixed racial heritage.  It might be acceptable if it came from her lack of education, perhaps, but not from her half-Indian ancestry.  Her devotion to Lewt seems to be born out of his rape of her, a concept modern feminists are bound to find offensive.  These may have been common attitudes in the 1870s, when this movie is set, or in the 1920s, when Vidor was already a major director of silent movies and Gish and Barrymore major stars.  Or maybe they come from Niven Busch’s novel on which this steamy epic was based.  But they make the movie seem old and uncomfortable now. 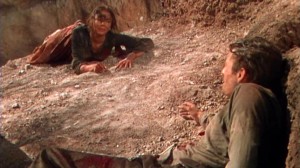 It had a very big budget for its time, and it looks good.  The movie is very much the creature of its producer, David O. Selznick, Jones’s future husband and the Svengali of her career.  Although it made some money eventually, it marked the end of this kind of extravaganza for Selznick.  Reportedly, Selznick’s constant interference is responsible for the overwrought nature of the many of the movie’s elements.  It had worked for Gone With the Wind eight years earlier, but not here.  The affair between Jones and Selznick, both married to other spouses at the time, was one of the worst-kept secrets since the movie industry moved to California, giving an edge to the film’s notoriety with the public.

Nicknamed “Lust in the Dust,” it’s kind of a clunky movie despite all the talent involved.  The word most often associated with it today is “campy.”  Watch out for the screen awash not only with vivid Technicolor, but with strong undercurrents of sexual obsession.  At 144 minutes, it’s long for a western in the 1940s.  But maybe not for a Selznick epic. 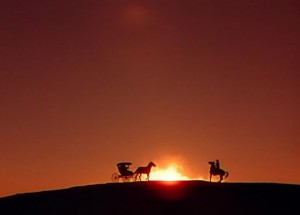 At the time of its release, it was the most expensive movie ever made.  Selznick spent two years making it, at a then-astronomic cost of $6 million.  Although King Vidor is named as the director, Otto Brower, William Dieterle, Sidney Franklin, William Cameron Menzies, Josef von Sternberg, and even Selznick himself sat in the director’s chair at one point or another during production.  Martin Scorsese claims this was the first movie he ever saw and one of the reasons he became a director.  Maybe it’s also the reason he’s never made any westerns.  Still, it’s something you have to see if you have ambitions to be the next Scorsese.  Gregory Peck was in lots more westerns, including, ten years later, another large-scale family epic like this one:  The Big Country.  It’s much better. 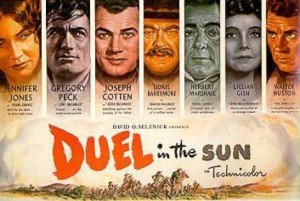