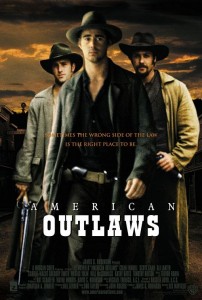 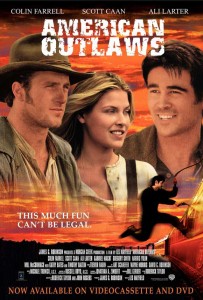 This is a good-looking, fanciful and not very factual retelling of the Jesse James legend.  There are a lot of young, good-looking actors in this one, most of whom were not well known when it was made.  Seemingly inspired by Young Guns, this makes the Jameses and Youngers seem like teenagers, and ends with the outlaws winning:  with his feisty young wife, the newly married Jesse goes off to Tennessee, where the railroad and the Pinkertons will be less interested in pursuing him.  There is nothing about such negative aspects of Jesse’s later life as the resumption of his outlaw career, the disastrous raid on Northfield, Minnesota, or Jesse’s eventual murder by a quasi-gang member.

The focus is on the social battle between a heartless, fraudulent railroad and the good-hearted Missouri peasantry that supports the gang because the railroad oppresses them.  It emphasizes conflicts and dissension within the gang, especially between Jesse and Cole Younger.  Jesse (Colin Farrell) is presented as slicker with a gun than he probably was.  Although handy enough with weapons, Jesse was not primarily a gunfighter.  His brother Frank had the reputation of being the best with a gun in the James-Younger gang.  Jesse was a charismatic leader and planner, and quite cold-blooded when it came to the execution of his crimes.  As depicted in this movie, the gang apparently had an infinitely expandable roster of members when necessary; in the final scene there appear to be upwards of 50. 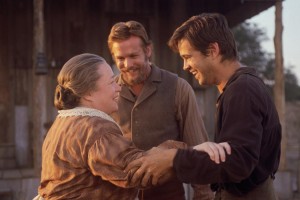 Farrell captures a version of Jesse’s charisma and attractive qualities, without the coldness and brutality.  Gabriel Macht is fine as older brother Frank James, although not much is made of his role.  Scott Caan seems stocky and pugnacious as Cole Younger; some of that is the fault of the script, and some is bad casting.  A very blond Ali Larter is Zee Mimms, Jesse’s first cousin (named after his mother), romantic interest and finally wife, and she seems very 21st century feminist, although not terribly bright.  Kathy Bates has a small role as Ma James (Zerelda Samuel), killed in a Pinkerton raid on her home (a young son was actually the one killed, and Mrs. Samuel was injured and lost an arm as a result of the real raid). 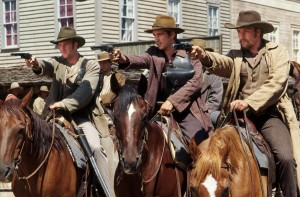 Timothy Dalton is a malevolent Allan Pinkerton pursuing the gang with a Scottish accent, and his twist at the end is not terribly persuasive (inadequate preparation in the script and cutting of the film prior to that).  Harris Yulin is the corrupt (and fictional) Thaddeus Rains, head of the fictional Rock Northern Railroad which Jesse despises and robs, and source of the purpose and funds for chasing Jesse and the gang.  Canadian (born in Edmonton and presumably Native American) Nathaniel Arcand plays Comanche Tom, a member of the gang unknown in actual history.  Not to be confused with American Bandits, also about Frank and Jesse but without much star power or budget. 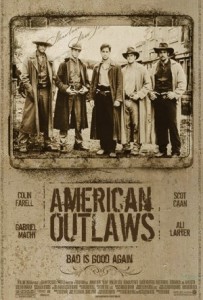 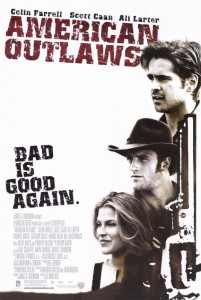 Director Lee Mayfield has worked principally in television.  Not a terrific film, and it didn’t do well at the box office, although it’s a guilty pleasure for some and others find overtly (if unintentionally) comedic elements in it.  Compare it with Texas Rangers, another youth-oriented (and not terribly successful) western released the same year.  The proliferation of different posters suggests that those backing the movie hoped heavy marketing would distract potential audiences from the fact that their product wasn’t very good.