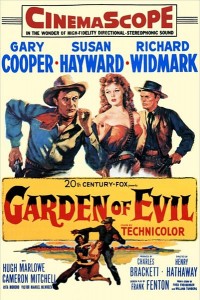 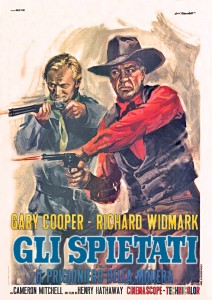 During the California gold rush (putting this more or less in the 1850s), passengers on a steamship are stranded in Puerto Miguel on Mexico’s Pacific coast.  They include Hooker (Gary Cooper), a former sheriff from Texas; Fiske (Richard Widmark, in what turns out to be a good-guy role), a gambler; and Daly (Cameron Mitchell), a bounty hunter.  Leah Fuller (a husky-voiced Susan Hayward) arrives in town, desperate for help in getting her mining engineer husband John out of a gold mine, where he lies trapped with a broken leg.  The title of the film refers to the region surrounding the mine, about three days of rough travel into Apache country.

Fiske:  “You know, at first I thought she was one of those women who come along every so often and fascinate men without even trying or even knowing why.”

Hooker, Fiske and Daly sign up for $2000 each, along with Vicente Madariaga (Victor Manuel Mendoza), a Mexican.  After an arduous trip on which Daly makes a move on Leah, they find the mine, rescue Fuller (Hugh Marlowe) and fix his leg.  The unreliable Daly gets his fill of gold and they head back, followed by Apaches and slowed down by the injured and embittered Fuller.

At the first stop, Daly helps Fuller escape on a horse to get rid of him.  Daly is killed by the Indians, and the group finds Fuller’s body hung upside down from a cross.  The party is now on the run. Vicente is killed, and they reach the narrow trail down a cliff just ahead of the Apaches.  Fiske stays behind to hold them off, and Hooker and Leah make their escape.  Hooker goes back to help Fiske, but it’s too late.  The suggestion is that Leah and Hooker go off together, perhaps with some of the gold from the cursed mine.

Motivations are uneven.  Leah appears to love her husband (he doesn’t think so), but she also appears to be attracted to Fiske (maybe) and Hooker, though not to Daly.  It’s taken for granted that she drives all the men crazy with lust, although only Daly seems to act badly on that impulse.  (What, no bathing in a stream scene?)  The Apaches’ motivation doesn’t appear to be all that consistent, either, and they don’t look much like Apaches.  Clothes and equipment (guns, particularly) don’t fit the 1850s.  The writing is a little spotty, and there are obvious comparisons to Treasure of the Sierra Madre.  One or two of Cooper’s brief speeches get a little heavy-handed, but his presence is strong as always.  This story could have used a bit more character background development.

“I guess if the earth were made of gold, men would still die for a handful of dirt.”

There are questions left at the end.  For example, did any of the gold get out, and what happened to it?  Did Hooker get his $2000?  This is watchable, but not the unrecognized gem some would claim.  Spectacularly shot on location in Mexico in early Cinemascope and Technicolor, but there are occasional obvious painted backdrops, too.  Good score by Bernard Herrman and competent direction by Henry Hathaway.  If you like Susan Hayward in this, catch her in Rawhide with Tyrone Power, where she’s even better.