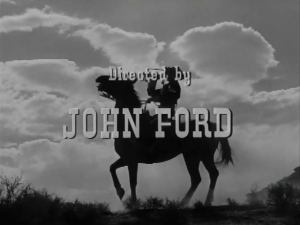 Even those who are not fond of John Ford concede that he’s probably the greatest director of westerns ever.  And it’s not even close.  Ford made more great westerns than anybody else, even if most of his work in silent films has disappeared.  He pioneered location shooting, being the first to use the dramatic landscape of Monument Valley as a setting.  He was also known for a certain kind of long shot, showing his human protagonists against a vast western terrain and sky.  He made a star of John Wayne, the biggest star western movies have yet seen, although he’s not the one who gave Wayne his first starring role.  (That would be Raoul Walsh, in 1931’s The Big Trail.)  Ford’s visual sense remains with you after his movies are over.

Born John Martin Feeney in Maine in 1894, Ford was the son of Irish immigrants.  He moved to California and began working in film production in 1914 with his older brother Francis (1881-1953), using “Jack Ford” as a professional name.  Ford had an uncredited appearance as a Klansman in D.W. Griffith’s classic Birth of a Nation, as the man who lifts up one side of his hood so he can see clearly.  Despite an often combative relationship with Francis, within three years Jack had progressed to become his brother’s chief assistant and often worked as his cameraman.  By the time Jack Ford was given his first break as a director in 1917, Francis’ career as a director was hitting the skids, and he ceased working as a director soon afterward. 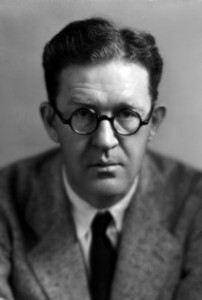 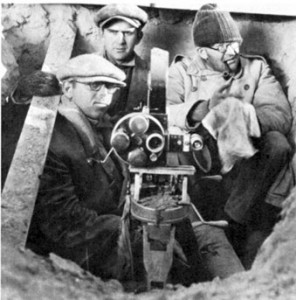 Ford as a young director, and directing 1924’s The Iron Horse (on the right).

Ford started working as a director in 1917, probably on the silent two-reeler The Tornado, and he was an active director for the next fifty years.  Of the seventy silent movies he made, sixty are considered to be “lost.”  Although he made westerns almost from the start, he did not specialize in them at this stage of his career.  He made everything else, too.  He made 25 films with silent western star Harry Carey, only two of which survive.   Of his surviving silent westerns, probably the two best are The Iron Horse (1924), an epic account of the building of the first transcontinental railroad, which was one of the biggest cinematic successes of the 1920s, and Three Bad Men (1926), his last silent western.  He would not make another western for thirteen years, until Stagecoach in 1939.

However, when he did make another western, Stagecoach revolutionized how Hollywood saw western films.  The genre had mostly fallen out of favor with the studios in the late 1920s, and almost all westerns made during the 1930s were low-budget quickies.  Stagecoach was not expensive to make, but it had a good story, an excellent acting ensemble, strong visuals both in the landscape and in shot composition, and state of the art stunt work for its day.  Westerns were starting to be a more significant cinematic art form.  Reportedly, Orson Welles watched Stagecoach forty times as part of his preparation for making Citizen Kane.

This immediate pre-World War II period was also the time when Ford was making such box office and critical successes as Drums Along the Mohawk, Young Mr. Lincoln, The Grapes of Wrath and How Green Was My Valley—a remarkable string for anybody.  The last won both Best Picture and Best Director Academy Awards. 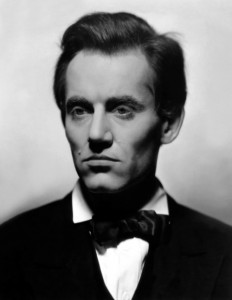 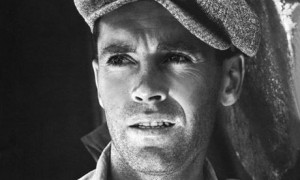 He made documentaries for the Navy during the war, and was wounded during filming on Midway during the Battle of Midway.  He won two more Academy Awards for this documentary work.  It was on his return from the war that his impressive string of westerns began, with the story of Wyatt Earp in Tombstone in My Darling Clementine, followed by his cavalry trilogy (Fort Apache, She Wore a Yellow Ribbon and Rio Grande), 3 Godfathers and Wagon Master.

Writer Nunnally Johnson said of Ford and his need for control (not uncommon among directors), “I think John Ford almost dies because he can’t write.  It just runs him nuts, that he has thoughts and ideas and has never trained himself to put them down on paper.  And I’ve found that true of so many directors.  They’re just so thwarted.”  But as a writer, Johnson also thought that writers were among the least appreciated participants in the movie processes. 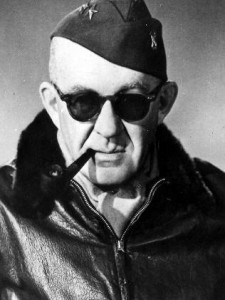 In the 1950s, he didn’t make as many westerns.  He won another Best Director Oscar for The Quiet Man in 1952; it was his fourth such award.  But one western he did make during the 1950s was one of his very best:  The Searchers, with John Wayne and Jeffrey Hunter.  And he closed the decade with the Civil War cavalry story The Horse Soldiers, with John Wayne and William Holden.  As he moved into the 1960s, his best remaining western was 1962’s The Man Who Shot Liberty Valance.  There were other good westerns—Two Rode Together, Sergeant Rutledge and Cheyenne Autumn—but they were not among his greatest.  His health declined in the late 1960s, and he died in 1973.

Ford was known for “cutting with the camera,” especially when he was younger.  That meant shooting only the film he wanted to use, and it also meant visualizing the finished film as it was being shot.  According to Ford that practice reduced opportunities for the studios to mess around with his work.  He did that with Stagecoach, for example.  While it saved on film and gave him a greater degree of control over the final results, it was in effect working without a net.  “I don’t give ’em a lot of film to play with.  In fact, Eastman used to complain that I exposed so little film.  I do cut in the camera.  Otherwise, if you give them a lot of film ‘the committee’ takes over.  They start juggling scenes around and taking out this and putting in that.  They can’t do it with my pictures.  I cut in the camera and that’s it.  There’s not a lot of film left on the floor when I’m finished.”

He was also known for having a recurring cast of characters, most of whom are still strongly associated with his work today.  Most prominent among these was John Wayne, although he also used Henry Fonda and James Stewart, among the biggest stars of their time.  It was the supporting characters who came back time after time:  Ward Bond, Mae Marsh, Victor McLaglen, Jane Darwell, Harry Carey, Harry Carey, Jr., John Qualen, George O’ Brien and a number of others.   There have even been books written about “the John Ford stock company.”  (See Bill Levy’s Lest We Forget, 2013.)  Loyalty was important to Ford. 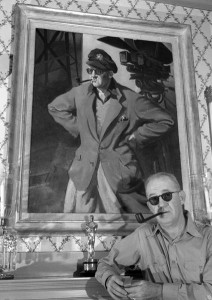 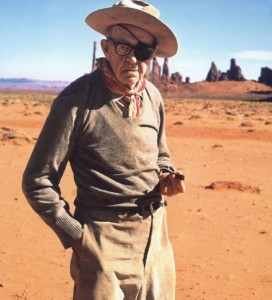 Ford with a portrait and an Oscar, and an aging Ford in his natural habitat.

That doesn’t mean he was always pleasant to work with; he was known for riding even his stars and treating them badly during shooting.  He thought it produced better performances, and he’s not the only great director to take that approach.  In 1955, Warner Brothers hired Ford to direct Mr. Roberts, with Henry Fonda, who had played the role on Broadway and who had misgivings about some of Ford’s direction.  In a meeting with Fonda and producer Leland Hayward, Ford lost his temper and punched Fonda, creating a lasting rift between the two.  After repeated clashes during the filming of 3 Godfathers, Pedro Armendariz would never work with Ford again.  Some stars, like Wayne, would put up with Ford’s sometimes abusive style.  Maureen O’Hara said of him, “John Ford was the world’s greatest storyteller because he was the world’s most convincing liar.  He rarely told the truth and rarely lived the truth.”  Taking its title from Ford’s last silent western, the 2013 book Three Bad Men by Scott Allen Nollen applied that title to Ford, Ward Bond, and John Wayne, in part because of their politics.  That’s too harsh, but Ford could be difficult to work with and in his private life as well.  And he was always one to tend his own legend, too.

On the other hand, a story is also told about how during the McCarthy era of the 1950s, he bluntly and effectively stood up to a bullying Cecil B. DeMille, who was trying to get Joseph L. Mankiewicz removed as head of the Directors’ Guild of America and require a loyalty oath.  After four hours of DeMille and his supporters dominating the meeting, Ford stood and made this statement:  “My name’s John Ford.  I make Westerns.  I don’t think there’s anyone in this room who knows more about what the American public wants than Cecil B. DeMille—and he certainly knows how to give it to them…. [looking at DeMille]  But I don’t like you, C.B.  I don’t like what you stand for and I don’t like what you’ve been saying here tonight.”  After the vote, Mankiewicz remained president.

Ford’s work can sometimes seem old-fashioned, and it probably did in his day to some degree.  His occasional sentimentality, nostalgia and fondness for a certain kind of comic relief do not always play well today.  But for Ford, more than for any other director, you can’t know westerns without being familiar with his work.  There have been a number of biographies of Ford; my favorite is Scott Eyman’s Print the Legend:  the Life and Times of John Ford.  Ingmar Bergman called him “the best director in the world.”  Frank Capra referred to him as “the king of directors.”  And Alfred Hitchcock said that “A John Ford film is a visual gratification.” 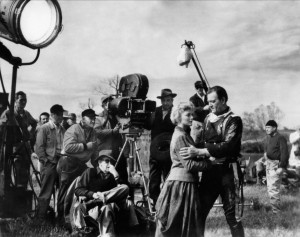 Ford Essentials:  Ford has a larger body of must-see work than any other director of westerns.  These include Stagecoach, My Darling Clementine, Fort Apache, She Wore a Yellow Ribbon, The Searchers, and The Man Who Shot Liberty Valance.

Second-Rank Ford:  Not as good as his top-flight work, most John Ford westerns are nevertheless well worth watching.  These include Drums Along the Mohawk, 3 Godfathers, Rio Grande, Wagon Master (said to have been a personal favorite of Ford’s), The Horse Soldiers, Two Rode Together, Sergeant Rutledge and Cheyenne Autumn.  Counting the Essentials and the Second-Rank, that makes fourteen westerns.

Non-Western Essentials:  The Informer, Young Mr. Lincoln, The Grapes of Wrath, How Green Was My Valley, and The Quiet Man.