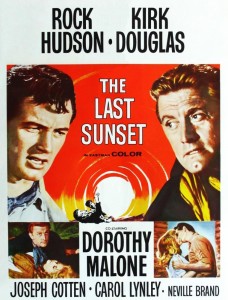 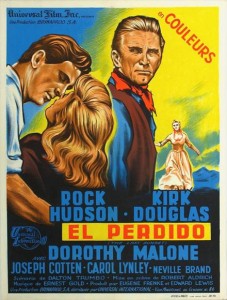 Gunman Brendan O’Malley (Kirk Douglas) arrives at the Breckenridge ranch in Mexico, to find that lady of the ranch is old flame Belle (Dorothy Malone) and that her weak alcoholic husband John (Joseph Cotten) is preparing for a cattle drive to Texas that they are unlikely to be able to accomplish.  Their nubile daughter Melissa (or Missy, played by Carol Lynley) is coming along, too.  O’Malley offers his help (for a price:  one-fifth of the herd plus Belle); now all they need is a trail boss who knows the way, and he promptly shows up in the form of Dana Stribling (Rock Hudson), a Texas lawman who is hunting O’Malley for killing his no-good brother-in-law.  The two agree to put aside resolution of their differences until the herd gets to Texas.

As was often the case, Douglas made an unconventional protagonist for a western.  He wears tight-fitting black and uses a derringer instead of a larger gun.  He has been hunting Belle since the Civil War, when they had something going in Virginia.  This is a cattle drive western, with the usual incidents:  unreliable drovers (the nefarious Dobbs brothers, played by Neville Brand and Jack Elam); inclement weather (a dust storm), Indians (Yaquis), and a stampede.  As they head the herd north, Breckenridge encounters former Confederates in a bar; they were from his unit under Stonewall Jackson and confront Breckenridge with having run at Fredericksburg.  They’re forcing him to show them his wound (in his backside) when O’Malley and Stribling intervene.  As the three leave, one of the Confederates shoots Breckenridge in the back. 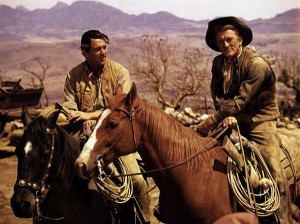 Now Belle is a widow, but Stribling shows romantic interest in her.  O’Malley rescues Stribling during a storm, and the Dobbs brothers make their move.  Belle shoots one, and O’Malley and Stribling recover the herd.  O’Malley gratuitously shoots a Yaqui (whose corpse is unusually cooperative in being moved to a horse), and Stribling gives the tribe a fifth of the herd to mollify them—O’Malley’s share.  As Belle develops feelings for Stribling, O’Malley and the much younger Missy also start to bond romantically.  On the night before the herd crosses the Rio Grande to Crazy Horse, Texas (presumably making this after 1876), Missy wears Belle’s yellow dress from a night long ago, and she and O’Malley make plans.

[Spoilers follow.]  Once the herd is in Texas, however, Belle discloses to O’Malley that Missy is his daughter.  Stribling and O’Malley (with his derringer) carry out their showdown, O’Malley characteristically without his hat.  When Stribling wins, he finds that O’Malley’s derringer wasn’t loaded. 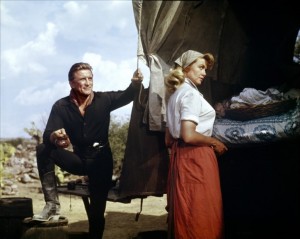 The women are more central to what’s going on here than they are to most westerns, giving this sort of a melodramatic feel with several sudden revelations along the way.  Malone is very good.  Hudson is adequate but pales beside Douglas in the meatier role.  And he wears a strange hat.  Adapted by Dalton Trumbo from a novel by Howard Rigsby, Sundown at Crazy Horse. Not bad work from director Aldrich, who had directed Vera Cruz in 1954 and would yet do Ulzana’s Raid ten years later.  Shot in Aguascalientes, Mexico.