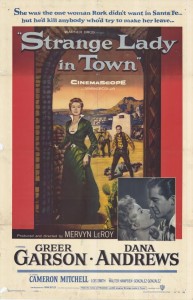 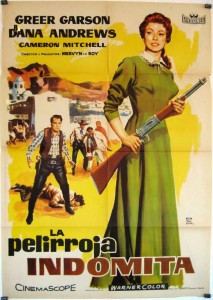 The strange lady is Dr. Julia Winslow Garth (a very red-haired Greer Garson, 51 and playing twenty years younger quite convincingly in the only western of her career), and the town is Santa Fe in 1880.  Originally from Boston, she has come to Santa Fe to escape the oppression of the overwhelmingly male establishment in the medical profession, only to find it present in her western refuge in the person of widower and rancher Dr. Rourke O’Brien (Dana Andrews).  She lives with her brother, Lt. David Garth (Cameron Mitchell), who seems to have considerable personal charm along with an unfortunate predilection for cards and the shadier side of the law.  When Julia shows up, Lt. Garth is unable to meet her because he is the subject of a court of inquiry for selling the army stolen cattle.

Julia’s home in Santa Fe is next door to the Catholic church run by Father Gabriel Mendoza (Walter Hampden), a saintly priest who also runs a hospital on the side, presided over medically by O’Brien.  Julia establishes her medical bona fides by healing a blind Mexican boy and others, although she runs afoul of the brusque O’Brien by espousing the modern methods of Dr. Joseph (referred to for some reason as Jacob) Lister, which O’Brien views as a passing fad.  Meanwhile, it becomes clear that O’Brien’s tomboyish daughter Spurs (Lois Smith) is attracted to Julia’s brother.

The two doctors, talking things over.

Although they are at odds professionally, O’Brien is attracted to Julia personally, trying to get her to agree to marry him.  But they keep falling out over O’Brien’s overbearing and authoritarian ways.  At the governor’s ball, Julia rescues the territorial governor Lew Wallace from his too-tight celluloid collars, although O’Brien has already advised him that the trouble is his weak heart.

Meanwhile, Lt. Garth falls out with his captain over cards and punches him, forcing Garth to flee to avoid another court martial.  He joins a bunch of outlaw acquaintances in robbing the local bank, and Father Gabriel is killed when the gang’s escape goes awry.  Finally Julia persuades her brother to surrender, but in doing so he makes as if to escape and is shot down.  The resulting condemnation of her by the close-minded community convinces Julia she must now leave, until O’Brien stands up for her and finally persuades her to marry him. 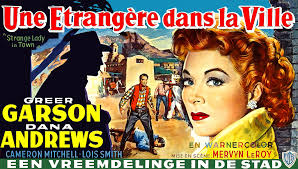 In addition to the the historical New Mexico governor, 19-year-old Billy the Kid makes a brief appearance (Nick Adams in a cameo), theoretically making this 1879 or so.  In all, this is more watchable than you’d think for a movie you’ve never heard of.  Garson, Andrews and Mitchell are good in their respective roles; some like Lois Smith as Spurs, while others find her occasionally grating.  This was part of a trend in the 1950s to have an established actress as the center of a western–the so-called cattle queen westerns, with stars like Barbara Stanwyck, Joan Crawford and Marlene Dietrich.  And now Greer Garson.  In real life, she and her husband had a ranch a few miles from Santa Fe.

Mervyn LeRoy was not a natural director of westerns.  He was much more at home in upscale romances.  Frankie Laine provides the title song.  In color partially shot in Old Tucson, Arizona.  Not a great title.

For Dana Andrews in other good westerns, see him as the primary lynching victim in The Ox-Bow Incident (1943), and as an almost-lynching-victim in Three Hours to Kill (1954).