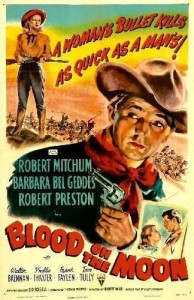 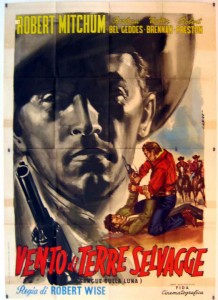 A watchable range war saga based on a 1941 novel by Luke Short.  Jim Garry (Robert Mitchum) is drifting from Texas, when he’s invited by old friend Tate Riling (Robert Preston, in his sleazy friend mode) to join him in a get-rich-quick scheme with corrupt Indian agent Jake Pindalest (Frank Fayden).

John Lufton (Tom Tully) is the local cattle baron, who has long provided beef for the reservation while grazing his herds on the Ute reservation land.  Pindalest, on Riling’s urging, has given Lufton notice that he’ll no longer be buying Lufton’s beef, and Lufton has to find new grazing land.  He’s trying to move his cattle back to the basin where he used to graze, but now there are homesteaders there to resist, led by Riling.  Kris Barden (Walter Brennan), who used to work for Lufton, is prominent among them. 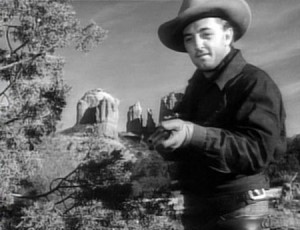 Lufton has two daughters, one of whom, Carol (Phyllis Thaxter), is romantically interested in Riling and the other, Amy (Barbara Bel Geddes), takes a few shots at Garry.  After being fully informed of the set-up and participating in stampeding Lufton’s herd, Garry decides the scheme isn’t for him and saves Lufton from two of Riling’s gunmen.  He’s hurt in a fight with Riling but gets Pindalest to tell the army to back off on the deadline for removing Lufton’s herd.

Riling, PIndalest and a couple of gunmen come after Garry, who’s wounded and holed up at Barden’s place.  Amy Lufton shows up to give medical care and help fight off the bad guys.  (You can tell Riling’s sleazy because of the loud plaid jacket he wears.)  In the end Garry kills one of the gunmen, shoots it out with Riling and gets Amy. 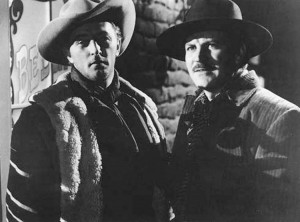 A good cast, with a complicated story for the 90-minute length of the movie.  Note Garry’s authentic-looking hat, different than 1950s-style hats in westerns.  Some shots look like Monument Valley, but mostly it was filmed on the RKO lot in Encino, with some outside of Sedona, Arizona.  Like Yellow Sky, released the same year, it has some noir-ish elements, especially in the use of light and shadow and low camera angles.  An RKO release in black and white, directed by Robert Wise (best known for The Sound of Music).  Long unavailable on DVD, it was released on blu-ray in 2020–a very nice, clear transfer from Warner Bros. Archive.

According to Lee Server’s 2001 biography of Mitchum (Robert Mitchum:  “Baby, I Don’t Care”), director Wise claimed “the first scene we shot after Mitch got outfitted was in the barroom.  Walter Brennan was sitting at a table with a couple of pals, and Brennan was very interested in the Old West, it was a hobby of his.  And I’ll never forget when Bob came on the set, just standing there, wth the costume and the whole attitude that he gave to it, and Brennan got a look at him and was terribly impressed.  He pointed at Mitchum and said, ‘That is the goddamndest realest cowboy I’ve ever seen!’”