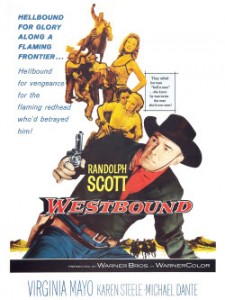 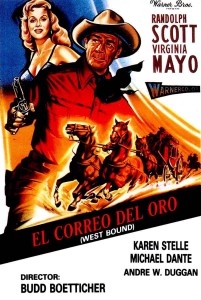 Although this is usually reckoned about the least of the Boetticher-Scott westerns, it’s not terrible.  According to Boetticher, after the third of his pictures with Randolph Scott, he was told that Scott had an obligation to Warner Brothers to make one more picture, and this was it.  The Ranown movies were made for Columbia.  The best of the Ranown movies were written by Burt Kennedy; this was written by Bernie Giler.  The score is standard western movie music by Elmer Bernstein, though. 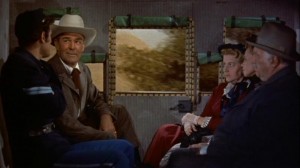 Scott is Captain John Hayes, returning to Julesburg, Colorado Territory, during the Civil War to make sure that gold from California gets to the Union, where it’s going.  Near Julesburg, he drops off a young couple, the Millers; the husband is a one-armed Union veteran (Michael Dante) and the wife is played by the Jane-Russell-esque Karen Steele.  In town, Hayes finds the Overland Stage in disarray, with its station closed and its stock gone.  His former flame, Norma (Virginia Mayo), has married Clay Putnam (Andrew Duggan), a long-time rival with Confederate sympathies.  Putnam and Mace (the swarthy Michael Pate, an Australian actor who frequently played Indians), a hired gun, are behind the depredations against the Overland Stage.

Hayes hires the young couple to run a stage station at their ranch.  There are raids on various stage stations and various murders before Hayes has it out with Putnam and Mace in Julesburg.  At the end of the movie, Putnam is dead (as is the young one-armed Miller), and there is a visual implication that Hayes and Norma may resume their relationship.  But then Hayes makes it clear that Norma is going back East, and he’s more interested in the young widow Jeanie Miller (as was Budd Boetticher; she became Mrs. Boetticher). 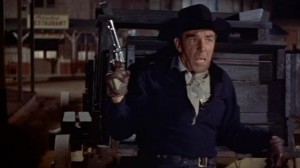 It’s short, about 75 minutes, and it’s not bad.  It just isn’t as good as most of the Ranown westerns Boetticher and Scott made.  Written by Berne Giler  This was one of the last Boetticher westerns to be released on DVD, in 2009.