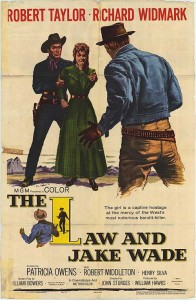 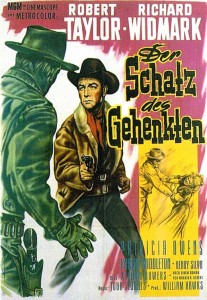 This is from director John Sturges’ early period; he made several very good westerns in the 1950s.  His major period was thought to be a little later, in the 1960s with larger-scale movies (The Magnificent Seven, The Hallelujah Trail, The Great Escape).  But with Escape from Fort Bravo, Bad Day at Black Rock, Last Train from Gun Hill and others, his work is worth seeking out.

Robert Taylor was usually kind of a wooden performer, but that stoic quality can work okay in westerns, of which he made several in the 1950s.  The real star of this modest western (shot at Lone Pine in Owens Valley) is Richard Widmark as Clint Hollister, a near-psychotic badman with whom Taylor has a past. 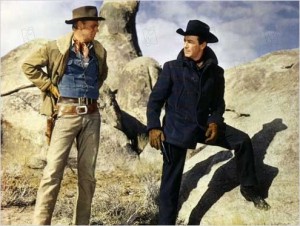 Jake Wade (Taylor) is now a city marshal of a small town in New Mexico, but he springs Hollister from jail to save him from hanging because Hollister once did the same for him when they ran in the same outlaw gang.  The completely amoral (or even immoral) Hollister then repays him by abducting Wade and his fiancée Peggy (Patricia Owens).  It turns out that when Jake left the gang more than a year previously, he took the loot from their most recent robbery.  Now Hollister wants it, and he wants to kill Jake, too.

The plots works itself out in the ghost town where Wade had buried the money in the cemetery, with a raid by Comanches and, ultimately (inevitably), a shootout between Wade and Hollister. 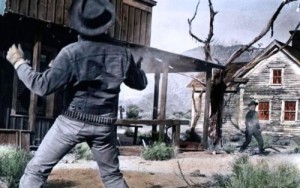 Widmark is excellent as the relentlessly nasty Hollister.  Notable supporting characters include Robert Middleton as Otero, and Henry Silva and DeForest Kelly (later of Star Trek) as other members of Widmark’s gang.  Silva shows up again as Chink, an evil henchman of Richard Boone in The Tall T, also made about this time, and as a Mexican Indian outlaw in The Bravados.  He often has an ethnic edge of some kind.  This is very watchable.  In color, with Wade wearing Taylor’s usual black.  See also Saddle the Wind, made with Taylor about the same time.