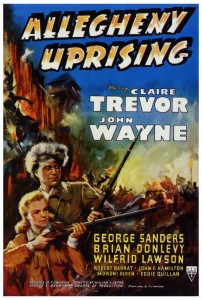 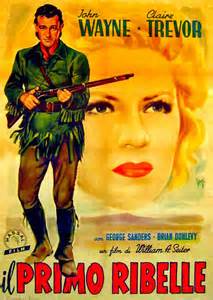 Colonial settlers vs. Indians but mostly against British authority in western Pennsylvania in 1760 in this fictionalized account of the historical Captain James Smith and his Black Boys.  Released the same year as Trevor and Wayne appeared together in Stagecoach (it was the first movie they made after Stagecoach) and John Ford made the similarly-themed and bigger-budgeted Drums Along the Mohawk, this has been much more obscure and is seldom seen these days.

At the start of the film, Smith (John Wayne) and a friend are returned from captivity with the Indians after three years.  Although the French and Indian War has just ended, Smith finds that unscrupulous traders Callendar (Brian Donlevy) and Poole (Ian Wolfe) are trading weapons and firewater to the Indians, despite the fact that the Indians will use those supplies to kill both settlers and British soldiers. 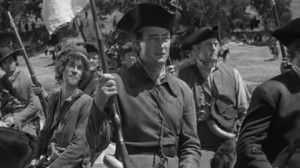 Smith leads his Black Boys to circumvent blinkered British military authority, as represented by officious and hostile Capt. Swanson (George Sanders).  They take Fort Loudon from Swanson and capture the illicit supplies there.  They again take the fort to release colonials unjustly imprisoned in manacles by Swanson.  Callendar kills Smith’s best friend Calhoon (Moroni Olsen) and charges Smith with the murder.  He declines to be released by a mob and ultimately is acquitted.

At the end of the movie he goes off to survey Tennessee with the lovely and spunkily tomboyish Janie MacDougall (Claire Trevor, mostly in anachronistic pants) in his wake.  In what is kind of an extraneous and loud role, she has spent the movie trying to get him to re-commit to a promise made years earlier, before his captivity, to marry her.  He never really does, although he seems closer at the end of the film.  Swanson is depicted more as rigid and unthinking than bad and gets sent home to England at the end of the movie. 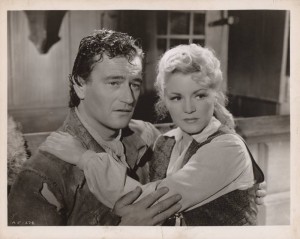 Robert Barrat, who had played Chingachgook in 1936’s Last of the Mohicans, is the local magistrate who sympathizes with Smith and the settlers.  Wilfrid Lawson is MacDougall, Janie’s Scottish heavy-drinking, Indian-scouting father.  It’s not very politically correct for our time, what with the heathen savages (“the only friendly Injun’s a dead Injun”) and “a man’s gotta do what a man’s gotta do” attitudes.  It also partakes of 1930s populist sentiments.  It looks like it was shot in southern California, not Pennsylvania.  It’s pleasant and watchable, but perhaps not all that memorable.  This was a good year for Brian Donlevy’s villainy:  he was the sleazy saloon owner in Destry Rides Again and the sadistic Foreign Legion sergeant in Beau Geste in 1939 as well.  Chill Wills has an early film role here, moving on from his musical group the Avalon Boys.  In black and white.