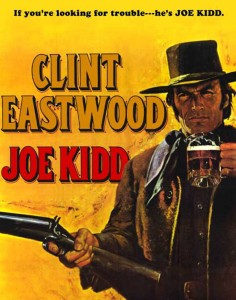 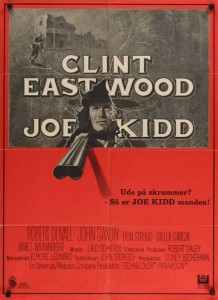 One of the last films directed by John Sturges, with a screenplay written by Elmore Leonard.  The plot is similar to that of Valdez is Coming, which was also based on a novel by Leonard and made about the same time.  This is more predictable than Valdez, mostly by having Clint Eastwood playing Clint Eastwood in the title role but also by having a less organic plot.

This story is set in pre-statehood New Mexico Territory in 1912, starting in the small town of Sinola.  Joe Kidd (Eastwood) is a former bounty hunter and tracker hired by big rancher Frank Harlan (Robert Duvall) to help his band of well-armed thugs find Luis Chama (John Saxon), a local Latino bandit chieftain/freedom fighter/land-reform agitator.  As Harlan shows himself to be merciless and his thugs brutalize those of Latino descent they come across, Kidd realizes his mistake.  He’s fired by Harlan before he can quit, and manages to escape with Chama’s girlfriend Helen Sanchez (Stella Garcia), only to find that Chama is not as noble as the native populace would like to believe, either.  There’s a great chase through the mountains, as Kidd hunts Harlan, who’s hunting Chama and Kidd. 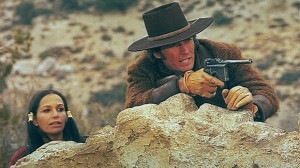 Helen Sanchez:  “He is right.  We must give ourselves up, don’t you see?  There is no other way.”

Luis Chama [clearly not a proto-feminist]:  “I do not care what you think.  I take you along for cold nights and days when there is nothing to do.  Not to hear you talk.”

Kidd leads Harlan and his men back to town, where the fight concludes in a not-terribly-believable fight, with lots of bullets flying and an improbable train crash.

Interesting elements:  (a) The brick-red pants Eastwood wears throughout the movie.  This must be an early 1970s thing.  Compare them with the red pants worn by Jim Brown in Take a Hard Ride, for example.  (b) The specialized “modern” firearms used by Harlan’s men, including the Mauser C96 pistol-with-a-stock (1896) used by Lamarr Sims (Don Stroud) and the long-range rifle–a Remington-Keene sporter (1880)–used by Olin Mingo (James Wainwright).  Special care is also shown with Frank Harlan’s Custom Savage 99 (1899) and Joe Kidd’s Cased Ross Rifle model M-10 (1910).  Apparently Elmore Leonard was behind the scrupulousness about period weaponry.  (c) Harlan’s repeated deliberate mispronunciation of Chama’s name (as “Louis Chayma”).  It gets irritating, as perhaps it’s meant to do.

Set in 1912 New Mexico, and shot at Lone Pine and Old Tucson.  This is not one of Eastwood’s best, or Sturges’, although it’s watchable.  Apparently director Sturges commented in 1978, “There are a lot of holes in Joe Kidd–some in the script that were never fixed and some resulting from cuts made because scenes just didn’t play.”  The Harlan thugs are too unrelievedly bad and despicable, and the plot is a bit outlandish (the big finale involving a train and a not-well-choreographed shootout).  With the Sturges-Eastwood-Duvall-Leonard team, one hopes this would be better than it turns out to be.  Not a long movie, at 88 minutes.  The score is by Lalo Schifrin, who did the memorable Mission:  Impossible theme.  For another western interested in post-frontier technology and weaponry, see Big Jake, set in 1909 and made about the same time as this one.