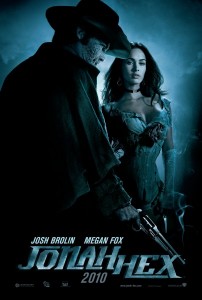 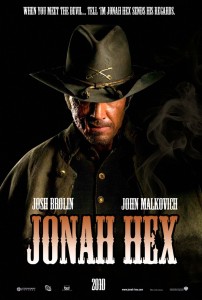 Doomed/haunted/scarred/supernatural Confederate veteran Jonah Hex (Josh Brolin) has a past, to put it mildly.  In the late Civil War he “betrayed” the unprincipled Col. Quentin Turnbull (John Malkovich), who was about to burn a hospital.  Hex shot Turnbull’s son Jeb, his own best friend, and aborted the hospital torching.  Turnbull subsequently returned the favor by forcing Hex to watch while his own family burned alive, and his own face was branded.

Kept alive by Crow Indians, the near-death experience has left him able to talk with the dead, a useful talent in his new profession as bounty hunter.  As long as he maintains physical contact with a corpse, he can temporarily resurrect and communicate with the dead, bringing the corpse physically and mentally back to its condition prior to death.  Hunting Turnbull, he discovers that the Colonel has died in a hotel fire.

Now, more than ten years after the Civil War, Hex finds that Turnbull is still alive and planning high-tech atrocities for the 1876 centennial of U.S. independence from Britain.  Hex digs up the decayed corpse of Jeb Turnbull at Gettsyburg.  After a difficult interview, Jeb discloses that his father is at the improbably-named Fort Resurrection.  Hex himself has a taste for out-of-the-ordinary weaponry and overcomes numerous obstacles and setbacks to foil Turnbull’s plot and defeat not only Turnbull but quasi-supernatural bad guys, with only the help of Lilah (or Tallulah, played by Megan Fox), a sympathetic whore in the Angelina Jolie-action heroine mode who looks and acts very 21st-century.

At Fort Resurrection, Hex sees Turnbull’s new steampunk-style weapons but is badly wounded by Burke, an Irish assassin employed by Turnbull, who escapes.  His Crow friends heal Hex again, and the pursuit is resumed.  Hex kills Burke, but Turnbull has captured Lilah and forces Hex to surrender.  As they are held prisoner on Turnbull’s weapon-ship, Lilah picks the locks on their manacles.  Together, they put a fiery end to Turnbull’s plans and to Turnbull himself.

The plot is something we’ve seen lots of times before, sometimes in epically bad and overblown movies (e.g., The Wild Wild West).  This is pretty bad, too, if not quite epically, mixing the modern, the fictional-steampunk and the 19th-century without much consistency.  This deserved a much better story, and Josh Brolin in particular is a better actor than this material allows him to demonstrate.  John Malcovich can be a very good actor, but that’s not in evidence here.  Michael Fassbender shows up before he became a big name, as the heavily (and anachronistically) tattooed Irish assassin Burke.  (The tattooing seems to have been used as a substitute for actual characterization.)  There was a lot of talent used badly in this film.  It’s said that Brolin initially did not like the script but came to appreciate its tongue-in-cheek tone.  His first instinct was right.  The character and situations are intriguing enough that this could have been interesting with a better story and script.  But it mostly isn’t. The music, by heavy metal band Mastodon, doesn’t help much. 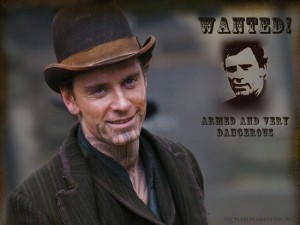 This is based on a DC comic series, another bad sign.  During its domestic theatrical run, Jonah Hex grossed only $10.5 million back on a $47 million budget, officially making it a box office bomb.  Director Jimmy Heyward was a former animator at Pixar who worked on the first two Toy Story movies, which would seem to have little in common with this material.  Relatively short, at about 80+ minutes.  Often visually dark and eye-straining.  If you’re looking for a supernatural western, Cowboys & Aliens is significantly better.