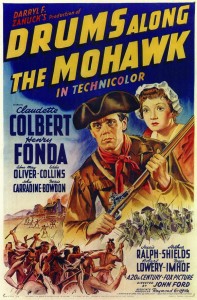 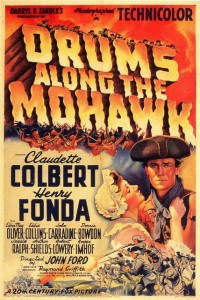 Based on Walter D. Edmonds’ 1936 best-seller of the same name, this is the story of life on the frontier in the Mohawk Valley of upstate New York during the American Revolution.  Whereas the Iroquois tribes and the British had been allies of the American settlers during the French and Indian War of the late 1750s (the setting for the events of Last of the Mohicans), they are now the enemies of the Americans trying to assert their independence from the British.

The movie opens with the marriage in Albany of Gil Martin and his new bride Lana in 1776.  The same day they move on toward his new farm near Deerfield in the Mohawk Valley.  Lana is taken aback at the rustic nature of his cabin and the sudden terrifying appearance of an Indian, who turns out to be Blue Back, a friend and a “good Christian.”  Lana meets neighbors at the nearby Fort Herkimer in German Flats, and Gil takes his place in the militia commanded by Gen. Nicholas Herkimer (Roger Imhof). 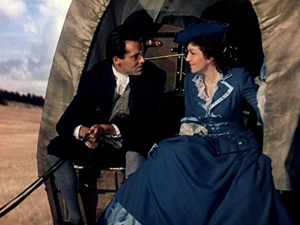 As the neighbors are helping Gil to clear his land, the farm is attacked by Indians led by one-eyed Caldwell (John Carradine), a Tory.  The farm and crops burn and the settlers straggle to Fort Herkimer, where Lana suffers a miscarriage.  With no farm, the Martins hire on to work for the widow Mrs. McKlennar (Edna May Oliver).  Soon Gil leaves with the militia, and after the Battle of Oriskany, they straggle back.  The Americans have won, but at a cost.  Gen. Herkimer is wounded in the knee; his leg is amputated but he dies from blood loss.  Gil is wounded but survives.  Lana is expecting again. 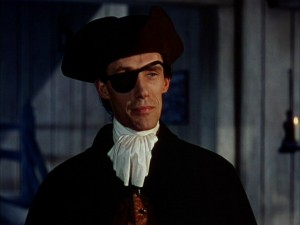 Tories and Mohawks attack German Flats, and the settlers again take refuge in Fort Herkimer.  Mrs. McKlennar is mortally wounded, and powder and ammunition run low.  Gil escapes and runs toward Fort Dayton for reinforcements, followed by three Mohawks.  Those in the fort are pressed hard, as the Mohawks force the gates and attack the church where the women, children and last defenders are holed up.  At the last moment the regular army from Fort Dayton appears, the Mohawks are vanquished, Cornwallis has surrendered to Washington, and the new nation is born.  The implication is that Blue Back has killed the Tory Caldwell.  Mrs. McKlennar has left her place to the Martins, and they resume the life they had planned in 1776.  The film has covered a period of about five years without being very specific about the passage of time.

This was director John Ford’s first film in Technicolor, made right after Stagecoach and Young Mr. Lincoln.  You can see elements of his developing visual style in shots with a two-wheel horse-drawn cart along a ridge against a looming sky, and with the three Mohawks pursuing Gil outlined against a red sunrise as they crest a ridge. 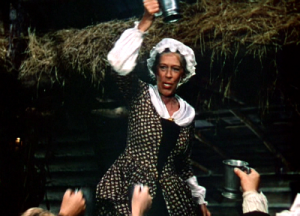 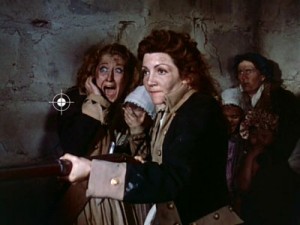 The Widow McKlennar (Edna May Oliver) buys a round; Lana holds off the savages.

Henry Fonda is good (it was his second film made with Ford, after Young Mr. Lincoln), and Claudette Colbert is fine as previously-pampered Lana who adapts to life on the frontier.  (Jean Arthur would have been spunkier and more interesting, and Claire Trevor would have been sweeter and a little more age-appropriate.)

The strength of this movie is in several strong performances by supporting characters, starting with Edna May Oliver as the forthright Mrs. McKlennar.  Roger Imhof is an avuncular Gen. Herkimer with an appropriately German accent.  Arthur Shields is good as Rev. Rosencrantz, the German Flats pastor, and Chief John Big Tree is excellent as Blue Back, the Christian Indian.  Big Tree had been in 1924’s The Iron Horse and Stagecoach (1939), and will show up again in She Wore a Yellow Ribbon as an old Cheyenne friend of Capt. Nathan Brittles.  In fact, he was a Seneca who was in 59 films between 1915 and 1950.  Ward Bond is effective as Adam Hartman, Gil’s close friend in the militia, and John Carradine is a good but shadowy figure as the villainous one-eyed Tory Caldwell, apparently based on the Tory leader Walter Butler.  John Ford’s brother Francis plays an aging scout captured by the Mohawks and torched in a wagon filled with straw.  There’s lots of Technicolor fire in the movie. 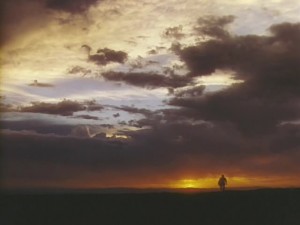 This film was a big success at the box office in Hollywood’s greatest year ever.  Ford had planned to spend three weeks in filming the Battle of Oriskany at great expense, but studio head Darryl Zanuck ordered him to find ways to cut the expense.  The battle and its results are narrated effectively by the wounded and delirious Gil as he receives medical care at the Widow McKlennar’s farm.  The screenwriter was Lamar Trotti, who also wrote the screenplays for Young Mr. Lincoln and The Ox-Bow Incident.  The film was nominated for Academy Awards for Best Supporting Actress for Edna May Oliver’s performance as the Widow McKlennar and for Best Cinematography.  Music is by Alfred Newman.  Filmed in Cook County, Pennsylvania, and even in southern Utah, but Monument Valley doesn’t show up. 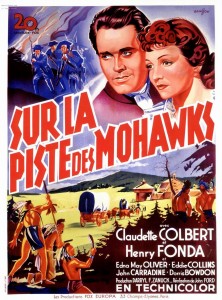 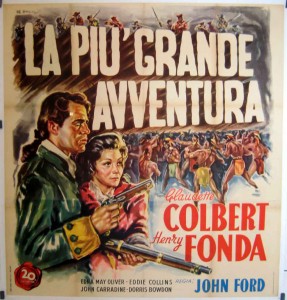 As with Gone With the Wind, 1939’s biggest movie, there are a few attitudes that can seem archaic to modern tastes.  Lana’s a little too hysterical initially for modern feminist sensibilities.  The Mohawks are faceless, menacing savages.  The alcoholic comic relief doesn’t play as well now as it did then.  And John Ford’s pre-World War II unquestioning patriotism is on display as the new nation is born at the end.  Still, it’s a mistake to expect a movie from 75 years ago to conform to more modern social attitudes.  On its own terms, it’s pretty good and eminently watchable.

The film’s sense of community among those living on the frontier, based around a church, is quite good.  The American Revolution has seldom worked well in movies, and this is one of the best of such films.  It would have been nice to have a little more background on the Mohawks and other Indians involved, as well as the enigimatic Tory Caldwell.  That wasn’t done much in 1939, and the movie budget and pacing probably wouldn’t have allowed for it anyway.  If you want more information on the actual history of this branch of the American Revolution in Iroquois country, see Glenn F. Williams’ Year of the Hangman:  George Washington’s Campaign Against the Iroquois (2006).  The title refers, a bit sensationally, to the year 1777, when the Battle of Oriskany took place and the 7s were thought to resemble gallows.  But the scope of the book is much broader than that.