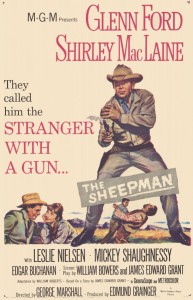 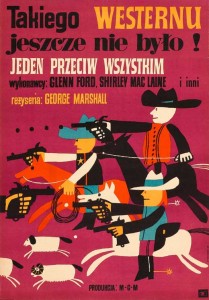 A congenial range war western, as the cattlemen in town try to cope with and drive out Jason Sweet (Glenn Ford), a newcomer-sheepman who’s good with a gun and has a sense of humor and his own way of going about things.  Not exactly a full-on satire like, say, Support Your Local Sheriff, it nevertheless has a well-developed sense of humor and a lot of satiric elements, especially in the first half.

Col. Stephen Bedford (Leslie Nielsen), now a respectable local cattle baron, is also the morally slippery Johnny Bledsoe from Sweet’s Texas past.  Sweet has won all these sheep in a card game in Denver and wants to graze them on common range. He begins by winning a fight he picks with the toughest man in town, the none-too-smart Jumbo McCall (Mickey Shaughnessy). 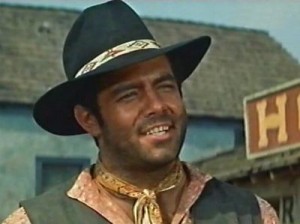 The conflicts here include not only the obvious cattle vs. sheep, but there are also the conflicted loyalties of Shirley MacLaine’s Dell Payton, who’s attracted to Sweet but all of whose other interests are on the side of the cattlemen.  She’s also engaged to Bedford.  She does participate in a plan to distract Sweet at a dance while his sheep are removed, which Sweet takes as a betrayal.  Sweet will obviously have to confront Bedford’s gunman Choctaw Neal and probably Bedford himself.  The question is less what will happen than how it will happen.

In addition to pitting two Canadian-born actors (Ford and Nielsen) against each other, Pernell Roberts is gunslinger Choctaw Neal, in his pre-Bonanza days (and a year before playing another more nuanced role as a quasi-heavy in Ride Lonesome).  The young Shirley MacLaine is excellent as the cattleman’s daughter/romantic interest in one of her two westerns (with Two Mules for Sister Sara).  Character actors Edgar Buchanan, Slim Pickens and Mickey Shaughnessy are also good in this one.  Pedro Gonzalez Gonzalez is good as Sweet’s head sheepherder, a year before playing a Mexican hotelier in Rio Bravo. 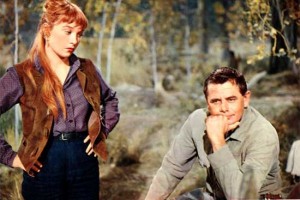 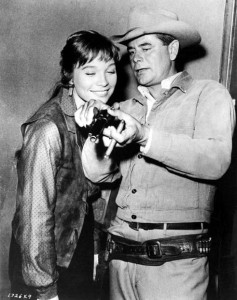 Altogether, a pretty good and quite watchable western, nicely paced.  It came out the same year as Cowboy, another seldom-seen but good Glenn Ford western.  It has good dialogue; William Bowers and James Edward Grant (a favorite writer of John Wayne’s) got an Oscar nomination for the screenplay.  It should be seen in several ways as a precursor of Support Your Local Sheriff.  It uses the phrase “town character” ten years before Support Your Local Sheriff (which was also written by William Bowers).  It’s one of several good George Marshall-Glenn Ford movies (comedies, some military like Advance to the Rear, Imitation General, It Started with a Kiss; The Gazebo), several of which were written by William Bowers, too.  George Marshall, director of the original Destry Rides Again and the less memorable 1954 remake with Audie Murphy, had a good touch with humor.  In color.