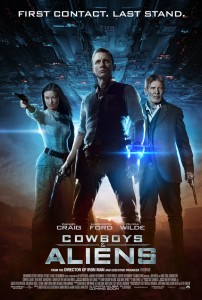 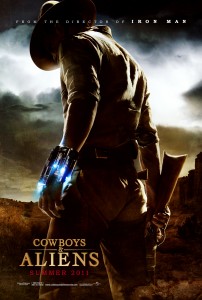 Somehow the ampersand (“&”) emphasizes the high-concept nature of how the seemingly-incompatible science fiction and western elements of this movie were all put together.  And it seems to downplay the fact that there’s an interesting story and some pretty good acting going on here.  Based on a 2006 graphic novel by Scott Mitchell Rosenberg, the title is pretty straightforward about going to the heart of what’s involved here.  But maybe it’s too simplistic, and it suggests a lightness of tone that isn’t present in the film.

It’s 1873 in the Arizona Territory desert.  A man (Daniel Craig) wakes up with no knowledge of who he is or how he got there, but he has a non-bullet wound in his side.  When three miscreants decide to rob him, he demonstrates a high level of skill with violence.  They donate clothes, a hat, mount and arms to him instead.  He rides off to find medical help for his wound, which he has no idea how he received.

In the tiny town of Absolution, he gets treated by Meacham (Clancy Brown), a local preacher/doctor.  As he goes out to get his bearings, he encounters young Percy Dolarhyde (Paul Dano), son of the local cattle baron, terrorizing the few inhabitants and shooting randomly, and makes short work of him.  Entering the saloon, he interests Ella Swenson (Olivia Wilde), who is drawn to the large high-tech bracelet he’s wearing.  Soon enough the sheriff (Keith Carradine) comes in with several deputies and suggests that the unknown man at the bar is in fact Jake Lonergan, a wanted outlaw and gang leader.  He successfully resists capture, expertly and without killing anybody, until Ella hits him over the head from behind. 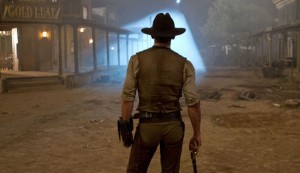 That evening, while Jake and Percy are loaded into a cage wagon for transport to the county seat, the town is attacked by flying vehicles that start to nab certain of the inhabitants, including the sheriff, Maria, wife of Doc the saloonkeeper, and Percy.  Jake’s bracelet comes to life and he blasts one of the vehicles with it, ending the attack.  Col. Woodrow Dolarhyde, Percy’s father, insists that Jake accompany them in pursuit of the invaders.  He goes his own way.

The next day Jake encounters a scruffy band of outlaws, who are apparently his former colleagues.  He reasserts his leadership by blasting with his bracelet the big ugly thug who has taken over in his absence.  Jake starts to have flashbacks involving a mystical hummingbird and a dark-haired young woman who resembles, but at the same time is clearly not, Ella.

As matters develop, the invaders are after the same thing as the outlaws:  gold, which may power their large ship, now mostly hidden in a canyon.  After a brief and unsuccessful daylight scrap with the aliens, the outlaws are ready to run for Mexico.  A band of Chiricahua Apaches are also searching for stolen loved ones.  And Jake and Ella take down one of the flying craft, at the cost of perhaps a mortal wound to Ella.

Taken to the Apache camp for whatever help she can get, Ella in fact regenerates and explains that she is not, strangely enough, from earth but is the last survivor of a planet devastated by these invaders.  She wants Jake’s help in stopping them, but he still can’t remember anything, until he takes an Indian potion.  Then he remembers (a) he and the young dark-haired woman were captured by the aliens, (b) how he got the wound in his side, (c) he escaped wearing the bracelet-weapon, and (d) the location of the alien ship in the canyon.

[Spoilers follow.]  Jake, Col. Dolarhyde and the Apaches put together an unlikely coalition of outlaws, Indians and the few remaining townsfolk to fight the aliens.  Jake and a few outlaws climb the outside of the ship and throw dynamite into the ship’s landing bay, provoking retaliatory attacks outside the ship, which is what they want.  While most fight the invaders, Jake and Ella sneak into the ship and find the chamber where the remaining captives are held.  The young dark-haired woman is not among them.  Jake and Ella release the captives and fight their way to the central core of the ship, where Ella takes the bracelet and goes to destroy the ship at its power source.  Jake is trapped by the alien who gave him his wound, until Dolarhyde helps him. 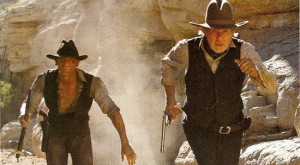 Finally, Arizona Territory (and, incidentally, earth) are saved from the alien menace.  The colonel forgives Jake for the previous theft of his gold, since more gold has been discovered in the fight and the railroad will be coming through and bringing yet more new gold.  Jake rides on, having lost two loves, gained a sense of community in Absolution and apparently but not certainly having mended at least some of his outlaw ways.

Daniel Craig is impressive as Jake Lonergan, just as he is as James Bond.  He works in the western setting, and one would like to see him in more westerns.  Olivia Wilde is very good as a sexy alien, in what may be her best performance to date.  Harrison Ford is appropriately gruff and domineering as Col. Woodrow Dolarhyde.  Many of the supporting roles are played very well by Paul Dano (the feckless Percy Dolarhyde), Sam Rockwell (saloonkeeper Doc), Clancy Brown (the Reverend Meachum), Adam Beach (Nat Colorado, Col. Dolarhyde’s Apache foster son), Walton Goggins (one of Jake’s outlaws), Noah Ringer (the sheriff’s grandson) and Raoul Trujillo (the Apache chief Black Knife). 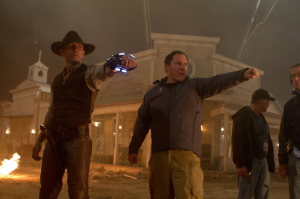 It is well known that this was a box-office disappointment, falling $34 million short of making back its production costs during its domestic theatrical run.  It has been less well known that this is a fun and enjoyable movie if accepted on its own terms, skillfully directed with a very good cast and an interesting, if not entirely believable or consistent, story to tell and many of the traditional trappings of western stories.  It has a high degree of re-watchability; the well-staged fights and action sequences hold up pretty well.  The ending seems to have contemplated the possibility of a sequel, but the poor box office returns make that unlikely.  Still, if you’re game for a decent supernatural western, you could do a lot worse.  As of March 2014, an extended cut of the film was released on DVD, if you want more of it.