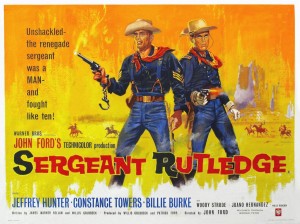 A late John Ford movie, a combination of a pretty good cavalry movie with a so-so courtroom drama.  Woody Strode is the eponymous sergeant in the 9th Cavalry, ex-slave and now buffalo soldier First Sergeant Braxton Rutledge.  Stationed at Fort Linton in Arizona Territory, he is accused of the murder of his commanding officer and the rape and murder of the officer’s daughter.  The story moves around in time, built around testimony at Rutledge’s court martial.  The prosecutor is Capt. Shattuck (a persnickety Carleton Young), sent from Gen. Nelson Miles’ headquarters for the assignment.  Defense counsel is the apparently overmatched Lt. Tom Cantrell (Jeffrey Hunter), who has long served with Rutledge and likes and admires him.

As the story develops, largely in flashbacks, Rutledge is wounded on the night of the killings and flees Fort Linton.  He thereafter kills several renegade Mescalero Apaches and saves Mary Beecher (Constance Towers) who has just returned from the east.  Rutledge is captured by Cantrell’s patrol, escapes custody and saves the patrol, only to be finally returned to Fort Linton as a prisoner.  His patent nobility is such we never think he actually did what he is accused of, and the eventual solution and confession seem to come out of nowhere—somewhat like that in Ford’s 1939 Young Mr. Lincoln. 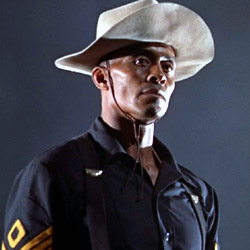 Woody Strode, always kind of a wooden actor more comfortable in a supporting role, gives his best performance here, and Hunter and Towers are fine, although we don’t really care much about their supposed romance.  Hunter doesn’t have a lot of acting heft, and Towers (previously used by Ford in The Horse Soldiers) seems like an actress from the 1930s.  The movie just seems to be lacking a bit in star power.  This was Billie Burke’s final movie, and, at 76, she plays the flibberty-gibbet wife of Col. Fosgate (Willis Bouchey, age 53).

This is one of Ford’s last movies, and it is not top-flight Ford—kind of like Two Rode Together and Cheyenne Autumn in that regard.  Still quite watchable, though.  It features Ford’s usual excellent use of Monument Valley.  Written by James Warner Bellah and Willis Goldbeck.  In color, even though Ford was still shooting some movies in black and white (e.g., The Man Who Shot Liberty Valance).  One looks in vain for John Wayne, James Stewart, Richard Widmark or somebody of similar stature. 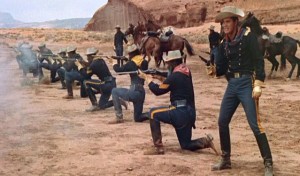 Jeffrey Hunter as Lt. Tom Cantrell, with his buffalo soldiers.