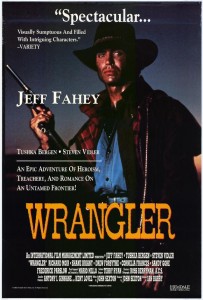 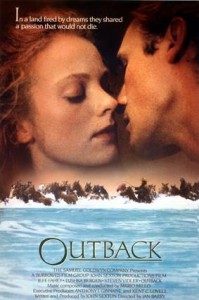 This slow-developing tale feels like it wanted to be a large-scale family saga, but the first hour of financial maneuvering and character development feels turgid and not entirely clear.  It didn’t have the budget, running time or editing to be a bigger story.  Set at the time of the Boer War in South Africa (ca. 1898), this is a low-profile Australian production with a largely Australian cast.

Tushka Bergen is Alice May Richards, a once proud but now financially beleaguered rancher left on her own when her father dies.  (She’s not entirely alone, but her mother and brother aren’t much help in trying to save the ranch.)  She has to ward off a takeover of the family ranch Minnamurra by Allenby (Shane Briant), a ruthless neighboring rancher.  With the help of two men who are romantically interested in her—American businessman Ben Creed (Jeff Fahey), who turns out to be good with guns, and illiterate but expert drover Jack Donaghue (Steven Vidler)—she stages a last-minute desperation drive to get her herd of horses to a port where Lord Kitchener is willing to buy them for a price that will save her ranch and, better yet, enter into a contract for many more horses, helping to insure the continuing survival of Minnamurra. 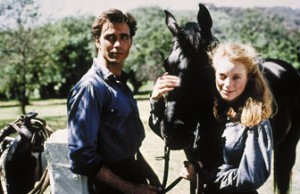 Creed and Alice May Richards.

Creed’s trading company has been ruined by sabotage that seems to point again to Allenby.  But the big rancher is willing to use violence to stop Alice in getting her horses to Kitchener.  Needless to say, the drive ends in triumph for Alice, and she chooses the faithful and heretofore underappreciated Creed.  Alllenby suffers no apparent punishment for his nefarious deeds other than losing his chance at Minnamurra and being dumped into a sack of grain when the horses run into the ship.

Jeff Fahey is the only member of the cast seen much in the US (e.g., as Brian Dennehy’s principal bad guy in Silverado), and he’s pretty good here.  Not released theatrically in the US.  Filmed in New South Wales.  Short, at 92 minutes.  Cinematographer Ross Berryman won an Australian award for this.  It’s better than one might have expected, but it would have been better yet if the story had focused more on the horses and less on the financial shenanigans.  Or if it had had enough time and tight enough editing to make the Allenby shenanigans clearer.

The main plot line is very similar to the first two-thirds of Baz Luhrman’s 2008 epic melodrama Australia.  For another story about a horse drive (this one from Oregon eastward across Idaho to north central Wyoming) to sell animals to the British for the Boer War, see Broken Trail (2006).  For another Australian horse film, see the better known The Man from Snowy River.