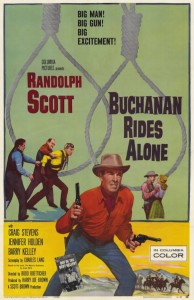 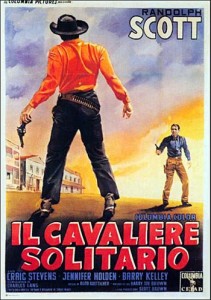 One of the Ranown westerns based in a town, like Decision at Sundown, instead of being shot out in the Lone Pine countryside.  Agry Town, on the California-Mexico border, is corrupt, like Sundown.  The genial Texan Buchanan rides in from Mexico and has trouble riding out.  The sheriff, the judge and the hotel keeper are all brothers named Agry, with a son of the judge as a short-lived trouble-maker.  That seems to make four Agrys.

In a saloon, Juan de la Vega (Manuel Rojas), a wealthy young Mexican seeking revenge, kills Roy Agry, son of Judge Simon Agry.  Buchanan helps him as the sheriff’s men proceed to beat him, and both land in jail, Buchanan with his $2000 from his years in Mexico confiscated. 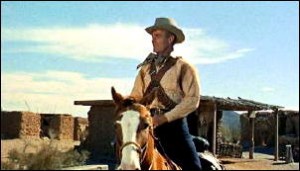 Buchanan:  “I’d like to give you what your boys gave me.”

Sheriff:  “Take the law into your own hands, is that it?”

As matters play out, Buchanan is sent out from town in the company of two deputies who obviously have instructions to kill him.  One of them, Pecos Hill, upon finding that Buchanan is a fellow West Texan, turns on the other and kills him.  Buchanan is released and they hold a non-stereotypical impromptu funeral for the deceased gunman.  Pecos has a speech in which he declares that his deceased friend was a cheater and a thief who couldn’t be trusted, but otherwise was not a bad guy. 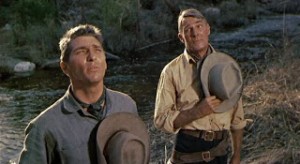 The three senior Agrys are all conspiring against each other.  Judge Simon is the most powerful, and has his own gunman, Abe Carbo (Craig Stevens).  Sheriff Lew Agry has several deputies.  And hotel keeper Amos Agry is playing one against the other for his own advantage.  Simon keeps trying to extract a $50,000 ransom from Juan’s family, while Luke wants to get the money and hang Juan, too.  Amos wants a cut of the money.  Juan escapes and is recaptured; Buchanan is released and recaptured.   After several reverses, all the players end up at the border scrabbling over the $50,000.  The Agrys are on the U.S. side, and Juan and Buchanan are on the Mexican side.  The money is on the bridge in the middle, and there is a stand-off.  Lew sends Simon to get the money and then shoots him while he’s on the bridge. Lew then gets shot in turn.  With the two effective Agrys dead, Buchanan gets most of his $2000 back and then hands the $50,000 to Juan and the town over to Carbo.

This is based on the 1956 novel The Name’s Buchanan by Jonas Ward.  The writing credit for this one is attributed to Charles Lang (as is Decision at Sundown), and Randolph Scott as Buchanan is talkier than in Burt Kennedy’s scripts, with more humor.  However, Boetticher later confirmed that he found the Lang script unsuitable and had Burt Kennedy re-write it.  Since Lang’s wife was gravely ill and they needed the money, Kennedy generously allowed the writing credit (and the fee) to stay with Lang.  Still, it’s not really Kennedy’s best work as a writer. 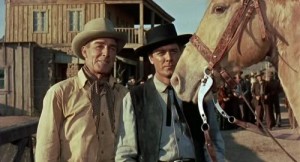 Interestingly enough, there is no significant female role in this film, not even for Karen Steele (the statuesque Mrs. Boetticher).  Television private eye Craig Stevens (“Peter Gunn”) plays Carbo, Simon’s hired gunman who always rides in a carriage.  Stevens gets second billing, but his character isn’t very developed.  There is an early screen appearance by L.Q. Jones as the chatty young Texan Pecos Hill.

This is not one of the more highly-regarded Boetticher-Scott efforts, but it’s enjoyable enough to watch.  Cinematography is in color by Lucien Ballard.  Like all the other Ranown westerns, this is fairly short, at 78 minutes.  Filmed in Old Tucson-Sabino Canyon, in Arizona, not at Lone Pine like most of the other Ranown series.  So, although it’s the only one of the Ranown films to be set in California, it’s the only one not to be filmed in California.  Director Taylor Hackford has commented that Scott’s Buchanan is a sort of precursor to Clint Eastwood’s Man With No Name, the character at the center of Sergio Leone’s influential Dollar movies. .