NY Times, by Dave Kehr, Sept. 8, 2008.  Written on the occasion of the release of the restored version of the movie on DVD. 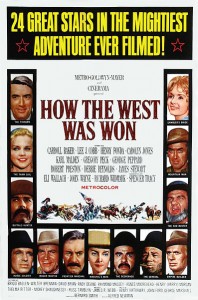 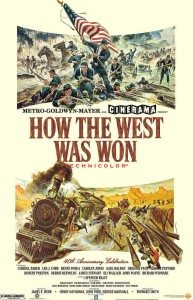 The first Cinerama features were travelogues, transporting 1950s spectators to parts of the world most would never see.  (Many of the earliest Edison and Lumière films, at the turn of the 20th century, fulfilled a similar function.)  Released in the United States in 1963, How the West Was Won would be the first — and, as it turned out, the last — narrative film to be shot in the three-strip Cinerama process.

In a sense the film’s guiding aesthetic is still that of the travelogue, but instead of visiting various scenic locations, it makes brief stops at most of the symbolic locations of the western genre, from the embarkation points of the Erie Canal to the California mountains of the Gold Rush.

The script, by James R. Webb (Vera Cruz), does its best to touch all the thematic bases of the genre too:  the male characters include a mountain man (James Stewart) and a river pirate (Walter Brennan); a wagon master (Robert Preston) and a riverboat gambler (Gregory Peck); a builder of railroads (Richard Widmark) and a frontier marshal (George Peppard).  The main female characters are even more broadly archetypal: a pair of sisters, portentously named Lilith (Debbie Reynolds, who becomes a saloon singer and budding capitalist) and Eve (Carroll Baker, who stakes out a farm on a Mississippi riverbank and mothers two boys).

As a dramatic narrative How the West Was Won doesn’t work all that well.  Few of the characters are on screen long enough to establish identities beyond those of the stars who play them.  Most of the episodes are thinly developed, and over all the film has a jerky, stop-and-start rhythm, perhaps because it is the work of three different directors.

Henry Hathaway (True Grit) reportedly was in charge of the project and directed three episodes (“The Rivers,” “The Plains” and “The Outlaws”).  John Ford directed one (“The Civil War”), and George Marshall another (“The Railroad,” although Hathaway later said he had to reshoot much of Marshall’s material).

Instead this is a movie of visual epiphanies, ingeniously realized in the face of crippling stylistic challenges.  The Cinerama camera — an 800-pound behemoth that resembled a steel-girded jukebox — could move forward and backward with ease and elegance, resulting in some of the most impressive moments in the film (like the long tracking shot through a river town that opens “The Rivers”).  But it couldn’t pan from side to side without creating registration problems, and close-ups were all but impossible to achieve with the system’s short 27-millimeter lenses.

Moreover, characters couldn’t move freely across the wide screen, because crossing the two join lines — where the images overlapped — would create a distracting jump, and the action (beyond the broad movements of rushing trains or stampeding buffalo) had to be restricted to the center of the screen.

Hathaway and Marshall are resourceful and craftsmanlike in dealing with these limitations, finding ways to position the actors so that the join lines are hidden, or filling the unused space beyond the center frame with vertiginously detailed landscapes that fall off into infinite distance.

But it is John Ford who rises to the challenge most poetically, chiefly by ignoring it.  “The Civil War” is an exquisite miniature (unfortunately padded out by some battle sequences lifted from Raintree County, an earlier MGM Civil War film) that consists of only three scenes: a mother (Ms. Baker) sends a son (Peppard) off to war; the son has a horrible experience as night falls on the battlefield of Shiloh; the son returns and finds that his mother has died.  The structure has a musical alternation: day, night, day; exterior, interior, exterior; stillness, movement, stillness. 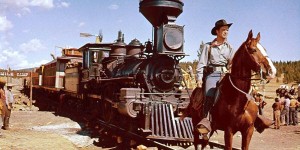 In the first and last scenes the famous Fordian horizon line extends the entire length of the extra-wide Cinerama frame.  In the aftermath of the battle the horizon line disappears in darkened studio sets.  The sense of the sequence is profoundly antiwar — Generals Sherman and Grant, played by John Wayne and Henry Morgan, briefly appear as a couple of disheveled, self-pitying drunks — and it gradually becomes apparent that the elderly Ford is revisiting one of his early important works, the 1928 drama Four Sons.

The expressionistic middle sequence, with its studio-built swamp, refers to F. W. Murnau, whose Sunrise was one of the great influences on the young Ford, while the open-air sequences that bracket it, with their unmoving camera, long-shot compositions and rootedness in the rural landscape, recall the work of the American pioneer D. W. Griffith.

When, in the final panel of Ford’s triptych, a gust of wind tousles Peppard’s hair in the foreground and then continues across to the forest in the middle distance and on to the stand of trees in the most distant background, it seems like a true miracle of the movies: a breath of life, moving over the face of the earth.  No less formidable a filmmaker than Jean-Marie Straub has called “The Civil War” John Ford’s masterpiece; for the first time, thanks to this magnificent new edition, I think I know what he’s talking about. Birth, death, rebirth. 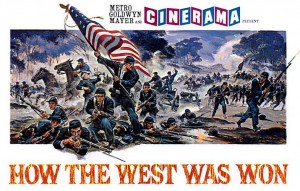 Note:  This epic of the west is long, at 164 minutes.  Voice-over narration is by Spencer Tracy.  Music was by Alfred Newman.  In addition to this piece, Dave Kehr was the writer of a 2005 documentary on director Budd Boetticher entitled Budd Boetticher:  A Man Can Do That.  After fourteen years of writing a column for the New York Times on new DVD releases, of which this was one, he now works as a film curator for the MoMA in New York.