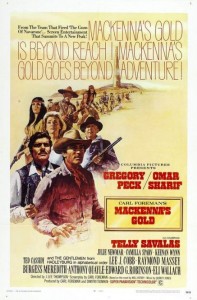 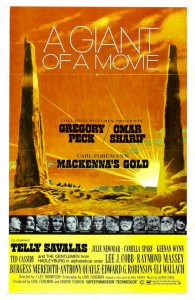 In this big-budget effort set in 1874, Mackenna (Gregory Peck), a former prospector in Apache country, is now the local marshal, with only iffy support in his community.  His primary supporter has been Judge Bergmann.  Bergmann is killed early in the movie by John Colorado (the miscast Omar Sharif, who might look sort of Mexican but doesn’t sound it, at the peak of his American film career after Dr. Zhivago and Funny Girl).  Colorado and his gang, after killing Bergmann, abduct his daughter Inga (Swedish actress Camilla Sparv, who sounds European).

Mackenna is shot at in the desert by an old Indian, who has a treasure map to the lost Adams gold.  Mackenna looks at the map, doesn’t believe it and destroys it.  Turns out the old Indian was being tracked by Colorado, who is looking for the gold and now has Mackenna as a prisoner.  He stays to try to rescue Inga.  The group includes several Indians, including Hesh-Ke (Julie Newmar), with whom Mackenna has a past history but no current interest.  She does have current interest, though. 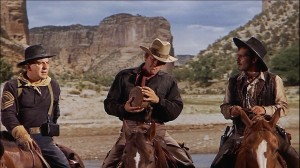 The large cast includes a number of actors at the ends of their careers in bit parts as townspeople also searching for the gold; they’re not managed well, and none of them matter much.  Telly Savalas is a corrupt cavalry sergeant who kills his own men and wants in on the gold.

Of course, there does turn out to be gold in the fabled Canon del Oro, which is protected both by Indians and by mystical natural forces.  At the end, all the seekers are killed except for Mackenna and Inga in a cataclysm featuring skinny-dipping near the gold deposit, earthquake, toppling geological formations, battles with Indians and betrayals within the group. 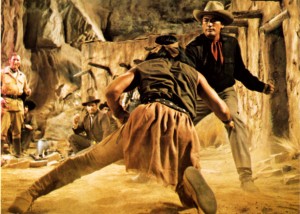 Shot in color in Utah and Arizona.  Narration is by Victor Jory.  A troubled production, with rambling story, and some technical problems in the filmmaking.  Kind of campy-seeming now.  Director J. Lee Thompson had a hot streak in the early 1960s with mainstream movies such as The Guns of Navarone, Cape Fear and Taras Bulba but was fading by the time he made this.  The movie is said to have been intended for a running time of three hours, but was cut back by the studio to two.  Not much seen these days.  Compare the story with 1949’s Lust for Gold, featuring Glenn Ford, and with The Walking Hills, also from 1949, with Randolph Scott and John Ireland.  In color.  Score by Quincy Jones; theme song sung by Jose Feliciano.

Upon later reflection, star Gregory Peck said “Mackenna’s Gold was a terrible western.  Just wretched.”  He should have been in a good position to judge, having starred twenty years earlier in David O. Selznick’s overheated epic turkey Duel in the Sun, referred to by some critics as Lust in the Dust.  Perhaps by the time of his comment he wished that he had joined Steve McQueen and Clint Eastwood in turning down the lead in Mackenna’s Gold. 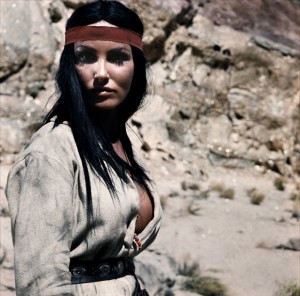 Mackenna’s Gold was not a box office success in the U.S. (where it returned only $3 million on its then-substantial production costs of $14 million ), but it did better overseas.  In India, strangely enough, it remained the top Hollywood grosser in history until blockbusters like Jurassic Park and Titanic came along.  Even worldwide hits such as Jaws and Star Wars would not make as much money in India as Mackenna’s Gold did.  The film went through countless re-runs until well into the 1980s and could be seen in cinema halls across India, including small venues in the medium-size towns of North India. [http://indianquarterly.com/old-is-not-just-gold-its-mackennas-gold/]