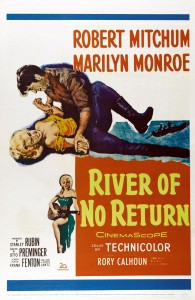 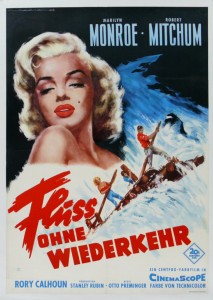 Reportedly, neither Marilyn Monroe nor director Otto Preminger wanted to make this movie; they were forced to do so because of contractual obligations.  Both were said to have reservations about the script, and they didn’t get along with each other much, either.

In 1875 Matt Calder (Robert Mitchum) has sent for his ten-year-old son Mark (Tommy Rettig) to live with him on a remote homestead on Idaho’s River of No Return after the boy’s mother dies.  While waiting in a mining camp for his father, Mark makes the acquaintance of dance hall girl Kay (Marilyn Monroe).  Once back on their farm, gambler Harry Weston (Rory Calhoun) and his “wife” Kay are on a raft headed downriver to file a gold claim in Council City but are marooned at the Calder place.  When Matt declines to lend Weston his rifle and horse, Weston knocks Calder out and takes them, leaving Kay behind.

Calder worries about hostile Indians (of unspecified tribe, but one supposes that in 1875 they’d be Nez Perces or Northern Paiutes, maybe Bannocks) without the rifle, and they show up.  In desperation, Calder, Mark and Kay are forced to take the raft downriver, although there is little hope they can get through the rapids in the 15 miles to Council City.  The Indians burn the Calder cabin as the trio heads downstream.  Starvation becomes a problem, as they exist on berries and what few fish they can spear.  Finally, they catch an elk in the river, but the roasting meat attracts a mountain lion.  Calder attacks Kay, and the the lion attacks Calder.  He is saved when the lion is killed by a couple of hunters, one of whom turns out to be Colby, the person from whom the gambler Weston won his gold claim.  He’s determined to get it back and coarsely comes on to Kay.  Calder is up and down in his relationship with Kay; mostly he’s suspicious of her because of her association with Weston.

They spar verbally, with Kay saying she knows that Calder’s wife died while he was in jail for shooting somebody in the back.  For his part, Calder treats Kay like a dance hall girl.  It turns out Weston and Kay haven’t yet been married.  Calder drives off Colby and keeps his rifle and ammunition belt.  The next day as they head downriver again, the Indians find them just before they get to the rapids.  Calder drops several of them but runs out of ammunition.  Two of their Indian attackers make it to the raft, and Calder has to fight them off just as they reach the rapids.

They shoot the canyon, although Calder falls off and only stays with them by hanging on to the steering rudder.  Just before they get to Council City, Kay makes Calder promise to let her talk with Weston first to avoid violence.  Reluctantly Calder agrees, and he and Mark go off to the general store.  Kay explains things to Weston, but he responds by taking out his gun and shooting Calder as he walks out of the store.  With Calder down, Weston heads for him, obviously planning to finish him off.  Just as he aims his gun to do so, Mark in the store at the rifle rack shoots him in the back. 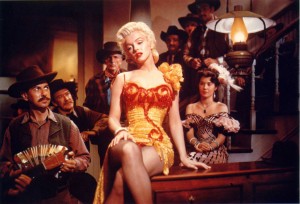 Kay takes her red shoes (symbols of her former life and unsavory career) to the local saloon and resumes that career there.  The Calders get a horse, wagon and supplies.  In the final scene, Kay wistfully sings (dubbed by Gloria Wood) “The River of No Return.”  As she finishes to enthusiastic applause, she smiles ruefully.  Calder walks through the door and carries her out over his shoulder.  “Where are you taking me?” she says in presumed outrage.  “Home,” he replies.  As the wagon heads out of town, she throws the red shoes in the dust, much like Will Kane’s badge at the end of High Noon.

Despite any reservations Monroe and Preminger may have had about the script, this did well at the box office.  The movie is watchable, but Monroe’s not a natural in westerns.  She’s all right in this, if a bit distracting.  It was said that during the shooting Preminger and Monroe stopped speaking to each other and would only communicate through Mitchum, who had known Marilyn a long time.  Mitchum was quite at home in westerns, and Rettig went on to star in Delmer Daves’ The Last Wagon and in a television series with Lassie.  Rory Calhoun is in his slick and sleazy bad guy mode, as in The Spoilers.  He’s not on screen all that much. 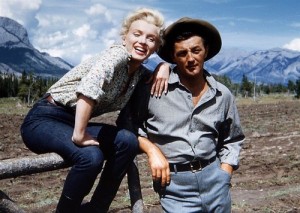 In color, filmed in Banff and Jasper, Alberta, in Cinemascope and 3D.  When Preminger was not available for some reshoots, Jean Negulesco directed those.  It’s not very long at 91 minutes.  Preminger did not consider this one of his best.