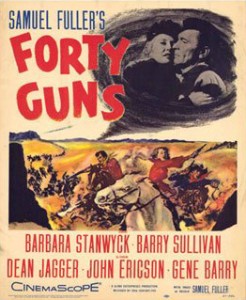 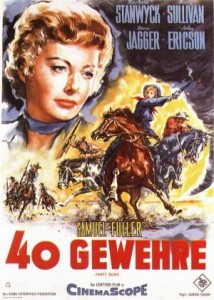 The forty guns referred to in the title are employees of the boss of the range, Jessica Drummond (Barbarbara Stanwyck) in Cochise County, Arizona, in this Earpian-cattle queen melodrama.  U.S. marshal Griff Bonnell (Barry Sullivan) comes to town with two of his brothers, with a warrant for one of those employees.

Drummond has run things pretty much as she pleased, with her private army and the local sheriff Ned Logan (Dean Jagger) in her pocket.  Her wild younger brother Brockie (John Ericson) has a tendency to drink too much and to father illegitimate children, whose mothers Drummond then has to pay off.  The Bonnell brothers are bathing when Brockie and his friends shoot up the town, including shooting the elderly near-blind town marshal (Hank Worden).  After some entreaties, oldest brother Griff (Barry Sullivan) tackles Brockie and arrests him.  The corrupt sheriff then lets him go with no consequences. 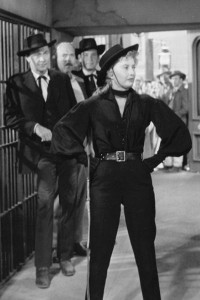 Getting the brother out of jail.

Griff serves his warrant at the Drummond ranch and meets Jessica.  She seems intrigued by him.  Bonnell brother Whit (Gene Barry) meets the local female gunsmith and is taken with her.  Griff keeps trying to send youngest brother Chico (Robert Dix) off to California, but he resists because he wants to join the family business.

The man Griff arrested is shot in jail, and Griff looks for the shooter.  He develops more of a relationship with Jessica, while Ned Logan sets up a trap for Griff with the supposed shooter as bait.  When Griff walks into the trap, Chico gets the shooter who would have shot Griff.  Brockie goes crazy, displaying the corpse of the shooter at the local undertaking establishment.  Griff and Jessica deepen their relationship while all this trouble also gets deeper.  She fires Sheriff Logan, who hangs himself in despair at being cut out of Jessica’s life. 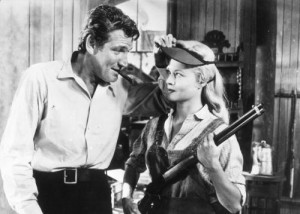 Whit and the gunsmith.

On the day of Whit’s wedding to the lady gunsmith, Brockie tries to kill Griff from afar with a rifle and kills Whit instead.  Jessica pays for his legal defense and bribes judges, but he’s convicted and she refuses to help him escape.  Her empire, based on bribery and other sorts of crime, is falling apart around her ears, while she tries to do the right thing and square herself with Griff.  Brockie breaks out and uses Jessica as a hostage/shield.  Griff shoots Jessica non-fatally and then empties his gun into Brockie when he drops her.  Chico takes Whit’s position as the town marshal, and Griff heads off to California in his two-seater buggy.  Around the end credits we can see a distant shot of Jessica running up the dirt street after Griff and catching up to him at the fade-out.  Presumably they make up and live happily ever after, rebuilding Jessica’s empire.

The Earp connection is made overt by having this take place in Tombstone, in Cochise County, Arizona, and by having the Bonnell brothers’ father named Nicholas (also the name of the Earps’ father).  It has some heavy-breathing passion, some apparent double entendres and some noir touches.  A good, watchable movie, with a fair amount of talking for a western.  The title song “High-Ridin’ Woman With a Whip” is reprised a couple of times.  Some of the interior scenes at the Drummond ranch are apparently shot in the remodeled set for Tara from Gone With the Wind.  Filmed in black and white; not a long movie, at around 80 minutes.  This has become a modest cult favorite, with some similarities to Johnny Guitar.  Stanwyck and Barry Sullivan also starred together in The Maverick Queen.