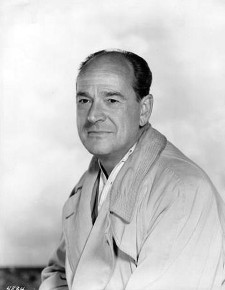 “He was less reckless than Sam Fuller, less passionate than Nicholas Ray, yet in the framework of the Western he hit on an almost perfect form with more consistency than either of his peers—and fueled it with pain.” – Tom Charity, The Rough Guide to Film, 2007.

Anthony Mann was born in 1906 in San Diego with the name Emil Anton Bundesmann, to an Austrian Catholic father and a Jewish Bavarian mother.  He was only 60 when he died of a heart attack in Berlin in 1967 while filming A Dandy in Aspic.

He started out as an actor, appearing in plays off Broadway in New York City, moving into directing.  Among many others he worked with the young James Stewart during the 1930s.  In 1938 he moved to Hollywood and joined the Selznick organization as a casting director and talent scout.  In 1942 he became an assistant director and moved into directing low-budget crime films for RKO and Republic.  During the 1940s he was known principally as a director of films noirs. 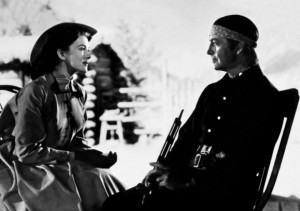 His first western was Devil’s Doorway in 1950, which showed both the social concerns and the interest in the psychological roots of action and violence that had marked his earlier work.  The noir sensibility had already been evident in such westerns by other directors as Yellow Sky and Blood on the Moon from the late 1940s, but it was strongly present in Mann’s work in westerns as well.  The same year he directed the family saga-range melodrama The Furies as well.  For Mann, westerns were his opening to becoming a front-rank director.  His westerns were commercially successful, and he became known as the father of the psychological western.  And James Stewart re-invigorated his career through his work with Mann and with Alfred Hitchcock in the 1950s.

His first major production was Winchester ’73 in 1950; he was recommended as a director by James Stewart, with whom he had worked in the 1930s.  The partnership was very successful.  In addition to the five westerns they made together in the early 1950s, they also made The Glenn Miller Story and Strategic Air Command.  Mann and Stewart are linked together in cinematic history as much as John Ford and John Wayne.  The two had a falling-out over Night Passage in 1957, Mann left the production, and the two never worked together again.  Mann was the initial director of Spartacus but left after disagreements with the star-producer Kirk Douglas, to be replaced by the more amenable Stanley Kubrick. 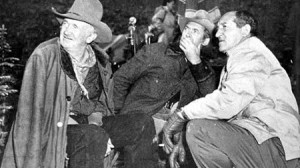 Even without the collaboration with Stewart, Mann continued to make good westerns in the 1950s:  The Last Frontier with Victor Mature, The Tin Star with Anthony Perkins and Henry Fonda, and Man of the West with Gary Cooper.  About 1960, he increasingly moved toward historical epics, such as the remake of Cimarron, El Cid and The Fall of the Roman Empire—a long way from the films noirs in which he made his initial reputation and the westerns with a psychological edge that made him a front-rank director. 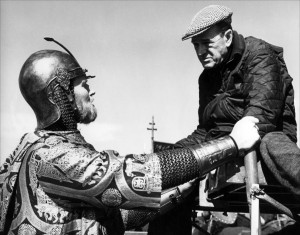 In retrospect, his directorial career seems to divide neatly into three parts. “Though he incidentally directed films in various genres (the musical, the war movie, the spy drama), Anthony Mann’s career falls into three clearly marked phases:  the early period of low-budget, B-feature films noir; the central, most celebrated period of westerns, mostly with James Stewart; and his involvement in the epic (with Samuel Bronston as producer).   All three periods produced distinguished work, but it is the body of work from the middle period in which Mann’s achievement is most consistent and on which his reputation largely depends.” – Robin Wood, International Dictionary of Films and Filmmakers, 1991. 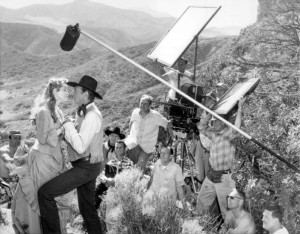 Shooting Julie London and Gary Cooper in Man of the West, 1958.

Mann Essentials:  Winchester ’73, Bend of the River, The Naked Spur, The Far Country, The Man from Laramie, The Tin Star, Man of the West.