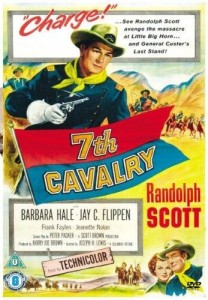 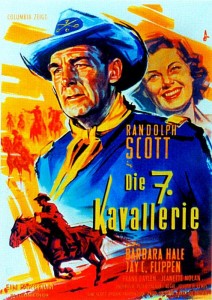 The producer on the credits is Harry Joe Brown, Randolph Scott’s partner in Ranown, the production company that produced most of Budd Beotticher’s westerns with Randolph Scott.  And this appears to be a Scott-Brown production.

It’s not as good as the best Boetticher stuff.  This cavalry movie stars Scott as Captain Tom Benson, first seen approaching Fort Abraham Lincoln in Dakota Territory with his fiancée Martha Kellogg (Barbara Hale) to find nobody there.  The 7th Cavalry, which had been based there, has now been mostly destroyed by the Sioux-Cheyenne allies at the Little Bighorn, and the few survivors straggle in as Benson watches.  The survivors and others blame Benson for cowardice, not realizing or not believing that Custer ordered him to go get his bride.  That includes her father, General Kellogg, who never liked Benson anyway and is at Fort Lincoln conducting hearings on what happened. 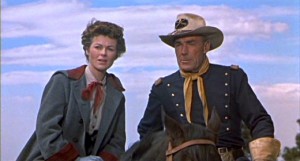 Benson, a former gambler and faro dealer, was close friends with Custer and resists versions of the events that would impute bad judgment to Custer.  With his military career and his marriage in question now, Benson leads a detail of prisoners from the guardhouse on a mission to retrieve the bodies of the officers.  It’s dangerous because the Sioux hold the ground and now believe it to hold big medicine for them.  Benson has fights on his hands with a couple of his men, and insubordination from others.

They make it to the battlefield site and begin to collect remains.  The Sioux appear and make it clear that they do not intend for Custer’s remains to be taken, and they surround the small detail.  Cpl. Morrison (Harry Carey, Jr.) rides into Fort Lincoln and talks to Martha, telling her he was standing beside Custer when he ordered Benson to retrieve her instead of going to Little Bighorn.  He then rides out after Benson’s detail, riding Custer’s second horse, Dandy. 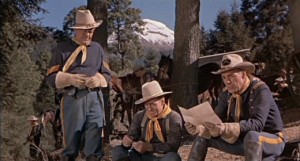 Almost to the battlefield, Morrison is shot off his horse by an Indian.  Riderless, Dandy makes his way to Benson’s beleaguered body collection detail.  The bugler sounds charge, and Dandy charges in.  The Sioux recognize Custer’s horse and take that as a sign that the detail is to be allowed to depart.  Apparently Morrison’s news about Custer’s order has changed Gen. Kellogg’s view of Benson, and everything is fine now back at the fort.

This takes the old school view of Custer as a gallant soldier.  Within ten or fifteen years, the revisionist view of Custer as a foolhardy glory hound would be more common, fueled in part by disillusionment with the Vietnam-era military.  Randolph Scott is fine, with excellent military bearing, although he seems a bit old for Barbara Hale, since he was nearing 60.  She is also fine, although there is nothing remarkable in her part.  The movie is short, at around 75 minutes, which doesn’t give enough time to answer all the questions that arise in the course of the story.  Based on a short story by Glendon Swarthout.  In color. 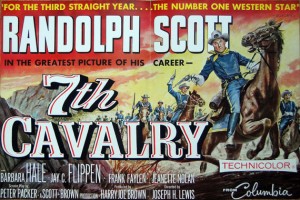