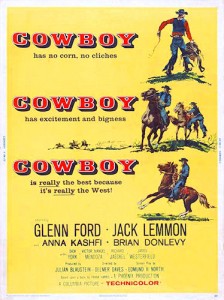 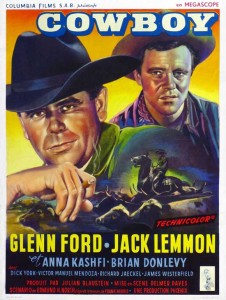 Tom Reese:  “And all that hogwash about horses!  The loyalty of the horse!  The intelligence of the horse!  The intelligence?  You know a horse has a brain just about the size of a walnut.  They’re mean, they’re treacherous and they’re stupid.  There isn’t a horse born that had enough sense to move away from a hot fire.  No sensible man loves a horse.  He tolerates the filthy animal only because riding is better than walking.”

This is a standard tenderfoot-and-cattle drive story with a good cast.  Hard-bitten Tom Reese (Glenn Ford, at the peak of his career as a leading man) is a cattleman who buys his cattle in Mexico (Guadalupe, on the trip in this movie), drives them north to Wichita to the railroad and then sells them in Chicago. 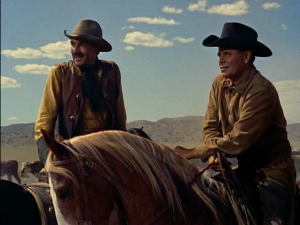 Mendoza and Reese on the trail.

As the movie opens, Reese and his men are arriving at a luxurious Chicago hotel to spend a week or more enjoying the cash from the most recent sale.  Frank Harris (Jack Lemmon, just entering his period as a major leading man) is a night clerk at the hotel and harbors romantic notions of the cowboy life, in addition to an infatuation with the daughter of the major Mexican cattleman in Guadalupe.  In a hard night of gambling, Reese loses more money than he expected to and borrows Harris’ bankroll of $3800, agreeing to make Harris his partner in the next cattle drive.  The next morning when Reese tries to return the money, Harris is adamant that he wants to stick with the deal for partnership and has quit his job at the hotel.

There are the usual cattle drive episodes:  the stampede, snakes, raiding Comanches (meaning this had to be before 1876 or so, when Comanches were put on a reservation in Oklahoma), fights in bars, tenderfoot riding the wild bronc and such.  Harris is the tenderfoot in question, and he grows in both trail skills and responsibility, as he and Reese have a falling-out over how to handle the men, and Reese is badly wounded by the Comanches.  It turns out the young Mexican woman is now the wife in a marriage arranged by her parents, devastating Harris.  By the time they return to Chicago with the cattle, Reese and Harris have established a mutual respect and perhaps a continuing partnership. 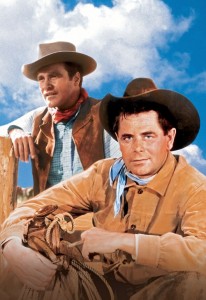 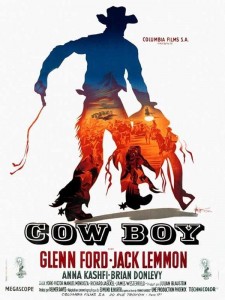 The supporting actors here are good, particularly Brian Donlevy in one of his last screen roles.  Donlevy plays Doc Bender, an aging former marshal of Wichita and gunhand trying to figure out where he fits into the increasingly civilized west and what his connections are while he makes a few bucks as a cowboy.  Strother Martin and Richard Jaeckel are also good as trail hands, and Victor Manuel Mendoza as Mendoza, the segundo to Reese.  While Ford is a natural in westerns, Lemmon isn’t, although he’s fine in the tenderfoot role.

This film looks good, bigger than most of Daves’ work.  It seems short, at around 90 minutes, with the wrapup and re-establishment of the relationship between Reese and Harris particularly abrupt.  Worth watching but not as memorable as it may seem at first.  In color, shot in New Mexico.