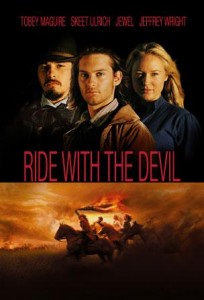 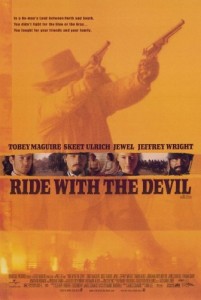 “On the western frontier of Missouri, the American Civil War was fought not by armies, but by neighbors.  Informal gangs of local southern Bushwhackers fought a bloody and desperate guerrilla war against the occupying Union Army and pro-Union Jayhawkers.  Allegiance to either side was dangerous.  But it was more dangerous still to find oneself caught in the middle.”  [Title card]

Strictly speaking this is a Civil War movie, more than a western.  But it takes place on the frontiers of American civilization, on the Missouri-Kansas borders where the war took place less formally but perhaps more viciously than it did in the east.  This superb film has a large and excellent cast, and it plays on the humanity and diversity of the participants more than on doctrinal correctness of the Union or the moral corruption of the Confederacy and slavery. 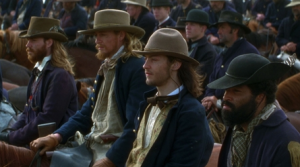 At one point they have captured four Union soldiers, including Alf Bowden (Mark Ruffalo), whom Jake knows.  He is instrumental in showing Alf mercy and getting him released to carry a message.  Pitt insists that Jake, who, unlike most of his compatriots is literate, read a captured Union letter, which turns out to be from a Wisconsin mother to her son in the army.  Most of the bushwhackers respond to the humanity of a mother’s concern for her son and the earthy issues related to farming in Wisconsin.  Jake is later told that Alf Bowden sought out Jake’s father and brutally killed him.

Mr. Evans (Zach Grenier), speaking of Lawrence, Kansas, and the abolitionists there :  “…My point is merely that they rounded every pup up into that schoolhouse because they fancied that everyone should think and talk the same free-thinkin’  way they do with no regard to station, custom, propriety.  And that is why they will win.  Because they believe everyone should live and think just like them.  And we shall lose because we don’t care one way or another how they live.  We just worry about ourselves.”

Jack Bull Chiles (Skeet Ulrich):  “Are you sayin’, sir, that we fight for nothin’?” 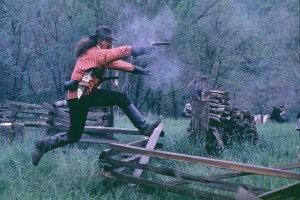 A few of the bushwhackers hide out for the winter in a dugout near the Evans place, and Jack Bull strikes up a relationship with Sue Lee, an Evans daughter who was married for only three weeks before being widowed.  One night the Federals attack the Evans home and kill Mr. Evans (Zach Grenier); while riding to offer what help they can, Jack Bull is wounded in the arm.  Gangrene sets in, he dies, and Jake and Holt deliver Sue Lee to the sympathetic household of Orton Brown and his wife (Tom Wilkinson and Margo Martindale).

The next summer all of the Confederate bushwhacker bands are united by the charismatic William Quantrill (John Ales) to attack Lawrence, Kansas, a center of abolition and pro-Union sentiment.  In the notorious attack in August 1863, men are slaughtered indiscriminately, but Jake and Holt prevent Pitt from killing a family who is feeding them.  There are those (Pitt, Black John) who do not find Jake brutal enough; there are others, like George Clyde, who sympathize with him.  In the retreat, fending off Union soldiers, George Clyde is killed and Jake and Holt are wounded.  They make it to the Brown household to recuperate.

Pitt Mackeson (Jonathan Rhys Meyers):  “Why, you little Dutch son of a bitch. You do what I tell you or I’ll kill you.”

Jake (Tobey Maguire) [pulls his gun a few inches from Pitt’s face]:  “And when do you figure to do this mean thing to me, Mackeson?  Is this very moment convenient for you?  It is for me.”

As they recuperate, Jake and Holt become aware that the Browns and others think Sue Lee’s baby Grace is Jake’s, rather than the product of a one-night stand between Jack Bull and Sue Lee.  Jake, who is resistant to the idea of marriage, is nevertheless pushed into marrying Sue Lee as the end of the war approaches.  At the age of 19, he has killed fifteen men but never made love to a woman.  He cuts his long hair (“Goodbye, bushwhacker curls,” he says) and shaves off his beard, symbolic of leaving the old life behind and taking on new responsibilities.  He thinks of taking Sue Lee and Grace to California; Holt thinks of going to Texas to look for his mother, who was sold there before the war.  And they hear stories that Pitt Mackeson has formed a group of former-bushwhacker outlaws who rob from and kill Union and Confederate sympathizers alike. 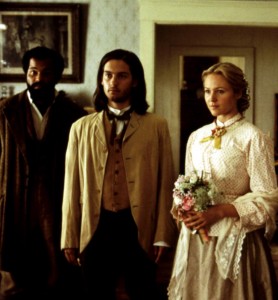 As Jake and his family and Holt move toward western Missouri, they encounter Pitt and one of his men, and there is a tense standoff.  But Pitt moves on to the town of Newport, where a Union force is stationed.  The parting between Jake and Holt is drawn out, mostly wordless and very touching.

In addition to the acting, the film is notable for (a) its superbly staged action sequences, including battle and raids, without resorting to slow motion; (b) attention to period detail in language and in production design, especially costumes and weaponry; and (c) brilliant and beautiful cinematography by Frederick Elmes.  The excellent screenplay is by John Schamus, a frequent Ang Lee collaborator, based on Daniel Woodrell’s novel Woe to Live On.  Music is by Mychael Danna.  It was shot on location in Missouri and Kansas.

It’s not a perfect film; it’s a bit long at 140 minutes.  (As of 2010, there is now a director’s cut that is ten minutes longer, available on a Criterion Collection DVD.)  While some find that it drags in places, others think the developing relationships when there is less overt action on the screen are fascinating.  The singer Jewel is adequate as Sue Lee, but a better actress could have turned in a stronger performance.  If you give it the time, the film communicates the pain of wounds treated under primitive conditions, for example, and the continuing discomforts of a life lived out of doors.  It’s rated R for graphic war violence.

What makes this film unique in its story is not that it takes place among the Missouri bushwhackers, but that it carefully delineates their different personalities and motivations.  They don’t all believe the same way or in the same things, and they are not automatically despicable because they are Confederates.  Daniel Holt (Jeffrey Wright), as a black man fighting for the south because of his devotion to the man who freed him, is fascinating, as is the relationship that develops between Jacob and Holt as the others they are close to are killed and each comes to understand and like some one who is very different from himself.  There are no scenes of men singing or whistling “Dixie” or praising Robert E. Lee or slavery.  There are those who find that it is insufficiently condemnatory of the South and slavery, but that’s not really the point of the movie. 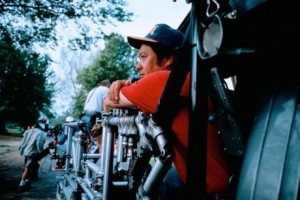 Hal Herring in Field & Stream particularly liked the accurate depiction of 1860s battle.  “The Missouri Border Wars were the historical highwater mark of handgun combat.  Rifles were single shots, shotguns could be fired at most twice, but a Colt 1851 carried six rounds, and with six Colts, carried in special holsters and configurations on the body, a man on a fast and steady war horse could inflict fantastic levels of damage on an enemy that planned to fight a conventional battle.  Ride with the Devil contains some of the best renditions of 1860’s era combat in any film.”

Philip French of The Guardian called this “a masterpiece that is also one of the finest films touching on the Civil War.”  He puts it as one of the ten best westerns ever made, but then he also includes Heaven’s Gate on that list.  It is likely one of the seven best Civil War movies (so far), along with:

If you were a film historian, you’d want to include D.W. Griffiths’ 1915 silent classic Birth of a Nation (made when the war was still within living memory) on the list, but it isn’t actually watched much these days, and its southern point of view is repugnant to many.  Ronald Reagan would have included Friendly Persuasion (Quakers in Indiana during the war); it was said to be his favorIte movie.  It is easy for more than a whiff of self-righteousness to creep into even a good movie about the Civil War these days (see, for example, Glory and Lincoln), but this underrated gem is free of it.