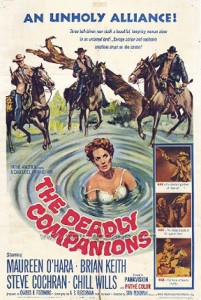 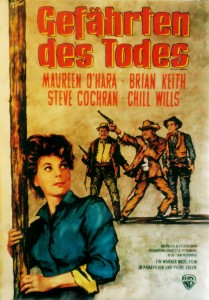 A low-budget revenge western, this is Sam Peckinpah’s first movie after an apprenticeship as a writer and director of television westerns.  Mostly it’s slow moving, with a minimal guitar score for music.

Yellowleg (Brian Keith) was a Union soldier in Missouri during the Civil War.  A rebel sergeant tried to scalp him, and he’s been hunting for the rebel for the five years since the war ended.  He also has a rifle ball near his collar bone which impairs the functioning of his right (shooting) arm.  In the movie’s opening scene, he saves Turkey (Chill Wills) from being hung as a card cheat, and persuades Turkey and his gunslinger companion Billy Keplinger (Steve Cochran) to join him in robbing the new bank in Gila City, Arizona Territory.

Once in Gila City, they find another gang in the process of robbing the bank.  In the ensuing shootout, Yellowleg’s impaired arm causes him to accidentally shoot and kill the son of saloon girl Kit Tildon (Maureen O’Hara).  She feels rejected by the respectable elements of Gila City and is determined to bury her son next to his father in the ghost town of Siringo in Apache country.  As penance Yellowleg determines to help her and dragoons Turkey and Billy into joining him.  Kit understandably despises them all.

When Billy attacks Kit, Yellowleg drives him away, and Turk slips away, too.  Yellowleg is forced to steal a horse from the Apaches, and one of them starts hunting him, killing his horse.  Eventually Kit kills the Indian with a shotgun, and Kit and Yellowleg finish carrying the boy’s coffin to Siringo.  There Turk and Billy get the drop on them, now having robbed the bank in Gila City themselves.  Kit tries to talk Yellowleg out of taking his revenge on Turk, who is the rebel he’s been hunting.  Eventually, Turk and Billy shoot each other, and Yellowleg almost scalps Turk.  But he quits in disgust, just as the Gila posse shows up to take possession of the increasingly deranged Turk.  (Billy’s dead.)  Yellowleg and Kit complete the burial and ride off together.

Brian Keith was cast as the lead in this because of his success with Maureen O’Hara in The Parent Trap.  He had also starred in Peckinpah’s short-lived western television series The Westerner, and he used his influence to bring in Peckinpah as director.  Maureen O’Hara and her brother Charles Fitzsimons had a role in producing the film, and that’s O’Hara singing the film’s theme song over the opening and closing credits.  Peckinpah did not get on well with Fitzsimons, beginning his well-earned reputation for avoiding and clashing with producers.  Peckinpah at first thought that Fitzsimons was hiring him to do work on the script and arrived at their first meeting with pages of edits, only to be told that changes were not wanted.  The first-time director also tried to minimize some of the more obvious flaws of the script, such as the problem of carting a dead body for five days across a hot desert.  He said: “At least I kept off [the dead body] enough that we weren’t too conscious off it.  To do it realistically would, I suppose, have been a lot of fun.  You’d have buzzards flying all over them and wearing masks and so on.”

Similarly, Peckinpah was not allowed to participate in the film’s final edit.  The editing’s a little disjointed in places, and there are some strange camera angles.  Sometimes the action is hard to see in the dark, and the music seems cheap.  The plot takes a back seat to the development of the relationship between Yellowleg and Kit.  Strother Martin is the preacher in Gila City.  The violence here is more muted than would be the case in future Peckinpah westerns.  The movie is kind of slow and gloomy in tone.  Cinematography is by William Clothier.  In color.

This is notable at all only because it was directed by Peckinpah.  Peckinpah’s second film, Ride the High Country, would be clearly superior in just about every respect—one of his two masterpieces, in fact.

Because producer Fitzsimons forgot to put a copyright notice on the film, it slipped into the public domain.  That’s the reason that, until recently, it was available only on a variety of awful DVDs.  As of May 2013, a new edition released by VCI Entertainment and produced by the archivist Cary Roan had the best picture quality and sound for this film yet seen on home video.  The picture is much better, but the sound still has a lot of hiss on the track.