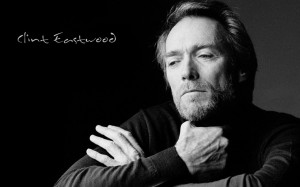 Many of the best directors of western movies were paired with a specific actor—one with whom they liked to work and with whom they did some of their best work.  For example, John Ford-John Wayne, Anthony Mann-James Stewart, Budd Boetticher-Randolph Scott are well-known teams.  The best living director of westerns is Clint Eastwood, who is also similarly paired with the greatest star of western movies in the post-John Wayne era:  Clint Eastwood, the actor.  Neither of them has made a western in more than twenty years, and it appears increasingly unlikely that either of them will again, since they are in their 80s.

Clint Eastwood directed three of the 55 great westerns, and his star in all three was Clint Eastwood:  The Outlaw Josey Wales (1976), Pale Rider (1985), and Unforgiven (1992).  Although he has appeared in many of the films he has directed, he has also received acclaim as a director for films in which he does not appear as an actor, such as Mystic River (2003) and Letters from Iwo Jima (2006), for which he received Academy Award nominations.  So we can assume that if he were so inclined and could find the right lead actor, he could do an excellent job on a western in which he himself did not star.

Clinton Eastwood Jr. was born in San Francisco, California, in 1930.  After a stint in the army at Fort Ord in the early 1950s, he was hired by Universal as an actor in 1954, although he had little experience.  He was criticized for his stiff manner, his squint, and for hissing his lines through his teeth, features that would become lifelong trademarks as an actor.  He had a number of mostly uncredited bit parts in movies and television before being cast in 1958 as Rowdy Yates in Rawhide, an hour-long television series about cattle drives. 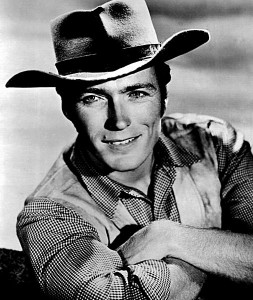 In 1963 he got the chance to work in Spain for the relatively unknown Italian director Sergio Leone in A Fistful of Dollars.  He was to be paid $15,000 with a bonus of a Mercedes upon completion, for eleven weeks’ work.  “In Rawhide I did get awfully tired of playing the conventional white hat.  The hero who kisses old ladies and dogs and was kind to everybody.  I decided it was time to be an anti-hero.”  That was his big break as an actor in movies.  It led to two more spaghetti westerns with Leone (For a Few Dollars More and The Good, the Bad and the Ugly) and international stardom in westerns.  He starred in Hang ‘Em High, Coogan’s Bluff for director Don Siegel and Where Eagles Dare, moving out of the strictly western star category and into action roles with the Dirty Harry movies, again with Siegel.  He continued to make westerns such as Two Mules for Sister Sara, but not exclusively.

In 1967 Eastwood formed Malpaso, his own production company.  In late 1970 he started directing his first film, Play Misty for Me, in which he starred with Jessica Walter.  It was well-received on its release the following year and established that Eastwood could direct and star in a film at the same time.  In 1973 he directed his first western, High Plains Drifter, involving a mysterious stranger in a brooding western town, themes that he would revisit in Pale Rider.  Eastwood released the first (and for many, still the favorite) of his great westerns in 1976, The Outlaw Josey Wales, although the western as a movie genre was waning.  It was one of Time’s “Top 10 Films of the Year.”  He continued his success as an action star, making five Dirty Harry movies in all (directing the fourth) and Escape from Alcatraz in 1979. 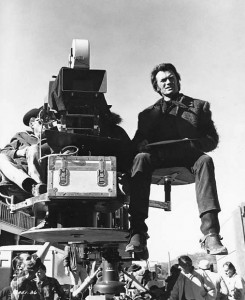 In the 1980s, he made films with western connections that were not traditional westerns, such as Bronco Billy and Honkytonk Man.  And finally in 1985 he released Pale Rider, a variation of the Shane-Mysterious Stranger themes, which received a certain amount of critical acclaim and did well at the box office, too.  With various ups and down, Eastwood was in a quieter period of his career, until in 1992 he made and starred in Unforgiven from a script that had been kicking around Hollywood for a couple of decades.  It opened to his strongest critical reception yet.  In addition to making money, it won the Academy Awards for Best Picture (going to Eastwood, since he had produced) and for Best Director, firmly placing Eastwood in the top echelons of the directing profession.  It was to be his final western.

Eastwood has since won another Best Picture and Best Director Academy Award, this time for Million Dollar Baby (2004).  He was nominated again in both categories for Mystic River (2003), although he didn’t win.  In 2006 he released two films about the World War II battle for the island of Iwo Jima:  Flags of Our Fathers and Letters from Iwo Jima, the second from the Japanese point of view.  They were both well-reviewed; if anything, the second had a stronger reception, being nominated both for Best Picture and Best Director Academy Awards. 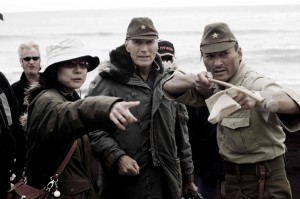 Known as a fan of jazz, Eastwood has increasingly provided the music for his films, having composed the film scores for Mystic River, Million Dollar Baby, Flags of Our Fathers, Grace is Gone, Changeling, Hereafter, J. Edgar and the original piano compositions for In the Line of Fire. He wrote and performed the song heard over the credits of Gran Torino.

Eastwood continued his success as a director with Gran Torino (2009) and Invictus (2009), based on the story of the South African team at the 1995 Rugby World Cup.  He dedicated Unforgiven “To Sergio and Don,” an apparent reference to Sergio Leone and Don Siegel as his mentors in directing.  Having now directed over 30 movies, he is one of the few successful actors to have enjoyed a similar level of achievement as a director.  Unlike such directors as George Stevens or William Wyler, he is known for his efficiency as a director, reducing the number of takes of scenes, streamlining filming time and bringing movies in under budget.  He works without the formality of storyboards (meaning that he does that work in his head before shooting), and without yelling “Action!” and “Cut,” which he thinks interrupts the actors’ processes.  Like Woody Allen, he is thought of as an “actor’s director,” meaning that he is very careful in casting his films and mostly lets his actors bring to their performances what he saw in them initially and whatever their imaginations may provide, with only the occasional suggestion.  Eastwood is fond of low-key lighting and back-lighting, which tend to give his movies a noir-ish feel. 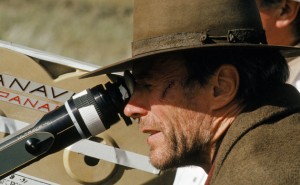 “Everybody wonders why I continue working at this stage.  I keep working because there’s always new stories. … And as long as people want me to tell them, I’ll be there doing them.”  (2010)  Nearing 84, he seems unlikely to come out with another western, but fans can always hope.  “Westerns.  A period gone by, the pioneer, the loner operating by himself, without benefit of society.  It usually has something to do with some sort of vengeance; he takes care of the vengeance himself, doesn’t call the police.  Like Robin Hood.  It’s the last masculine frontier.  Romantic myth, I guess, though it’s hard to think about anything romantic today.  In a Western you can think, Jesus, there was a time when man was alone, on horseback, out there where man hasn’t spoiled the land yet.”—Eastwood, on the allure of portraying western loners, quoted in Michael Munn’s Clint Eastwood: Hollywood’s Loner (1992).

The best biographical look at Eastwood and his work to date is probably by his friend, film critic and historian Richard Schickel, with his 1996 Clint Eastwood:  A Biography and Clint Eastwood:  A Retrospective (2010).  Obviously, the definitive work on Eastwood has yet to be written.