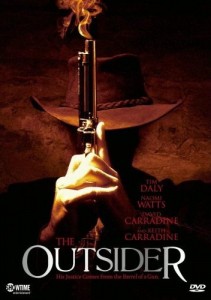 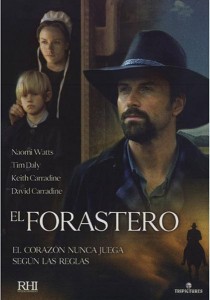 This slow-moving relationship drama is set in Montana, a variation on a theme of Angel and the Badman from 1947.  Good acting power is in evidence, though; Tim Daly is convincing as gunman Johnny Gault, and Naomi Watts (before she really became a big star) is even better as young widow Rebecca Yoder of the Plain People, who takes in the badly wounded Gault and nurses him back to health.

Based on a romance novel by Penelope Williamson, this is one of the few westerns directed by a woman, and it’s better than you’d expect.  (The reduced expectations are because of the nature of the source material, not because the director is a woman.)  As usual, there are three conflicts going on in this plot:  the clash/attraction between Gault and Yoder as man and woman, the clash between the worldly Gault and the Mennonite-like Plain People, and the clash between Gault and those who’d oppress both him and the Plain People with violence.  In only one of these conflicts might Gault’s talents with violence prove helpful, and even then numbers favor the bad guys (although a relatively low budget may have kept down the number of them who appear on film). 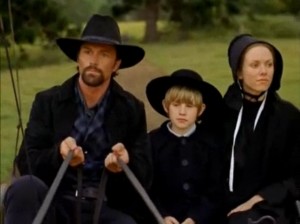 The gunman takes the young widow and her son to church.

Not only are the Plain People religiously separate, they raise sheep in cattle country.  Rebecca’s husband was killed by the real bad guys, who wanted (and still want) her land.  The real bad guys are the usual collection of local banker-cattle baron (John Noble) and his hired gunmen.  Keith Carradine is one of the Plain People, presumably romantically interested in Rebecca; his real brother David Carradine plays the sympathetic local doctor.  Thomas Curtis is good as Benjo Yoder, Rebecca’s young son.  An interesting touch is the music, based mostly on Norwegian folk songs, although the film sometimes seems self-consciously arty in its use of both music and images. It seems to take a long time getting to dealing with the conflicts.

There are the usual scenes of the wary gunman trying with very limited success to mesh with the religious community for the sake of the young widow.  There is the sizing up by others in her community who are trying to assess both Gault and the nature of the relationship that’s apparently in formation.  There is the developing relationship between the gunman and the traumatized young son of the beautiful widow.  And there is the resistance by both the gunman and the widow to the attraction they’re feeling to each other, along with questions about how much each will have to accommodate the other’s beliefs and ways of life if they do go ahead. 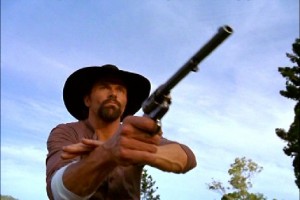 This version of the story isn’t as sympathetic to religion and the strength of community as Angel and the Badman, and it ends with Rebecca leaving the Plain People when she marries Gault, although Gault appears to make some accommodations, too.  Of course, the religious community here projects a little more paranoia and pressure toward conformity, and fewer warm fuzzies than the Quakers in the John Wayne movie.  Although music isn’t allowed outside of church, Rebecca hears “the music of the earth,” signaling that maybe the Plain People aren’t her real destination anyway.

The story of a gunman entering a religious community with very different values is one of the oldest western stories, a variation on the Mysterious Stranger theme.  It was the basis of Zane Grey’s 1912 best-seller Riders of the Purple Sage, for example, where the violence wins because of the inherent dishonesty of the religious community.  (Check here for one of the more recent film versions of Purple Sage.)  This is much more like the 1947 John Wayne movie, where the validity of the religious community seems to be recognized, except that (a) the violence from the gunman is still necessary to resolve matters, and (b) the widow ultimately leaves the religious community instead of the gunman joining it.  Presumably there is still some kind of uneasy affiliation remaining there, rather than a shunning from the community, though.  At least the bad guys have been dealt with.  A non-western version of the story is 1985’s Witness, with Harrison Ford as a hard-boiled cop among the Amish in Pennsylvania. 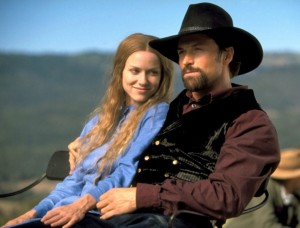 There are echoes of other westerns in this.  The gunman coming to know and appreciate both the widow and her son is much like the main story arc of Hondo.  And the cattle baron and his men trampling a gathering of the Plain People (while Gault rescues the young son of the widow) reminds us of a similar scene with the homesteaders in Shane.  The culminating shoot-out with the bad guys (and they are undeniably bad) is satisfying, except that Rebecca Yoder is accidentally shot and appears to be dying.  Gault symbolically places his pistol in the blacksmith forge, in a scene that reminds us of other gunmen’s similar renunciations:  Gary Cooper tossing his badge in the dirt in High Noon; Glenn Ford burying his guns at the end of The Fastest Gun Alive and The Last Challenge; and Randolph Scott giving up his guns at the end of A Lawless Street, for example.  And, most of all, John Wayne giving up his guns at an inopportune moment at the end of Angel and the Badman.

Timothy Daly is good enough in this that one regrets he had no other chances to make westerns.  In addition to a revolver, Gault also uses something that looks like a cut-down rifle, like the mare’s leg used by television’s ethical bounty hunter Josh Randall (played by Steve McQueen) in Wanted:  Dead or Alive in the late 1950s.  If the vegetation doesn’t entirely look like Montana, that’s because this was filmed in northeastern Australia.  They’re careful to keep eucalyptus trees out of it, though, and it’s not distracting.